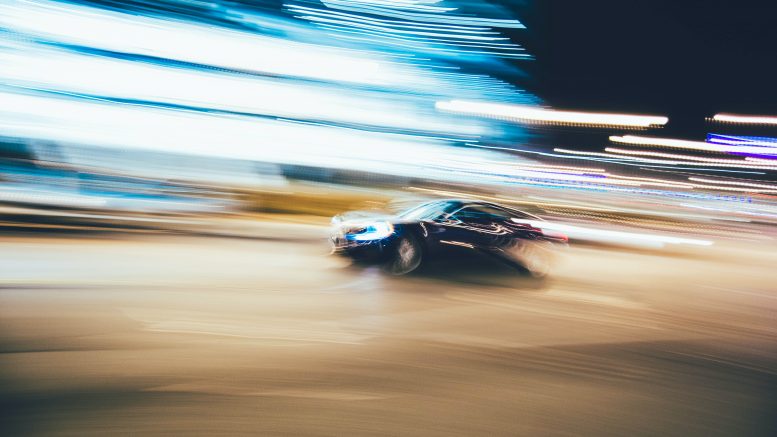 By Blynn Beltran and Clifton Bullock

A new law is cracking down on disruptive “sideshows” in traffic by threatening the driver’s licenses of those involved.

The term sideshow is shorthand for would-be attention seekers performing stunts with powerful cars, often in the middle of a busy road at night. These events often feature drivers spinning their cars in circles – performing “donuts” – as passengers hang out of the windows and nearby spectators cheer. According to authorities, sideshows have led to traffic jams and serious injuries.

The new law AB-3, which will go into effect on July 1, 2025, equates sideshows with “exhibitions of speed,” enhancing the penalty for participation in a sideshow. The bill used a broad term for classifying a sideshow activity. Illegal drag racing and doing “donuts” are considered sideshow activities.

Previously, a person involved in exhibitions of speed – if convicted – could be punished with imprisonment in county jail for up to 90 days, along with a $500 fine. AB 3 will allow judges to add suspending driving privileges to the penalty. Offenders could see their licenses frozen for 90 days to 6 months. The law does include work-related carve-outs.

California Highway Patrol Officer Eulogio Ceja, assigned to Sacramento’s Valley Division, said sideshows are a huge problem, from the Capital City to streets of Southern California. He stressed they endanger the lives of participants, spectators and bystanders alike.

Cities reportedly saw an increase in street racing and sideshows during the pandemic lockdowns, in part because there were fewer vehicles on the road. The CHP responded to 25,953 calls involving a motor vehicle speed contest, or exhibition of speed, in 2020 – nearly 3,500 more calls than the prior year. In the same period, CHP cited 341 individuals with a violation, 141 more than before.

“That’s one of the issues that we are trying to combat, to make sure that everybody gets home to their destination; make it safely,” Ceja said. “The last thing we want to do is get stuck in a sideshow, and be involved in some kind of accident, because of the sideshow.”

The CHP currently receives a grant through the Office of Traffic Safety called CARS IV that provides overtime hours for undercover details, as well as funding extra patrols. The grant also allows hours for undercover investigators to track social media, trying to determine where sideshows will occur. Additionally, the CARS grant provides resources for CHP officers to go to several high schools and give presentations on the dangers of sideshows.

“When education starts rolling out as to what the consequences are or going to be regarding this issue, it’ll deter a lot of people and hopefully reduce the number of sideshows that take place,” Ceja predicted.

Damian Kevitt, executive director of the advocacy group SAFE – short for Streets Are For Everyone – endorsed AB-3, explaining it’s an important step because it gives law enforcement an additional tool and is an additional deterrent.

“It’s not going to solve it [sideshows], it’s not a magic bullet that’s going to handle this,” Kevitt acknowledged. “As a street safety advocate, I’m so concerned to hear about the stories of lives lost on a daily basis across California.”

“In my opinion, its [AB-3] is watered down a bit and it’s not going to be implemented until 2025,” he observed. “I don’t understand why you have to wait that long to implement something that you know is going to save lives. What’s the point of that?”

The work provision for suspended licenses in the law irks Kevitt as well.

“Hey, if they’re doing something where you’re going to lose lives, I’m sorry,” he offered. “The right to life is much more important than the right to drive.”

While some car enthusiasts support AB-3, others oppose it – and question whether it will have any effect on current laws.

One fan of the controversial street action, who spoke on condition of only using his first name, Matthew, acknowledges he’s been to sideshows in Sacramento and the Bay Area.

“From personal experience, if you get caught, you get your car impounded for a sideshow, even if you aren’t driving,” Matthew said. “They will impound your car and send a ticket through the mail … I got two [tickets] both from the Bay, and they were $300 each. I still haven’t paid one off.”

Matthew added that one of his tickets came when officers pulled him over for speeding and then associated him to with nearby sideshow.

“They have everything,” Matthew said about the CHP’s ability to prosecute sideshow attendees. “They have helicopters equipped with police scanners that can scan your car’s license plate.”

Daniel Chavez works in construction and often attends car meets around the Sacramento area. He said that the bill would not be effective in slowing down sideshows.

“I didn’t even know that if you get caught watching that you get cited,” Chavez said when asked about the bill. “It would just put more tax money into locking people up.”

On the other hand, Fairfield mechanic Pete Mitchell backs the bill’s intentions.

“I’m not a sideshow guy,” Mitchell admitted, leaning against his Toyota sedan. “It’s not cool because it’s not safe for everybody. Not everybody knows how to drive.”

He noted there are legal ways of fulfilling sideshow urges by going to a local track.

“There’s nothing wrong with getting a little loose when it’s wet outside or whatnot, but we take it to the track and we do it the right way,” Mitchell offered. “Being that there was a takeover in the last two years. Everybody was shutting down freeways and main intersections. A lot of people are getting hurt.”

One example is Austin Dubinetskiy, a 21-year-old Sacramento State student received severe injuries after a car ran over him during a Natomas sideshow in 2020.

“You wanna drive like that? Take it to the track,” Mitchell stressed. “We don’t want to have the police sweating out here.”