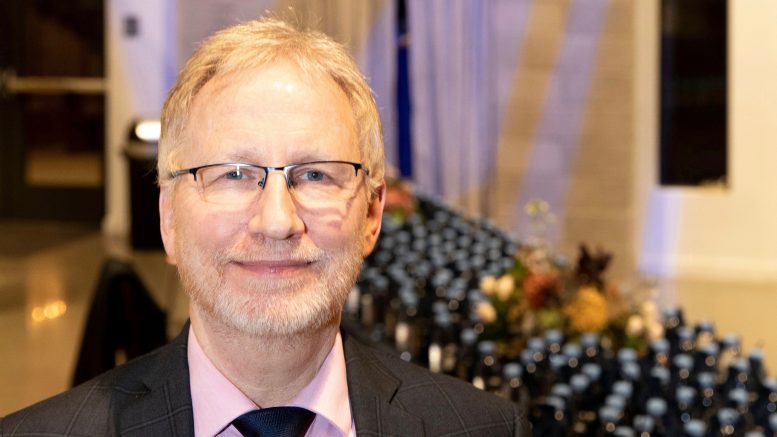 After three decades of building a theater company in Sacramento, Buck Busfield is stepping away. Courtesy photograph

After more than 35 years as one of the central pillars of the Sacramento theater scene, B Street Theatre’s Buck Busfield is exiting stage left.

Buck, who first joined his brother Timothy Busfield in 1986 to help launch a local touring children’s theater – and eventually expanded it into the current “The Sofia: Home of B Street Theatre” – recently announced his retirement. Having held the mantle of producing artistic director and manager of the theater company, Busfield is handing over the reins to new leadership this summer.

Busfield told SN&R his current responsibilities will be split, with Assistant Artistic Director Lyndsay Burch elevated to Artistic Director, and a national search conducted for a managing director.

“Lyndsay was the student and now she is the master,” Busfield said, noting her growth from intern in 2013 to an essential part of the company. “She understands our unique relationship we have formed with the community.”

“I’ve shadowed Buck over the years – he’s been a mentor and a guide,” she said. “Many people here don’t realize the national profile and recognition B Street has, their commitment to creating a theater family, and their dedication to stage contemporary plays.”

Both Busfield and Burch say they don’t anticipate any major changes ahead, though they say the theater will continue to push for more diversity in scripts, casts, and audiences.

Busfield has been the central figure in the company’s various developments, including what is now known as “The Sofia: Home of B Street Theatre.” Over the years, he’s built the original children’s theater program into a larger vision that first included the B Street Theatre before melding into the current Sophia theater complex that houses three stages and produces theater productions and musical concerts.

It was turning 70 years old that made Busfield realize he was ready for a change, and that the theater was ready for new leadership. Some of the epiphany came with the recent COVID shutdowns, but also included reflecting with pride on the theater’s overall growth.

“COVID closures gave us a chance to pause and reflect on who we were and where we are going,” Busfield acknowledged.

Though, regrettably, he had to lay off some staff due to the shutdowns, B Street was able to keep a core group and pay rent thanks to grants and donations.

In addition, the Sofia was able to produce virtual programming five times a week, totaling more than 270 shows, with Busfield giving credit to the staff, actors, board members, donors, community leaders, city and county board members and subscribers for keeping the theater afloat.

Fans of The Sofia: Home of B Street Theatre say one of its unique qualities involves the creation of a theater family with a core group of actors who have such rare theatrical benefits as health insurance.

“It becomes clear that if you use the same actors, the audience gets to know them and forms a lasting relationship with them,” Busfield observed.

And those relationships remain tight, with accolades flooding in to express gratitude for Busfield’s mentorship, friendship, and guidance over the years. So many heartfelt thanks were forwarded for this article that we included all of them at the end.

A few samples from B Street Theatre’s Acting Company Members:

“It’s hard to explain the world Buck built for his actors over the decades,” said Stephanie Altholz. “He created one of a handful of theaters in the country that has a safe, fantastical, brilliant, and fun company. So few actors can pay their bills from theater and he did that for all of us.”

“Buck’s skill as a director is hard to match but it’s his foresight and drive that’s been able to establish B Street Theatre as an important part of Sacramento arts culture,” explained Peter Story. “He has created a legacy that is still continuing to grow and put Sacramento on the theater map.”

“Buck has made me laugh, really laugh, hysterical hernia-inducing tears-streaming laughter for over 30 years,” said Greg Alexander. “He made it possible for a band of theatre artists to call Sacramento home. The legacy of Buck and B Street is a source of great pride and gratitude for the entire community.”

Busfield gives a nod to his brother Tim, who helped develop the initial children’s company and then open up the original theatre on B Street in 1991. The brothers chose Sacramento for a couple of reasons, he said, including that it was an hour’s flight from Hollywood where Tim had his acting career. Sacramento also had a dearth of live theater at the time.

“The only professional theaters using equity actors were the Sacramento Theater Company and the Music Circus, so we knew we could fill a void,” Busfield remembered. “The theater landscape was ripe, and I was ready for a new adventure.”

So, they found an empty warehouse on B Street in Midtown and plunged in, equipping it with a stage, risers, bathrooms, dressing rooms and a lobby. And soon B Street Theater was open and offering theater experiences.

“The community was ready for us,” recalled Busfield, though he acknowledged that the theater community was “a bit hesitant thinking we were too Hollywood.”

He quickly proved them wrong.

“To this day, I can’t believe it happened,” Busfield, guessing that his theater company has hosted more than 600 main productions and concerts both at the B Street location and at the new Sofia complex.

Though Busfield says it’s not his nature to reflect, the retirement announcement has forced him down memory lane a bit.

“With the opening of the Sofia in 2018, I see the bond of love continue between the community and our theater,” he admitted.

Though he has witnessed many successes, Busfield has always felt “a sense of fear, that we are one bomb away from hurt and three bombs away from failure.”

So far, the bombs have not fallen.

In retirement, Busfield will step back from the day-to-day operations, but will continue to be involved as a board member and consultant. He may even continue on as a playwright. All these years he’s penned an annual holiday play.

• “His work has been a gift to hundreds of performers, hundreds of thousands of children and adult audience members, and many other professionals and staff throughout the Sacramento region.” – Kurt Johnson, Acting Company Member

• “At the age of 15, Buck was the instructor of my very first acting class. Over the years, he helped me to discover the range of my talent and helped me develop my confidence as an actor.. He is a truly inspiring soul.” – Amy Kelly, Acting Company Member

• “Buck has always combined the perfect measure of hard work and sheer delight. Doing a show at B Street is thrilling, challenging, and always, always laugh-until-you-cry fun. Buck gave us all the space to grow as artists.” – Julia Brothers, Acting Company Member

• “Buck Busfield’s greatest legacy is his vision. No one has done more to grow the theatrical arts in the Sacramento region than Buck and the B Street Theatre. Literally millions of children have been exposed to theatre as a result of his ambition.” – Dave Pierini, Acting Company Member

• “Buck Busfield made me a better actor. He knew my process before I did. He gave us a home to create our family and create friendships to last a lifetime.” – Stephanie McVay, Acting Company Member

• “Almost twenty years ago I left Los Angeles to live and work with this island of misfit toys because Buck Busfield has the ability to mine gold from anything. He can mine the best talent from a smallish market like Sacramento, can mine comedy and drama from a mediocre play and make it great and can mine conflict and humor from a great play and make it even greater.” – Jason Kuykendall, Acting Company Member

• “At the age of 15, Buck was the instructor of my very first acting class. Over the years, he helped me to discover the range of my talent and helped me develop my confidence as an actor. Through B Street, he gave me a plethora of opportunities and is one of the main reasons I chose acting as a profession.” – Amy Kelly, Acting Company Member

• “At 20 years old Buck plucked me from a south eastern theater conference and brought me into the folds of what would soon become my most valued community flush with lifelong friendships. For many of us he provided a foundation for our craft and instilled the signature B Street brand of off-beat, honest, and heartfelt comedy, with a shared and burning mission to nurture budding artists.” – Tate Hanyok, Acting Company Member

• “It’s impossible to say in a few words how much Buck has meant to so many people. He has forever enriched our lives, not just as artists, but as human beings. That’s so significant.” – Dana Brooke, Acting Company Member

• “Buck is a man who possesses an abundance of intelligence, talent, and will. His mastery with that toolset has forged an institution that has benefited a myriad of artists like myself, as well as the community in which it is nestled. I am so incredibly grateful to have most of my career associated with Buck and the B Street Theatre.” – John Lamb, Acting Company Member