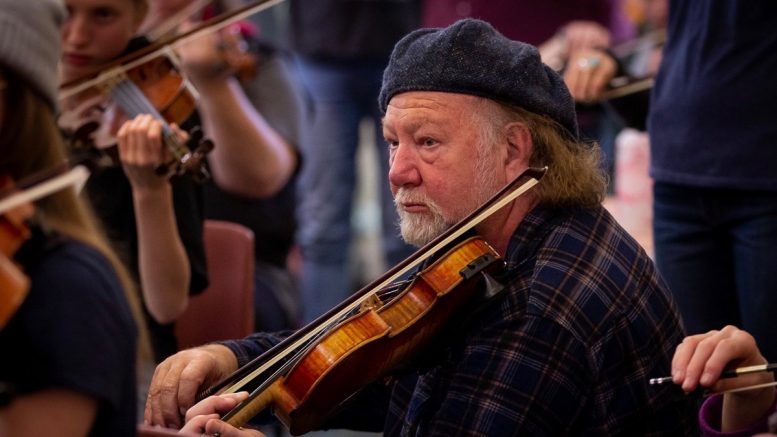 There’s still an echo of Celtic wanderers who poured their dreams into the American West. They arrived from the Scottish Highlands with old fiddles and surly fortitude. They sailed from Ireland with Bodhráns in their packs and nothing in their stomachs. They brought the all-brawn of Cornwall to our hills, along with all the grace of its haunting choirs.

They came for the promise of gold. They stayed to help forge a new California.

Four generations later, one of Scotland’s most celebrated fiddle players arrived in Nevada City, a former frontier town built largely on the backs of those pathfinders. Alasdair Fraser may get offers to perform around the world, but he says he’s just as happy playing locally because he knows there’s a link between his adopted home and the misty lochs and meadows that first bred his love of music.

On February 9, he’ll perform at Auburn’s 92-year-old State Theatre with cellist Natalie Haas. The concert comes on the heels of Fraser joining forces with fiddle fanatics from across the nation – summer after summer in Nevada City – to explore a sonic legacy of the West. His upcoming show in the foothills will be another chance to honor a lost moment when traditional Celtic notes grew the roots of folk-Americana.

Fraser grew up in a small Scottish village near Stirling, which was an epicenter in the country’s wars of independence. The blood and sacrifice of those battles remains a precious memory on the landscape woven deep into the surviving songs of its people. Fraser spent his early life contemplating the ways that culture can carry through the wood neck of a fiddle. And his passion for the heritage is still burning. His rendition of “Grand Etang & Hull’s Reel,” recorded as a duet with Haas, is eerily transporting, especially as the fiddle brings its pressing power to ever-sweeping heights—a bounding, slashing string-sear that whirls with a pained sense of remembrance.

In 1985, Fraser walked away from the corporate job that had transplanted him in San Francisco and decided to devote himself entirely to performing. He soon stumbled upon Nevada City, where he saw signs of a community as obsessed with the arts as he was. He made it his base.

“I found this wee town and there were seven theater companies and live music in every bar,” he recalls. “But I’m still very much tied to where I grew up. In many ways, I feel like I’m kind of a long umbilical cord from Scotland.”

Though still performing as far away as Ireland and Spain, for 14 years Fraser has hosted the annual Sierra Fiddle Camp in Nevada County, an event that allows amateur and aspiring musicians to play alongside some of the best masters of the form. The last camp before COVID explored how the instruments and styles that Scottish, Irish and Cornish miners brought to the Gold Country slowly began to evolve.

“The beautiful thing is they all have wonderfully distinctive little nuances and touches that differentiate them,” Fraser said. “It’s related to dialect, to language, to climate … But it’s all music that takes you down through the ages—you meet the ancestors.”

While Fraser’s camps teach the ageless approach of the isles, they’ve also featured other masters, including Bruce Molsky, a top Southern Appalachian-style fiddler, and Darol Anger, a noted composer who puts fiddle work into old-time jazz.

“We’re taking those elements, along with the Celtic awareness, and bringing it into this crucible—this experiment,” Fraser says. “But it’s not just about going back. It’s also about saying, ’What do you do when you have people who are enthusiastically exploring these old sounds, but are also asking, ’What now?’ It’s not 1849. What are we saying with this music today? How is it relevant?’”

Fraser’s February 9 concert at the State Theater will, per the venue’s rules, require proof of vaccination or a negative COVID test within 24 hours of showtime. Tickets can be purchased on the State’s website. Fraser himself will just being landing back in town that day after a two-week tour of the American Midwest. Like many Sacramento-area musicians, he’s glad that the turmoil of late won’t stop him from playing for a hometown crowd.

“All systems a-go,” he offers with a chuckle.

Scott Thomas Anderson is also the host of the ‘Drinkers with Writing Problems’ podcast, episode 2 of which – ‘Edinburgh & Islay’ – includes audio interviews and fiddler performances from Alasdair Fraser.

Be the first to comment on "Distant callings: renowned fiddler from Scotland helps the region find its past"