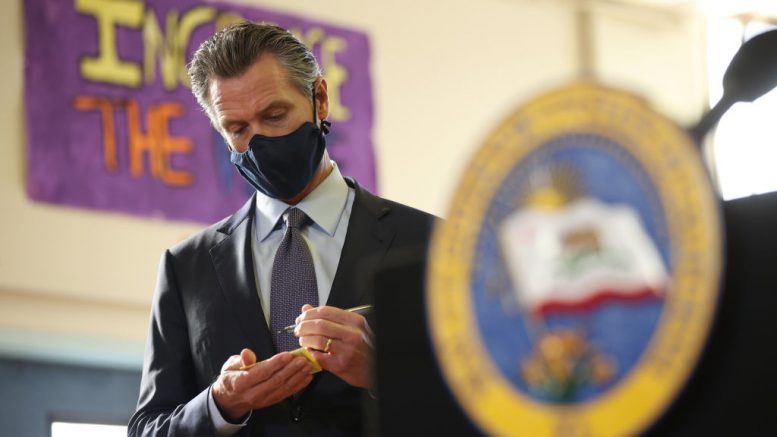 As the California governor heads into re-election mode, we examine his progress (or lack thereof) in several healthcare categories

Gov. Gavin Newsom’s 2018 campaign for office was rife with decisive and promising language on health care. Newsom pronounced himself solidly behind a single-payer form of universal care, saying there was “no reason to wait…I’m tired of politicians saying they support single-payer but that it’s too soon, too expensive or someone else’s problem.”

For the better part of two years, though, Newsom has been doing what most governors in the U.S. have been doing: navigating the COVID landscape, and pushing other health care issues to the side. Not only did the pandemic expose gaping holes in California’s health care delivery system, but it infected and killed in disproportionate numbers the same populations who’ve long suffered unequal treatment: Blacks, Latinos, lower income and immigrant workers.

Much of the Newsom administration’s energy has gone into fighting COVID’s spread. But as 2022 approaches and a November re-election campaign heats up, the governor is likely to be questioned about his progress — or lack thereof — in a number of health care categories.

Newsom has long championed plans to reduce drug costs for California patients. But deep into his first term, the governor has made little headway. According to the California Department of Health Care Access and Information, the median wholesale cost of selected drugs has shot up nearly 21% over a three-year period. In the fall of 2020, Newsom signed a bill that may ultimately lead to the development of a generic drug system that is administered by the state, and such a system could dramatically lower the prices of certain products. But it could take years to develop, and for now, Californians buying drugs, especially prescription drugs, still face escalating costs along with the rest of the country.

Under Newsom, the state’s health insurance program for low income and disabled people has been pushed in a new direction, with nearly $6 billion in state and federal funds directed over the next five years at a specific group of Californians. The idea is to reach people who are homeless or at risk of becoming so, along with those who often use emergency rooms (perhaps as their only source of care) and people in expensive institutions: jails, mental health clinics, nursing homes, etc. The program goes beyond normal Medicare services to fund such efforts as buying healthy groceries, paying deposits on living spaces and covering certain bills. Newsom touts the program as one that will help get people off the streets, deal with addiction and treat mental health issues. But managed-care insurance companies, not Newsom’s administration, will be the ones to decide who actually gets the help, and skeptics already question that arrangement.

In 2019, Newsom issued an executive order to create a “Master Plan for Aging,” as his administration put it. With the over-65 demographic expected to account for a quarter of the state’s population by 2030, the plan lays out a variety of appealing goals: housing “for all ages and stages,” the closure of the equity gap for elder residents and the creation of more health care jobs, among others. Again, though, this idea will only begin to be realized over the coming decade, and many of the toughest questions, including how to finance it long term, aren’t likely to be addressed until after Newsom has left state government. The current dollars allocated to the project include some ongoing money and some one-time funding, raising questions about the plan’s viability.

Newsom has bitterly disappointed some who were drawn to his candidacy because he talked the talk on single-payer, in which a government-related source would pay for all health care costs in the state. Once in office, the governor quickly began to back away from that idea, using less specific terms like universal or umbrella care. Several organizations, including the California Nurses Association, are calling on him to get serious about the idea, and a single-payer bill by Sen. Ash Kalra (D-San Jose) will be introduced in January, forcing Newsom to state his case one way or another. Newsom did advance the cause of universal care this year, expanding Medi-Cal to include all low-income residents over age 50, regardless of their immigration status. That coverage begins in March of 2022.

No matter what else happens, Newsom will continue to be judged on his government’s response to the most significant statewide health crisis of the age. The governor’s track record with respect to the virus is remarkably uneven, with sensible and aggressive health policies — early shelter in place orders, strict guidelines on businesses and public spaces — often undone in baffling fashion. Too, Newsom has appeared to bend to the will of high-priority financial supporters, illustrated by his refusal to join an effort to order masking of state prison workers (their union is a major contributor) and his ill-fated tapping of health giant Blue Shield, a longtime Newsom funder, to run the state’s distribution of vaccine doses. With COVID still an unwelcome visitor and another rough winter ahead, the governor’s willingness to make hard decisions in order to manage the virus in 2022 will be closely watched.

Be the first to comment on "Looking back on Gov. Newsom’s healthcare wins and losses"