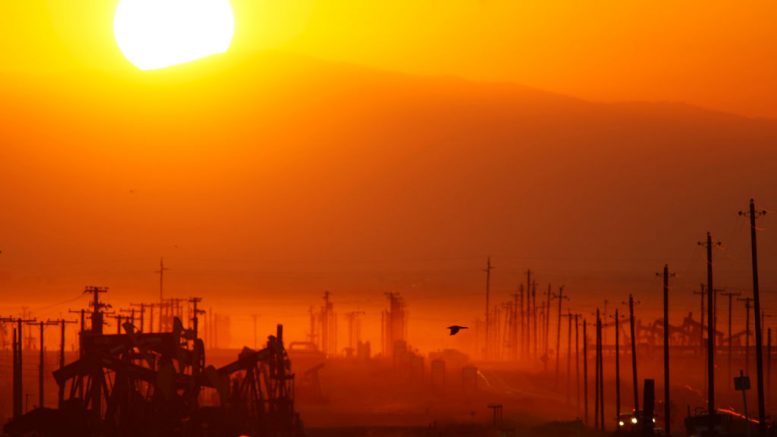 Development, oil and agriculture have long-burdened the valley with pollutants, and residents are tired of the EPA doing nothing about it.

For nearly two weeks at the end of November, the air in the San Joaquin Valley was too dirty to allow Dr. Catherine Garoupa White to safely go for a run outside. Garoupa White, who grew up in the valley and has asthma, gets text alerts on her phone when the air sensors near her home indicate that the air is unsafe to breathe. All across the valley, a network of sensors, run by a collaborative of environmental nonprofits known as SJVAir, outlines a picture of a region in crisis: For days, the area was bathed in orange (unhealthy for sensitive groups) and red (unhealthy for all groups) alerts.

Garoupa White says the air has been bad for as long as she can remember; indeed, the Central Valley has the worst air quality in the nation in terms of exposure to fine particulate matter known as PM 2.5, and it remains the only region in the nation that fails to meet a nearly quarter-century-old standard for PM 2.5 mandated by the Clean Air Act. As a result, “Our region has suffered epidemic sickness caused by air pollution,” says Garoupa White. Environmental justice groups in the area are fighting back against the smog; in November, a coalition of advocacy organizations filed a lawsuit against the EPA in federal court for failing to intervene in the region’s air quality crisis.

Garoupa White, executive director of the Central Valley Air Quality Coalition, an environmental justice group based in the San Joaquin Valley, uses an acronym to describe the sources of pollution in the region — D.O.A. The D stands for development, with pollution from the diesel trucks that carry goods to and from distribution centers as the logistics industry, spurred by the boom of online shopping, creeps into the region. The O stands for oil, flowing prodigiously in Kern County — a rich oil basin that produces 70% of the state’s onshore oil and 80% of its gas. The A is agriculture — the valley is the most productive agricultural region in the world, cultivating crops from strawberries to garlic, with pollution stemming from heavy industrial equipment used to harvest crops and the burning of agricultural waste. The mixture of these industries burdens the valley with a soup of pollutants, with PM 2.5 one of the worst offenders.

“The San Joaquin Valley is a sacrifice zone. We get all of the bad, all of the unwanted land uses,” says Garoupa White. “We get the waste, we get the pollution. We’re the dumping ground.”

Exposure to all of these sources of PM 2.5 can have profound impacts on the body. PM 2.5 is so fine that when inhaled, it penetrates deep into the lungs, entering the bloodstream, where it circulates throughout the body and damages organs. Long-term exposure is linked to an increased risk of asthma, decreased lung function, increased risk of heart attack, stroke and preterm birth. These health impacts shorten the life spans of those exposed; studies of air pollution in 2018 found that one in five deaths worldwide that year were linked to PM 2.5.

Climate change and coronavirus alike are making the air quality issues in the valley of higher concern than ever. A respiratory pandemic compounds the risk of PM 2.5, as the pollutant is linked to both higher transmission of COVID and increased COVID mortality rates. Increasing wildfire smoke brings additional spikes in PM 2.5 pollution. As a result of the intersecting crises, “our communities are even more vulnerable,” says Garoupa White. Exposure is also not equally distributed; the Central Valley has a larger proportion of people of color than the rest of the state, and a lower average income than the rest of California. Pollution in the state disproportionately impacts low income and nonwhite communities.

Greg Muren, an attorney with Earthjustice, the group leading the suit, says that the air quality problem in the valley is in part due to a failure to intervene by the EPA. If a state fails to meet air quality standards and fails to complete a plan to do so, the Clean Air Act requires the EPA to intervene and develop a plan for the state to meet those standards, such as forcing the state to adopt stronger air quality measures. The EPA has previously implemented federal plans to help states achieve air quality standards in states including New Mexico and Texas.

“Front-line communities here in California have seen continued inaction and failure from both the California Air Resources Board and Region 9 of the EPA,” said Estela Escoto, president of Committee for a Better Arvin, of the suit in a statement. “The EPA cannot posture themselves as world leaders on environmental justice while the most populous state in the nation has never met the most basic PM 2.5 standards.”

“These lawsuits often move fairly quickly,” said Muren. If the lawsuit is successful, Muren hopes that a plan will finally be made to get the region on track to hitting the Clean Air Act’s air quality standards. “Doing so would have really significant public health and environmental justice impacts in the valley,” he said. “It’s life and death for many residents.”

TOPICS:lawsuit against EPA in California over clean air failures