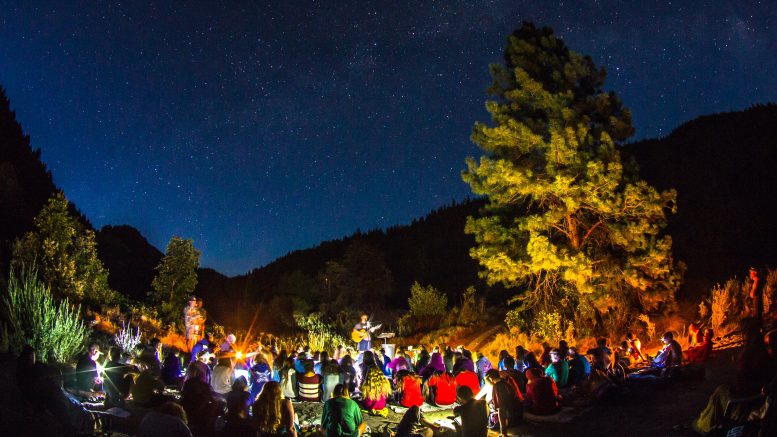 Outdoor enthusiasts enjoy the Happy Camp area along the Klamath River, which will soon have four major dams removed. Photograph by Danny Avila

If all goes as planned, the removal of four PacifiCorp Dams on the Klamath River that have blocked salmon and steelhead migration for over 100 years will begin in early 2023, according to Mark Bransom, executive director of the Klamath River Renewal Corporation, or the KRRC.

KRRC’s job is to take ownership of four PacifiCorp dams—JC Boyle, Copco No. 1 and 2, and Iron Gate—and then remove these dams, restore formerly inundated lands, and implement required mitigation measures in compliance with all applicable federal, state, and local regulations. PacifiCorp will continue to operate the dams in the interim.

The removal of the dams will open over 400 miles of the river and tributaries to spawning and rearing by Chinook salmon, coho salmon and steelhead trout — and improve water quality and temperature conditions on the river.

“We are on the cusp of realizing a number of additional important and significant steps that will ultimately lead, we believe, to dam removal,” said Bransom. “Conditions in the basin have been extraordinarily difficult, but we plan on doing major efforts on drawdowns of reservoirs by 2023. No later than late spring of 2023 there will begin 6 to 7 months of construction work to position for removal of the dams. The corporation is doing everything to complete the process.”

The implementation of the Klamath Hydroelectric Settlement Agreement that the dams are being removed under has been a “long and bureaucratically complex process,” according to Craig Tucker. Recently, the Federal Energy Regulatory Commission filed a “Notice of Ready for Environmental Review” for the project.

This review process is now underway, with FERC’s draft Environmental Impacts Report, or EIR, as required by the National Environmental Policy Act. That’s due out by February 2023.

Trout Unlimited California Director Brian Johnson, who was a lead negotiator in settlement talks, said the dam removal process “unlocks a lot of possibilities in the basin.”

Johnson also made several points to correct some myths about the dam removal process. Those include: the dams are not used for irrigation or municipal water supplies; the Klamath River won’t go dry in the summertime, since there is already water storage in Upper Klamath Lake. The dams are used only for hydropower – and not for irrigation or water storage as other reservoirs are. Johnson also noted that because the dams were not designed for flood control, there will be no meaningful loss in flood safety to residents that live along the river.

“The current dams would be full long before they could help in flood control downriver,” he said.

Additionally, he wants the public to know the sediment behind the dams is not toxic and has been sampled extensively.

Johnson did point out that there would be “short term impacts during construction,” but based on other dam removal projects in the country, he anticipated that the sediment would clear quickly. Finally, he noted that there are some conspiracy theories circulating, claiming that the salmon never made it above the four PacifiCorp dams – that there were lava flows that blocked passage of the fish.

Johnson countered that lava flows did impound the river – several hundred thousand years ago – but that natural erosion wore down those barriers many tens of thousands of years ago. He also said there has been carbon dating of bones of salmon on the river in Tribal fish camps well above the dams that confirm the migration of salmon and steelhead into the Klamath and tributaries above the dams thousands of years before they were built just over 100 years ago.

Kelly Delpit, a Klamath Basin farmer who represents Sustainable Northwest, also emphasized that the four PacifiCorp reservoirs do not provide water for irrigation.

“What it comes down to is what’s good for fish is good for farms, she emphasized. “Taking dams out will benefit fish, people and agriculture. Dam removal is a huge step towards bringing the Klamath Basin back into balance.”

Amy Cordalis, Yurok Tribe Lawyer, who introduced herself in the Yurok Language, said she is from a traditional fishing family from the Village of Requa at the mouth of the Klamath River. She underlined the urgency of dam removal at this time.

“The Klamath River used to be the third largest salmon producer in the continental U.S., but now it has only 1 to 3 percent of the historical runs,” said Cordalis. “Dam removal and restoration are vital for the entire river. When we are talking about the health of the river, we are talking about ecosystem-wide health. At the same time, we’ve been in a historical drought that puts additional pressures on the river.”

She added, “In this drought 80 to 90 percent of baby salmon have been killed over the past 4 years by the C. Shasta parasite in poor river conditions caused by the dams. there are also blue green algae blooms in summer where people can’t get in the water because it is harmful to their health … The Klamath River has been operated on minimum flows over the past 1-1/2 years. It is like keeping the river on life support. We can’t keep operating this way.”

Glen Spain, Northwest Regional Director for the Pacific Coast Federation of Fishermen’s Associations, pointed out how the continuing management of the Klamath under weakest stock management plays havoc on commercial and recreational fishing families from Oregon and Washington to Monterey.

“When the salmon leave the Klamath River, they go north and south,” Spain observed. “Salmon fisheries from Monterey to the Oregon-Washington border now are being managed by weakest stock management. There are not enough Klamath fish in the ocean and the fish are now suffering from a gauntlet of disease as they go downriver. What happens in the dams and rivers affects people for hundreds of miles up and down the coast.”

“We (commercial fishermen) are the same people as farmers – food providers – and we have a lot in common,” he emphasized.

Mark Bransom said his organization will make sure to implement a hatchery transition plan before the lakes are drawn down prior to dam removal. Under the KHSA, there will be temporary hatchery facilities at Fall Creek Hatchery and elsewhere. To meet the fish mitigation goals, PacifiCorp has already agreed to pay for fish hatchery operations at Fall Creek, which is owned by the State of California, for up to 8 years after dam removal.

Spain pointed out that there will be sediment flows on the river for a couple of years after the four dams are removed.  But he noted that hydrologists estimate that the fine sediments released by dam removal would flush to the sea within one or two winters, through the normal process of erosion.

“We are also timing the dam removal to take place during the wettest part of the season in February and January,” Spain said. “The fish are mostly not there at that time of year. We are doing everything to mitigate the impacts upon fish…the fish biologists are predicting that fish will recolonize the river when the dams are removed.”

TOPICS:Removing dams on the Klamath River