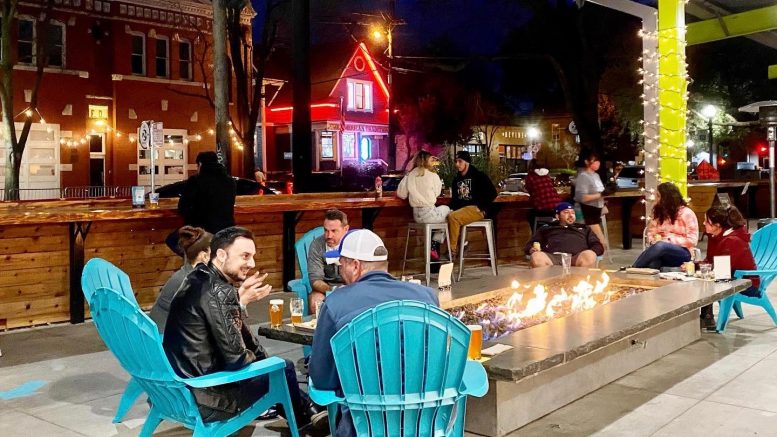 A crowd keeps warm outdoors during the winter at Golden Road Brewery in Midtown. Courtesy photo.

Holding glasses of beer that glint yellow and gold, some thirsty patrons huddle near a propane-heated lamp as a young man hesitates, studying the field before him. He smiles, whirls his arm and cautiously hurls the pouch in his hand into the air, hoping to make the full 27 feet distance to the cornhole board. A moment later, a fistful of resin pellets slap against the polished wood surface, confined in a cloth pouch.

As spectators gasp and groan, the sounds of their disappointment flow over the waist-high wooden fence of Golden Road Brewing and into the ears of walkers and drivers passing through Midtown.

One of five Golden Road brew pubs in California, Sacramento’s “Pub Midtown” opened in May 2018. Remodels at the location in 2019 and 2020 brought the addition of a permanent partial roof over the patio as well as cement floors. Those changes — along with adding a fire-pit table and propane patio heaters — allow the brewery to accommodate customers on nearly every day of the year. It’s also made Golden Road the central city’s unofficial haven for game brigades who like to play outdoors.

When the remodel was initially completed, the games on the patio were temporarily scrapped in favor of additional seating. Morgan Comber, who took over as the brewery’s general manager in August, re-established the gaming area. She said that the amenities at Golden Road have contributed to an uptick in return customers – and a gradual increase in business.

“Creating a nice, welcoming environment has helped,” Comber said. “A lot of people didn’t know that we were family and dog friendly. You can bring the family, play cornhole … We have a group of people that bring their own board games coming every week.”

She added that some customers regularly play Catan at the brewery, while others prefer to sit and enjoy a simple game of cards.

Recently, Comber noticed that one game-enthusiast who shows up all the time has been bringing a board game he invented.

“He comes in with his board game backpack and plays with a couple of his friends,” Comber noted excitedly. “It’s open style seating, so we allow you to gather any way that’s comfortable with you. It’s nice to be able to pull up a couple of tables on one end [of the brewery] if the other end is crowded.”

Tabitha Mooney, a fan of bars and breweries that encourage game-play on site, thinks Golden Road has created a welcoming, communal space for friends to meet up, enjoy a beer and a bite, then engage in cordial battle.

“We go there for the atmosphere and the beer,” Mooney exclaimed. “It brings everyone together and makes great memories. People are more likely to stay longer.”

In addition to its warm, open setting, Golden Road’s menu offers fare beyond standard bar food. While the ubiquitous pretzel and burger are there for the taking, Pub Midtown’s executive chef Albert Meza has curated a menu tailored to the beer flowing from its taps, while equally tending to the pallets of carnivores and vegans.

“Sacramento is huge on vegans,” Comber remarked. “We’re trying to listen to the community here and what [they’re] saying is, ‘We want vegan options.’”

Comber herself actually prefers the taste of Meza’s vegan burger. “I think it just tastes better,” she said. “Chef Albert does a good job at making sure that almost every menu item can be optioned as vegan. We have a vegan fryer, there’s a vegan spot on the grill. There’s a whole other vegan food prep station that we prepare on. We take it very seriously.”

Meza began with Golden Road when they opened their Grand Central Market location in Los Angeles in 2016. Now cheffing at the Sacramento location since its opening, he’s had fun bringing his own spin to the menu items. Under Meza’s influence, the avocado tacos, for example, receive a tangy upgrade in the way of pickled red onions.

“I love pickled onions – they add a pop of color, so it’s perfect for instagram,” Meza joked. “What’s not to love about pickled red onions?”

But Golden Road is a brewery, right? With 14 taps and a three-barrel brewing system on site, Pub Midtown’s Head Brewer Thomas Comber collaborates with Golden Road’s overall Brewmaster, Victor Novak, to source its malt, hops and yeast from near and far. That’s the strategy for conjuring flavors unique to Sacramento.

“We run the gamut,” Thomas Comber said from the tight confines of his brewing room. “What comes out of this brewery is pretty much on me. We’re getting a lot of our stuff from L.A., but anything that’s one-off is coming from this room.”

The pub’s management noticed that, if customers weren’t drinking IPA — shown to be popular in Sacramento — then fruit flavored beer like Golden Road’s Mango Cart came in as a solid second choice. Morgan Comber explained that, when they added Pineapple Cart, another fruit-based beer, they also served mimosas with guava juice. She said the positive success of the pairing led to the introduction of Guava Dia, a blonde ale infused with both guava and pineapple.

“We’re constantly tracking the beers to be sure customers like it,” she stressed. “We’re able to do more small batch experimental stuff that you can’t get somewhere else. [Golden Road Midtown is] something that offers a little bit of everything. It’s colorful and it brings the outside into the inside and vice versa. It’s a nice space where you can sit down and — no matter what your age is, what you like to eat, what you like to drink —we have you covered.”

Be the first to comment on "Sacramento’s Golden Road for game fanatics: The beer and vegan victories have you covered"