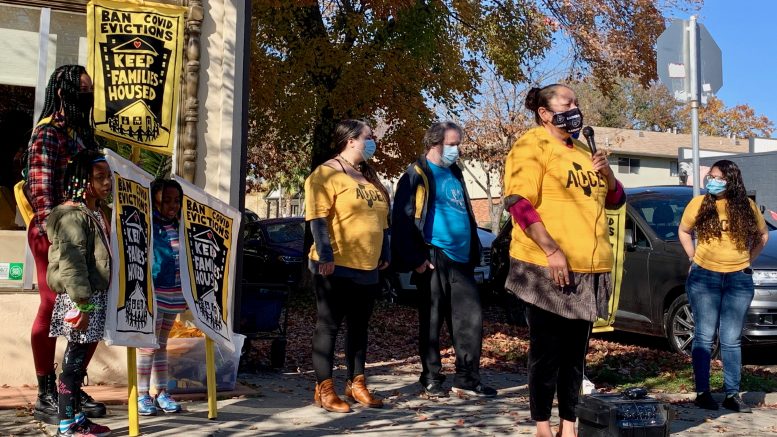 Eduviges Garcia, holding the microphone, tells the story of what led to her impending eviction. Photo by Scott Thomas Anderson

She was granted federal rental assistance, but a judge and her landlord don’t want to hear about that

It’s looking to be another hard holiday season on Sacramento’s eviction frontier.

Tenants spent last winter imploring state leaders to extend a moratorium that would protect thousands of locals who’d lost income from the pandemic from being forced out onto the streets. Their efforts worked for a time, but with those protections having been lifted – at the same time that federal rental assistance isn’t adequately being deployed – evidence has emerged that at least 3,000 Sacramentans are potentially facing homelessness.

That shadow was on housing advocates’ minds Monday morning as they gathered in Midtown to protest a refugee grandmother and her children and grandkids being locked out of their apartment on Thanksgiving Eve.

Eduviges Garcia says her problems started when she lost her job during the state-mandated lockdowns and got behind on rent. She says that she and her family ultimately ended up owing $9,250 in back-rent and utilities for their apartment on James Way. Garcia also claims that she had major problems with the property manager, Garcia Reality, fixing basic problems in the unit, including water drainage issues and a dangerous electrical problem that ended up shocking one of her daughters and causing her heart to temporarily stop as paramedics rushed to the scene.

Looking for help, Garcia reached out to the Alliance of Californians for Community Empowerment, or ACCE. The grassroots organization has been advocating for her since then. ACCE representatives told SN&R that Garica’s family has received a notice from the Sacramento Sheriff’s Department that they’ll be locked out of their home the day before Thanksgiving. According to ACCE, Garcia did apply for federal rental assistance in June. She did not find out until Nov. 19 that she’d been approved for the help. By then, it was too late: Garcia Reality had served her an eviction notice literally days after the eviction ban was lifted. Garcia did not yet have the assistance update when she was forced to appear in eviction court on Nov. 11.

“Despite Eduviges receiving an update from the SERA2 program on November 19th that her application had been approved, her landlord continues to refuse to allow her and her family to stay in their home,” ACCE representatives said in a statement.

Members of ACCE and Sacramento Tenants Union were on-hand Monday outside Garcia Reality as the grandmother shared her story.

“Her landlord had started harassing her and asking her for payment of the rent, and even went after her one time after she was buying groceries, and told her, ‘How come you can buy food to eat, but you cannot pay the rent,” said ACCE volunteer Monica Madrid, who was translating for Garcia. “Her grandson has a heart condition … He’s five-years-old and he’s actually going to have heart surgery tomorrow, and that’s one of the things that’s really scary about losing your house the next day.”

Madrid also stressed that Garcia was forced to go to eviction court without an attorney by her side.

“This is why it is really important for tenants to be able to have access to an attorney during an eviction trial,” Madrid observed. “We tried pushing that at a statewide level. Governor Newsom said he supported it; but there was no money in the budget … We’ve also asked the City Council. Councilmembers Eric Guerra and Katie Valenzuela are probably the only councilmembers who have vocally been in support of a right-to-council for tenants. A case like this could have easily had another outcome if she’d had an attorney fighting for her rights.”

Contacted by SN&R, Garcia Reality’s manager, Rosanna Garcia, said whether or not the grandmother gets federal assistance is not the issue.

“She’s not being evicted for rent, she’s being evicted for a lease violation in regards to having too many people occupying her unit, and damaging property,” the manager said. “And when we went to our unlawful detainer hearing, she presented all the things she told you, and a judge ruled that we were right and she was wrong.”

While Garcia’s story has some particularly Dickensian notes for the holidays, she and her family aren’t the only ones who could be out in the cold: Last week, La Shelle Dozier, Executive Director of the Sacramento Housing and Redevelopment Agency, told the city’s Law and Legislative Committee that, since Sept. 30, at least 3,000 eviction notices have been issued to local tenants.

Standing next to Garcia in Midtown, ACCE member Christen Lopez talked about how this story was emblematic of a much greater problem.

“We had a housing crisis even before the pandemic, the rent was already too high – people were struggling to pay that rent,” Lopez emphasized. “And then they lost their jobs. So, now, they either can’t pay their rent at all, or the jobs that they did get to supplement the jobs they lost, don’t pay enough to cover that stupid amount of high rent that they’re already paying. People do not need to be homeless because of the pandemic – they don’t need to be homeless at all.”

1 Comment on "Refugee grandmother, whose family faces health emergency, gets evicted on the eve of Thanksgiving"