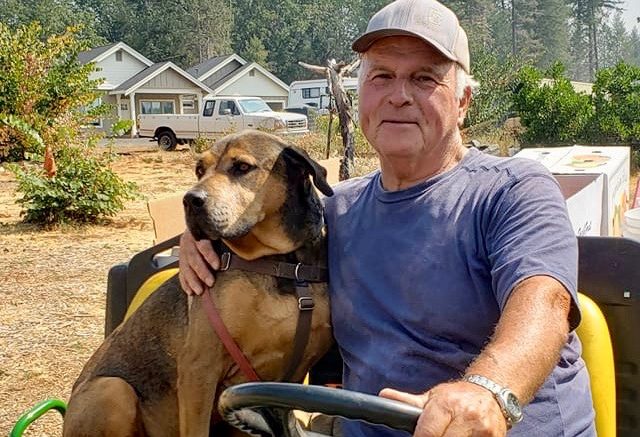 When the Camp Fire raged through Paradise on Nov. 8, 2018, Jim and Laurie Noble barely escaped with their lives. Almost everything they left behind, including three homes and eight outbuildings that composed the infrastructure of their business, Noble Orchards, went up in flames. However, the heart of their operation—the apple and stone-fruit orchards—miraculously survived.

Insurance enabled the couple to rebuild their house, but there wasn’t enough to rebuild any of the remaining buildings needed for the farm to properly function. Three years on, and at the end of this year’s apple harvest, survival remains a struggle complicated by the slow pace of promised payouts from the Fire Victims Trust, a $13.5 billion PG&E-funded account set up for those who’ve suffered loss due to fires that company is responsible for starting. (For more on survivor struggles, see “Everybody needs more time.”)

“We have a business that’s ripe and ready to go, literally,” Laurie said last Thursday (Oct. 28), “but we lack facilities and they’re not yet funded. We understand it’s an extremely complex situation, so we’re doing what we can. But we wish things would move a little faster.”

Recovery has been impacted by another disaster—COVID-19. Not only has business been drastically reduced during the pandemic, as it has for many, but recent efforts to uphold safety protocols while salvaging what they can of the harvest have been met with blowback from their community.

The Nobles told their story while sitting on a flat piece of land overlooking the orchards that was once occupied by their cold storage unit, which was a repurposed packing shed built by Jim’s grandfather in the 1930s. The lack of that particular building is the root of their most pressing current challenge: The picking season for most of the more-than-one-dozen varieties of apples grown on the land has already passed. Only Granny Smiths remain in abundance, and it’s a matter of weeks, or days, before they, too, will overripen and drop to the ground.

“Normally, when we pick Galas in August, we’ll still have some for sale in December,” Laurie said. “But because of the cold-storage situation, everything on the trees needs to be picked, and everything picked needs to be sold.”

Laurie explained that they had a plan for a cold-storage unit in hand within weeks of the fire, but that rebuilding is not only dependent on the funding that’s been delayed but also a complete plotting of everything that needs to be rebuilt.

“That all ties into M-O-N-E-Y, which is a huge unknown,” she said. “We have to decide what we can afford to rebuild and how the business will continue without spending every penny we have.”

“Especially at our age,” Jim interjected, noting he is past 70 and Laurie is in her 60s.

Steve “Woody” Culleton, a longtime member of the Paradise Town Council, said a lot of Camp Fire victims, including others struggling to keep their businesses alive, are in the same boat. He explained how PG&E’s contribution to survivors is half in cash and half in the company’s stock, which has plummeted at least $2 billion since the agreement was made. The vast majority of local victims are still waiting on funds. A total of $3.6 billion in determinations have been made thus far with only $1.1 billion actually paid out, according the trust’s official website.

“It’s a joke,” Culleton said. “The people administrating the trust have made far more money than has actually been distributed.” Culleton said larger entities such as the town of Paradise, Adventist Health (owner of Feather River Hospital), AT&T and others already received huge chunks of money through lawsuits and other reparations, while citizens and small businesses are left in need.

The Nobles expect it may be up to two years before they can break ground on cold storage and other essential infrastructure, and even that will require making tough decisions to ultimately rebuild only some of what was lost.

In the meantime, the Nobles have taken measures to ensure the crop isn’t entirely wasted. For one, they began selling at Chico’s Saturday Farmers’ Market in early October for the first time since the Camp Fire.

“People there have been really supportive and appreciative that we’re back there,” Laurie said.

The Nobles also instituted a “U-Pick” program, inviting people to come to their orchard to pick apples for $1 a pound. They’re requiring visitors to show proof of vaccination and wear masks, causing detractors to lambast them on social media.

“The COVID thing has really stopped a lot of people and irritated some,” Laurie said.

“But it’s our choice, and we’ve already been through enough disaster with what you see here … and don’t see here,” she continued, indicating the damaged farm. “The thought of him or I not being here is unbearable, and then the business wouldn’t exist at all.”

Jim noted there are also liability issues if someone is infected while picking apples. “We’d just as soon avoid all that. If some people aren’t happy and want to call us names that’s their problem.”

“We’ve also had a lot of people call and come out who appreciate the rules,” Laurie said. “They like that they can come out to a place they know they’ll be safe. We’ve had people come bring everyone from the kids to the great-grandparents, four generations picking apples together.”

Culleton called the actions of those who’ve criticized the Nobles over their COVID rules “unconscionable.” He lamented how everything has become so divisive and politicized—even picking apples—in the post-Trump era.

“The Nobles are a cornerstone of our community; they’re our neighbors and need support,” he said. “Their orchards are also part of the history of Paradise … after gold mining, there was logging, and when Paradise was cleared, people planted apple orchards. They used to be everywhere here, and now that’s the last working orchard here.”

Indeed, the Nobles would be marking the centennial of the family business this year but passed on holding any celebrations due to COVID uncertainty and the lack of infrastructure at the farm.

Rains have cut into the Noble’s U-Pick efforts, and the recent heavy storm knocked down a few trees that Jim had to push back up, but Laurie said that the needed precipitation is the best possible disruption. The Nobles couldn’t predict a date they’ll end U-Picking, as there’s no way to tell exactly when the apples will no longer be good, but said it’s a matter of weeks at best.

Even if the apples don’t sell, the Nobles said they hate to see them go to waste. They’ve already donated 700 pounds of apples to Dixie Fire relief efforts and said they’re happy to consider donating to other organizations aimed at fire or hunger relief. That is, as long as organizations can pick the crop themselves.

“If someone can organize 20 or so people to come clear the apples and deliver them to Plumas County or wherever they’re needed, that would be great,” Laurie said. “It just makes sense that if we have a surplus of food nobody is using, then let’s get it to them.”