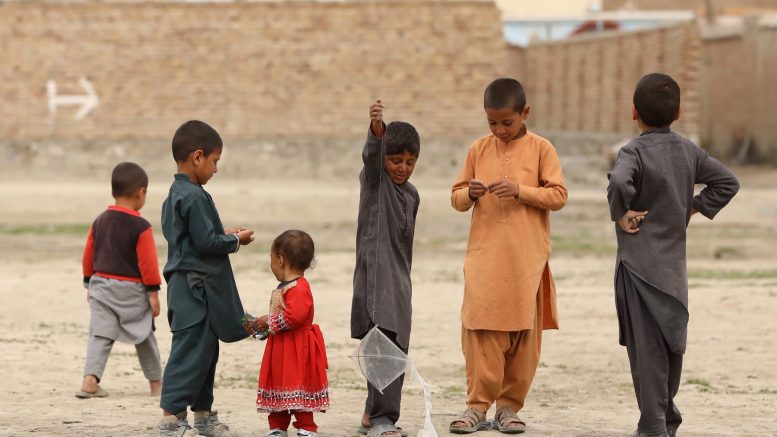 Children playing in the streets of Kabul in October of 2020, months before many were forced to evacuate to Sacramento. Photograph by Sohaib Ghyasi

The fall of Afghanistan’s US-backed government has resulted in tens of thousands of refugees looking for new homes. Many of them have found a safe haven in Sacramento.

In August, the Afghanistan government collapsed at an unpredictably fast rate two decades after the United States invaded in response to the 9/11 terrorist attacks. The Taliban regime, which the United States defeated in 2001, is now back in power. Former President Donald Trump signed a deal with the Taliban in February 2020 promising a U.S. military withdrawal. President Joe Biden followed through and oversaw that withdrawal, which concluded dramatically this summer.

Afghans who were able to evacuate are now being resettled throughout the United States. Hundreds are coming to the Sacramento region, joining a large Afghan community already here.

As of 2019, one-out-of-nine Afghans living in the U.S were based around California’s Capital City, according to census figures. There were approximately 9,700 Afghans residing in Sacramento County alone, more than any other county in the nation. There were also an additional 2,000 Afghan natives living across Yolo, Sutter, Placer, or El Dorado counties.

Afghans refugees are centered in the Arden-Arcade area of Sacramento region. There were roughly 4,200 of them there as of two years ago.

“First off, it is because of the weather; second, it is cheap; the third [reason] is it is a larger community and it feels like home,” Khuram said. “You can find all types of Afghan food, groceries, shops, tourist businesses here”.

Khuram also noted the large enclave that is already here, and how many more Afghan families will be joining them soon.

Lisa Welze, Director of the Sacramento office of the International Rescue Committee, said that the area remains an affordable place to resettle Afghan refugees relative to other parts of California.

“In Sacramento, we’ve been resettling larger numbers because there’s already a community in California,” Welze explained.  “The community began in the Fremont area, in the Bay Area, and then as the cost of living increased and over time, Afghans began moving to Sacramento.”

But, even though Sacramento is considered cheap compared to other cities throughout California, the rising cost of living has posed a challenge to helping refugees, according to Welze.

“The Sacramento region has reduced the number of folks it’s going to help because of housing,” she acknowledged. “We’re primarily resettling people who already have relatives here. And in those cases, their relatives are helping them to find apartments, but certainly it’s a challenge.”

Vickee Moy, director and founder of the Starting Point Organization, said her group has been focused on giving aid to Afghani children arriving in Sacramento.

“With any immigrant or refugee group, past or present, they usually want to go to a place where there is an established community,” Moy agreed. “Whether it be supermarkets that are owned by their people or places of worship.”

Moy has been particularly inspired by Afghan students in her English as a Second Language class at Sacramento City College. She says she’s been heavily impacted by the stories of their lives.

Local nonprofits have made a huge difference since the recent fall of Kabul. Usama Khalil, founder and president of Refugees Enrichment and Development Association, said IRC helped resettle 800 individual refugees in Sacramento County during the month of October alone.

Welze estimates the number of refugees will continue to grow, adding another 100 to 200 families over the course of the next six to twelve months.

As more Afghan refugees continue to come to Sacramento, the county will have to use more resources to help them to succeed. The Board of Supervisors voted in September to alter the budget and provide another $5 million for Afghan refugee costs. The county is still ironing out the details on the best way to use the funds.

“We’re tracking the state and federal funding being made available,” Kim Nava, Sacramento County Pu​​blic Information Officer, said via email. “We have the $5M to cover costs as needed that aren’t covered by them. Once we get a handle on that, we can better assess how to use those funds and have more specificity about how the money will be spent.”

Even with more money allocated for Afghan refugee costs, they still face problems. Over 6,000 Afghans in the Sacramento region live in poverty. As a group, households headed by Afghani natives have a median income of around $28,000, according to U.S. Census data. About 50% of Afghan natives live in poverty, compared to 12% of the Sacramento region.

Not only do Afghans face financial hardship, but they are also dealing with their trauma. Khalil explains that when individuals and families arrive in Sacramento, they often come with a severely battered state of mind. He describes these people as fleeing war and violence, their mental status fragile. Add to that coming to an unfamiliar country while speaking little to no English, the stress just mounts.

Nationally, About 50% of Afghans aged five and above claimed inadequate English ability, compared to 46 percent of other immigrants in 2019. In addition, only 6% of Afghans spoke solely English at home, according to the Migration Policy Institute, a nonpartisan organization dedicated to improving immigration and integration policies.

Overall, Afghans are the latest group of refugees to find solace in Sacramento. Earlier, it was refugees from the former Soviet Union. Before that, it was Hmong refugees from Vietnam, Laos and Cambodia.

“During different world crises, we’ll see an increase of refugees from different countries, and then they assimilate and start a new life here,” Welze observed. “And then, we’ll see a new group a decade later. Sacramento is no different from other cities. It’s just that right now, because of the crisis in Afghanistan, we’re going to see more Afghans for six months. And then, who knows? In a year, it’s going to be a different group.”