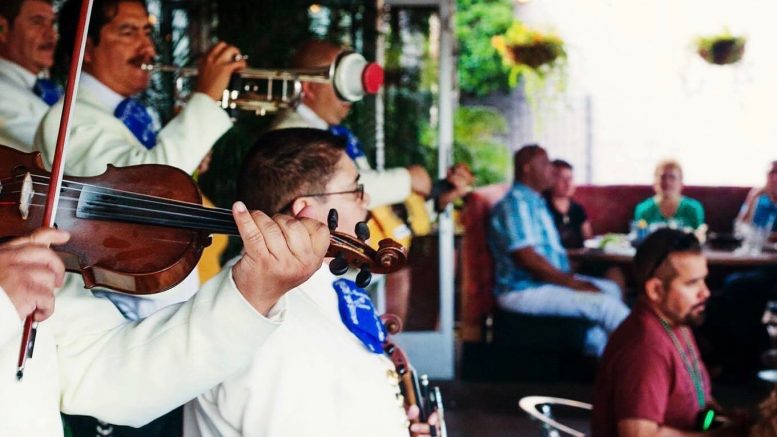 By TJ Martinez and Giana Seltzer

A wide array of restaurants, neighborhood events and high-quality schools have helped make a section of South Land Park the most ethnically diverse place in the Sacramento region.

Pick two people at random from this part of South Land Park and there is a 79% chance they will identify with a different ethnic or racial group.

South Land Park is immersed in culture and filled with people from different backgrounds. Anthony Jackson, vice president of the South Land Park Neighborhood Association and long-time resident, said that he’s noticed recent changes compared to when he lived there as a child.

“I’ve actually seen it over the years become very diverse,” Jackson observed. “You know, growing up on the hills, it was not so diverse; but now, if you drive past the neighborhood, you see everybody’s difference.”

According to census data compiled by Statistical Atlas, the median age of South Land Park residents is between 40 to 50-years-old; but Jackson explained that there is a vast range of ages in the neighborhood. The homeowners’ ages begin with young adults in their mid-20s, expanding to elderly residents.

“The youngest I believe is 27 and the oldest is in their nineties and [everyone else] is everywhere in between,” Jackson said.

The median household income in South Land Park for residents was around $67,000-a-year during the middle of the last decade, and data shows the majority of residents worked in administrative, management or sales related positions.

As for the neighborhood experience, the South Land Park Neighborhood Association organizes annual get-togethers for its 13,000 residents to celebrate the neighborhood and its diversity. Jackson said he’s looking to implement more activities for residents because there is always a good turnout.

“When we host an event, or when there is an event in the community, everybody comes together and has a great time, whether it’s a food truck event sponsored by the Council office, or if it’s a National Night Out sponsored by SLPNA,” Jackson said.

The neighborhood has become more popular as people move in from different states and countries, but there are also families that have resided in South Land Park for decades.

“You have individuals who are the original homeowners who live here, you have families that moved in 10-years ago and you have somebody like myself, who moved in two years ago,” noted South Land Park Neighborhood Association President Michelle Reyes. “So, I would say that it’s a wide range.”

Although Reyes is president of the Neighborhood Association, she is a newer resident and she explained that South Land Park’s patchwork of people and rich history is what attracted her to the area.

“A lot of businesses are minority-owned and women-owned, and they’ve been here for quite a long time,” Reyes said. “I would biasly say that we have a lot of diverse pride within our neighborhood. We’ve seen our restaurant industry really have a hold to attract people. Our neighborhood is a place where you can get dim sum in the morning, and great Mexican restaurant food in the afternoon.”

Carmen Medina, a server at Florez Bar & Grill, has lived and worked in the neighborhood for nearly three decades after emigrating from Mexico.

“When I came here, I didn’t even know how to say ‘spoon,’” Medina recalled. “So, I learned with the people, I’ve never been to school for any English classes. That’s why I love my people, I love everybody, Spanish, black people, white people, Japanese, Chinese – I love it.”

“You see a lot of different races, you see you know Asian people, white people, Mexican people, black people. It’s just normal, we’re just used to it.” Vinluan stressed. “What someone pointed out, they were like, ‘You realize if you go somewhere out of state, out of the city, it’s going to be a lot of one[race].’  But you come here, and it’s normal to you.”

Vinluan also acknowledged that no matter where life takes him, South Land Park will always be considered home.

“I always wanted to move away, like live in another city or another town, another country maybe,” he acknowledged. “But I’d say my ultimate goal is coming back here and retiring here, [just] getting old and living out here. It’s a cool place.”

Sergio Barrios, owner of Barrio Cafe, nestled at 1188 35th Ave., pointed out that the uniqueness of the community goes beyond ethnicity.

“We do get [it] not only in the ethnic spectrum but also in the political spectrum,” Barrios mentioned. “I’ve had people who’ve had meetings about recalling the governor even though I’m against recalling him.”

Be the first to comment on "A patchwork in profile: Census shows South Land Park is the Capital City’s most diverse neighborhood"