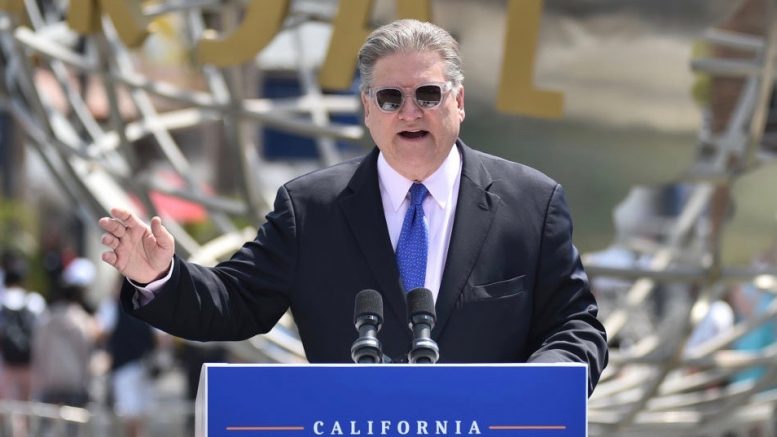 Sen. Bob Hertzberg declined to vote on bills that would have enshrined new regulations in the law.

Elected officials, scientists and others from around the world gathered in Scotland for the COP26 climate summit, the annual event hosted by the United Nations to find common ground on reducing greenhouse gas emissions, but they’re facing a stark reality: Emissions have risen 60% globally since the first COP in 1995, and past failures to confront the climate crisis have become increasingly obvious and unavoidable.

Among the thousands of attendees are 15 state legislators from California, all Democrats. Their purpose for going, according to one legislator attending, state Sen. Josh Becker (D-San Mateo County), was to leave the conference with a “shared sense of momentum and a shared sense of ideas.”

Capital & Main examined the voting records of the California delegates on 23 different bills in the most recent legislative session, all of which proposed regulations on the oil and gas industry or measures that advance climate preparedness and environmental justice. Nearly all of the bills were opposed by the state’s powerful oil and gas industry.

For the most part, the legislators supported every piece of legislation, whether in a legislative committee hearing or a floor vote in either the Assembly or Senate. But one legislator’s abstentions on key bills stood out.

In public statements, Hertzberg has affirmed the need to address climate change. He declared that he was attending COP26 “with an eye toward innovation and entrepreneurship that will drive our state’s economy for generations to come.”

He supported a dozen climate bills this year, but three bills that he failed to support were among the most significant pieces of environmental legislation this past session. Hertzberg defended his climate bona fides in an email to Capital & Main and called attention to his support for the state’s budget, which allots billions for electric vehicles, drought management and wildfire relief and prevention.

In April, Hertzberg rankled environmentalists after a meeting of the Senate’s Natural Resources and Water Committee, when he declined to vote on SB 467, a bill that proposed to phase out extreme oil and gas drilling techniques and enact regulations limiting where companies could extract fossil fuels. His abstention, along with an abstention from Sen. Ben Hueso (D-Imperial Valley) and a no from two Republicans and Sen. Susan Eggman (D-San Joaquin), killed the bill.

The bill would likely have had a direct impact on the health of Hertzberg’s constituents. His district encompasses or sits near three oil fields, including the Placerita oil field, the Cascade oil field, and the Aliso Canyon oil field, which collectively produced almost 600,000 barrels of oil in 2020.

Earlier this year, Gov. Gavin Newsom’s administration announced a phase-out of fracking by 2024, and in October proposed a rule instituting 3,200 feet of space between new oil wells and homes, schools and other sensitive spaces. But SB 467 would have made it the law. A future governor could undo it via executive order.

In a statement sent by email, Hertzberg said, “I’m pleased to see the Governor’s recent action prohibiting new oil wells in our neighborhoods. This action relies on science and is faster, more aggressive and more effective than the legislation we were considering earlier in the year.”

The oil and gas industry spent millions of lobbying dollars this past year and targeted both SB 467 and SB 342, a bill that would have expanded the board of the Los Angeles-based South Coast Air Quality Management District to include environmental justice advocates. Hertzberg also abstained from voting on SB 342, this time as a member of the Senate Governance and Finance Committee. The bill, which could have directly impacted the air quality of his constituents, was pulled shortly thereafter.

Hertzberg touts his time working as a “clean energy entrepreneur” in between stints in the Legislature and has not received significant campaign contributions from the oil and gas industry in recent years. He has, however, taken a total of $88,000 from trade unions and their PACs since 2019. The oil and gas industry and the State Building Trades Council formed an alliance to sink both SB 467 and SB 342, as previously reported by Capital & Main. At legislative hearings, union members voiced concerns that regulations would eliminate well-paying oil and gas jobs.

Additionally, Hertzberg has so far taken $2,000 from railway company BNSF, a subsidiary of Berkshire Hathaway, this year. According to Berkshire Hathaway’s annual report, its holdings include 1,400 miles of natural gas pipelines extending from Wyoming to California; a majority of its electricity generating assets nationwide are in natural gas and coal, based on total megawatts.

The senate majority leader was also one of many Democratic senators who failed to approve AB 1395, which would have made it a legal obligation for the state to reach net zero greenhouse gas emissions by 2045. Once again, the bill was heavily opposed by both the industry and the Building Trades Council. As Capital & Main reported, the legislation also included a framework for carbon capture and renewal, a technology favored by the oil and gas industry — but it lobbied against the bill because of proposed stricter standards on cutting emissions.

Explaining his opposition, Hertzberg said by email that he thought the bill delegated too much authority to the California Air Resources Board, which currently oversees the state’s emissions reductions goals primarily through a cap-and-trade program.

Technically, the state is already committed to net zero by 2045 — but only through a 2018 executive order from then Gov. Jerry Brown. A future governor could rescind the emissions goal.

Hertzberg’s son, Daniel Hertzberg, is currently campaigning to replace him; the elder Hertzberg has publicly supported his son’s campaign.