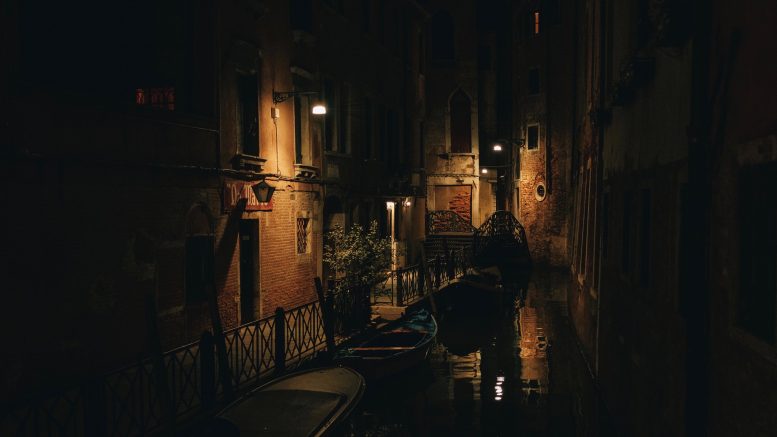 You can glean a lot from a culture by how it remembers its dead.

In our corner of California, most ghost stories involve unlucky prospectors, victims of frontier justice and thousands of lives swallowed by the cholera epidemics that shadowed the valley’s hardest days. Traces of these lost voices are thought to be drifting in our oldest saloons, our time-worn hotels, our lonely, rain-beaten cemeteries. The ghost stories of the American West are usually about tragic remembrance, and Memento Mori – that reminder of our own inevitable date with the end.

But that’s not the case in other parts of the world. I came to understand this a few years ago in Italy, mainly while taking a nighttime ghost tour of Venice.

Venice after sundown is the perfect place to chase macabre memories: It’s a jagged stone-scape of candle-cluttered windows and torches flickering over ancient waterways – its scenes casting a spell like no other corner of the Old World.

Our group’s guide, Giandrea, was a native Venetian. She eagerly ushered away us from the crowds at Rialto Square and ducked down a crumbling corridor that led to footbridges draping silent, shadowed canals. She paused at Santa Maria Gloriosa dei Frari, a 13th-century church of sandy stone with bone-marble spires cutting into the fog. It was at this very square in the 1500s that a nearby mansion caught fire over a canal. The mansion’s owner ran outside, screaming that his 7-year-old daughter was trapped in the blaze. As the story goes, a crafty merchant of Venice assured the father that he would rescue his child. However, after the merchant made his seemingly heroic entrance into the chaos, he abandoned all effort to look for the girl and began filling his robe with silver and gold finery. As smoldering sections of the ceiling collapsed, the merchant jumped out a window into the canal, where he immediately sank to the bottom and drowned. Ironically, he was over-weighed by his plunder of stolen treasures.

“If you are in this square at midnight,” Giandrea warned us, “the merchant will appear to you, walking in flames.” Her voice softened for a moment. “He will ask you to take him inside the church and pray for his soul. It is said that if someone will take him into the church and pray for his soul, he will cease to be on fire, and finally find peace.”

Giandrea moved her eyes across us: “But if you see him, don’t pray for him!” she suddenly thundered. “He let that poor little child die in the fire! He doesn’t deserve your help! Let him burn! Let him burn!”

It took a few moments for that admonishment to set in while Giandrea was leading us to the next stop.  That was the Basilica di San Giovanni e Paolo, an eerie crimson edifice towering over the sky-blackened lagoon waves. This is the site where Marino Faliero, the 55th Doge of Venice, is buried in an unmarked stone sarcophagus. In the old Venetian Republic, a doge was a religiously anointed emperor. In 1355, Faliero, acting as Doge, secretly tried to betray Venice to its rival enemies. He very nearly cost the floating city its independence. He was promptly beheaded in Saint Mark’s Square. Our guide informed us that, as punishment, the traitorous doge had been buried with his head between his legs.

“If you come near his tomb late at night, you will see Faliero’s headless body wandering,” Giandrea observed. “His disembodied voice begs for strangers to tell him where to find his skull, which is the only thing that can bring him rest.”

She took a reverent pause as we contemplated this. Then Giandrea blurted, “But for God’s sake, if you see him, don’t tell him where the head is! He disgraced our city for centuries! He doesn’t deserve your help! Let him wander! Let him wander!”

The last stop involved a similar story about a Byzantine salt trader who’d been turned into marble because he was cheating widows out of money. The trader’s tale ended with another emphatic command from Giandrea to not lend assistance to the suffering spirit.

I realized that Venetians take a certain pride in the perpetual punishments inflicted on their ghosts – and they never let a lapse of sympathy on their own part ruin some exquisite cycles of torture. In California, we’re sure that our wandering dead are failed dreamers; in Venice, they’re worried that theirs are escaping schemers. Perhaps it’s the difference between a non-indigenous culture that’s only existed for 172 years and a water-bound fortress city that has endured for fifteen hundred. As bad as things can seem in California sometimes, the empathy embedded deep in our ghost stories suggest that we’re still very much in our dreaming phase.