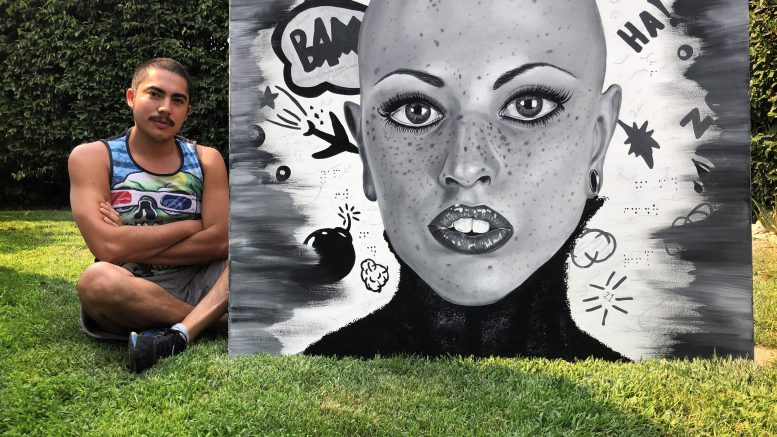 A shimmering mauve ribbon with gold lettering clings to an image of red, yellow and blue fish pursuing each other in a spiraled dance. Titled “Koi Fun,” it’s the watercolor that landed El Dorado Hills painter Jo Ella Allen the “Best of Show” award at her county fair this year. Now, Allen is one of 225 artists, crafters and makers that will be showcasing their creations at the 24th annual Sacramento Arts Festival.

The event that runs between Nov. 5 and 7 is making its return, in a sense, to the newly renovated SAFE Convention Center in downtown Sacramento. Other than the time it took to complete that construction — which was wrapped in June — the former Sacramento Convention Center has been home to the arts festival since 1998. Last year’s gathering was set to be held at Cal Expo, but was eventually converted to a virtual exhibition. This year, organizers are forging ahead with in-person action.

Festival producer Warren Cook plans to welcome 10% fewer vendors than he normally would. Cook predicts that some art fans may hesitate to attend, given the necessity to show proof of vaccination or a negative COVID-19 test.

“I think our crowd might be a little less, because of COVID,” Cook acknowledged. “Having to wear a mask too — that’s going to hold some people back.”

Recruiting restaurants for this year’s festival has also come with difficulty. At least two of the food vendors that have been part of the festivities for 20 years aren’t in business any longer – or aren’t equipped to handle service at an event of this size now.

“I called several places I know, and they don’t have the help,” Cook said of the labor shortage. “The vendors coming have to rent equipment.”

This year’s live music has been scaled-down, too. Instead of a large band, there will be several solo acts, including Dirk K, Bob Culbertson and Davis-musician Gabe Lewin.

“Cutting back on so many things,” Cook reflected. “We didn’t have the budget to spend on bigger bands.”

But the adjustments haven’t dampened enthusiasm. Like last year’s virtual festival, the 2021 Sacramento Arts Festival is promoting an online market through the end of the year. According to Cook, artists from all over the country take part in the opportunity.

“At least half of them are our regular vendors, and there’s lots of people from all over the country who decided to join too,” he explained. “We’re going to have a special Sacramento Arts Festival online market, December 3rd though 5th, of artists who sign up specifically for that.”

The festival also has an international flavor, since some of its artists immigrated to the U.S. from places as diverse as Afghanistan, Thailand, Canada and Vietnam. Junnior Navarro is such an artist. A native of Mexico who immigrated to Sacramento three years ago, he’ll be showing his oil and mixed media paintings for the first time this year. Navarro said he’s excited because, though he’s sold his art at a handful of local galleries, he considers the festival a stage for showing his art to a wider audience.

“This is just the beginning of what I want to do in the U.S.,” Navarro told SN&R, beaming. “Sometimes I use color as a background or just to represent something in my painting. I like getting ideas from my life to create, but interpreted in different ways.”

He added that he’s drawn to themes of femininity and extravagance because they’re a part of his experience, which often leads to the creation of small birds and grayscale feminine figures conjured from his own imagination.

“I was born in a small town in the middle of the desert and I watched all kinds of birds,” Navarro remembered. “Most of the birds I paint are hummingbirds … the only birds that can fly backwards and upside down. This is basically my art.”

From Cook’s perspective, the festival’s wide-ranging artist pool doesn’t take away from its focus on Sacramento-area talent.

“Those are the folks who have been to our shows for years and years,” he noted. “Some of these people have been a part of our festival since the beginning.”

Veterans of the event include Jay Gordin and Katie Wolff, who share a home in Grass Valley. Gordin’s hand-made knives — which he forges himself in his workshop — and Wolff’s vibrant paintings, will all make their fifth appearance at the festival next weekend. Wolff joked that she’s the “color behind the man,” though Gordin added that she is much better at art than she gives herself credit for.

“When we have a show, Jay gets the table and I get the walls,” Wolff explained with a laugh. “Think how drab his table would look with just knives.”

Gordin, who was an antiques dealer for over 40 years, said he started making knives in his 20s.

“I’ve always had a passion for knives,” he admitted. “I became serious about 40 years ago.”

Gordin added that he wants to make an attractive, functional tool that will last “for generations.”

When it comes to Wolff’s paintings, a yellow-orange shade she calls “bright butterscotch” appears quite often. She said the color has taken over all of her abstract work.

“It really snuck up on me – it takes my breath away,” she remarked. “I’m a portrait artist. Two legged and four legged, but I’ve painted sunflowers like crazy because they have my favorite color in it.”

With artists like Wolff, Gordin, Allen and Navarro in the mix – and countless others – the energy around this year’s festival is building. Cook’s office and mobile phones haven’t stopped ringing and there’s a waitlist to rent a booth. But, despite seeing a lot of names and faces that he recognizes from past years, Cook has noticed some regulars are still holding back due to COVID-19.

“People are ready to start showing again, but there are some who have dropped out or haven’t signed up or they’re waiting until next year,” he said. “There’s a number of those, but not a huge amount. We have painters and sculptors and jewelers and, for the most part, they’re all fantastic. I think we have one of the best shows we’ve ever had as far as the quality of the art … Most of these are my friends from over the years so I’m just excited to see them return. It’s been a couple of years! It’s been a long time.”