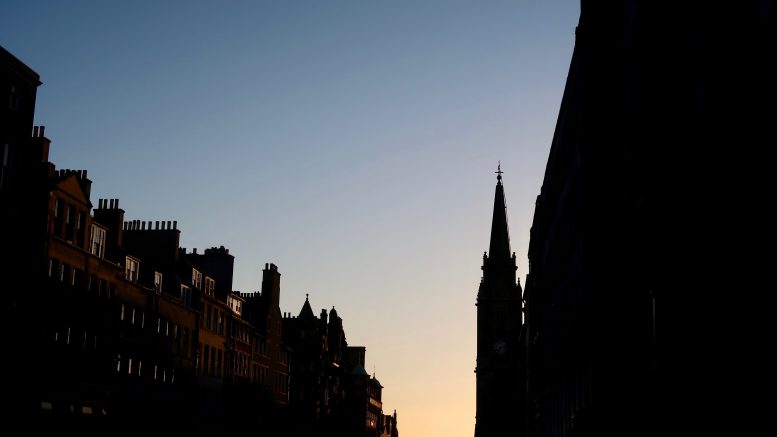 The Scottish city of Edinburgh at sundown. Photograph by Scott Thomas Anderson

Old Town Edinburgh was once known as the murky fishbone, a medieval fossil spine that descends in a deformed slope from its castle-head to the courts and alleys fanning from its vertebrae like barbed ribs. Within this maze of bronze bricks and damp cobblestone stalked the men who once brought western culture its most haunting memories. It’s been said that the Scots “invented the modern world,” but Edinburgh’s Victorians understood that the city’s afterglow of zealotry, vice, scheming and double-lives had balanced the Scottish Enlightenment with a dark legacy of the imagination.

Today, Edinburgh offers more than just a chance to walk in the footsteps of philosophers and folk heroes: It allows for sneaking down dimly twisted wynds that led some men to a marauding madness – that uncertainty that atomized the Gothic mindset and scattered the Scots’ influence from Britain’s greatest novels to the next century’s most popular films.

Evening on a dark town

To venture into Scotland’s capital during Fringe Fest means pushing through leather-clad sword swallowers, glittering, half-naked mimes and mohawked lads in kilts blowing fire from bagpipes. It’s a spectacle that gives little hint to the theocracy that once ruled Edinburgh with an iron noose. In 1696, the city fathers sent a 19-year-old college student to the gallows just for “ridiculing” their Presbyterian faith. Yet few decades later, the same sludge-spattered streets were alive with the radical views of deists, social scientists and revolutionary intellectuals taking over Edinburgh’s soul.

But the old ways still live under the surface. Walking up from the place of the teen’s execution, visitors turn north on Cockburn Street to find a tunnel of grey brick and flagstone-steps that starts sinking under the ebony lamps above. The passageway is known as Fleshmarket Close. It was here, amidst slum-bound taverns, butcher shops and prostitute corners, that William Deacon Brodie began the carousing double-life that would inspire one of fiction’s most memorable characters. Brodie was a wealthy, high-born trade councilor and member of Edinburgh’s local government. In 1787, Scotland’s capitol was shocked to learn that, by day, he had been a respectable religious socialite; but, by night, he’d been a flighty hobgoblin of pure indulgence. His escapades included running cock fighting rings, cheating gamblers with loaded dice and commanding a gang of black-suited burglars who tromped through the shadows with pistols, masks and lanterns. Two generations after Brodie was hung for treason, an obsession with his dual-existence led fellow Scotsman Robert Louis Stevenson to write “The Strange Case of Dr. Jekyll and Mr. Hyde.”

The grim trickster’s impact doesn’t end there. For generations his specter has been spotted wandering through Brodie’s Close, his hand gipping a rusty set of keys, his cloak flanked by a sable, fire-breathing horse. It’s known that Brodie tried to escape his prison cell in life. It’s thought that he’s still trying to escape in death.

One center of nightlife in Edinburgh is Deacon Brodie’s Tavern. After sunset, its exterior has all of the timeless touches of a lowland pub, while the bar inside is a lamp-washed cavern of gold leaf, ebony oak and frothy ale glasses clanking by obfuscated mirrors. The pub’s menu is hailed for its wild boar and Chorizo burgers, along with its hard ciders and venison-and-port pot pies. Beer-guzzlers can give a nod to old Deacon Brodie himself by sipping a pint of Siren Liquid Mistress.

Strolling south from Brodie’s Tavern under the stars leads to the Greyfriars Kirkyard. In the 18th century, these slanting graves marked the first depository of the dead to be targeted by “the resurrectionists” – a biblically inverted name for the city’s craven, relentless grave robbers. The rise of Edinburgh’s universities and medical colleges –and its hailed professors of human anatomy –was being viewed as a beacon of scientific progress. Yet it also coincided with the city’s cemeteries getting desecrated by a ghoulish group of paupers known as resurrectionists. They were men who would dig up freshly buried corpses to sell to the nearby operatories and dissection labs. Now, heading down Candlemaker Row along Greyfriars’ timeworn tombstones, drifters come to Cowgatehead and the faded Old Town grandeur of Grassmarket Square. It’s the mouth of a neighborhood where, in 1828, two men involved in “resurrectionism” became all-out serial killers.

It’s remembered as the case of William Burke and William Hare. They were a gruesome duo, the ragtag shoe cobbler and the boarding house keeper who together murdered the city’s indigents, prostitutes and disabled outcasts before selling their mortal coils to Edinburgh’s most-renowned professor. Decades later, Burke and Hare had such a hold on Robert Louis Stevenson’s dreams that he channeled their 16 victims into his masterful short story “The Body Snatcher.” Hollywood’s golden age of horror elevated Stevenson’s tale to new heights in 1945, with a gaunt, hollow-eyed Boris Karloff bringing Edinburgh’s resurrectionists to life in his most chilling moment of silver-screen brilliance.

Burke and Hare are gone, but Grassmarket Square still hints at their world, especially at night when the lamp orbs throw rays along the rust-weathered bricks and coral turrets looming over pubs like The Black Bull, The Last Drop and the White Hart Inn. One of the buildings, the White Hart, is said to be the tavern where Burke and Hare drank in the evenings before their nocturnal hunts. Legend has it that they once lured a lady of the night away from its bar, strangling her somewhere in the nearby shadows. A few doors up, The Last Drop Pub – with its dangling noose insignia – claims to stand where the last person was forced onto the gallows in Grassmarket Square. Despite countless reports that The Last Drop and The White Hart are both haunted, on most evenings after sundown these pubs are humming with life, the crowds shouldering in as the ghost-white face of Edinburgh Castle lifts out of the blackness above them.

A land of wood witches and sinister ferries

Scotland’s national poet Robert Burns famously wrote “My heart’s in the Highlands,” immortalizing his love of damp valleys, wild-hanging woods and lonely stags charging through the meadows of upper Scotland. But Burns also found more salacious folktales to write about in these remote vales and glens, particularly in his epic witch poem, “Tam o’ Shanter.”

Burns’ yarn from the 1790s tells the story of a free-drinking townsman who stumbles out of a storm one night to discover a coven of witches holding a black mass at an abandoned church. Secretly watching them, Tam sees the Devil playing bagpipes for the ladies to dance to as their rituals grow increasingly hedonistic. Despite his sense of threat, Tam can’t help but notice how attractive one of the hellish concubines is in her short sark (or, skirt). When her dancing reaches a fevered pitch, Tam’s voyeurism overcomes him, spurring him to scream out, “’Weel done, cutty-sark!” He quickly finds himself running through countryside with a posse of possessed pursuers at his back.

“Tam o’ Shanter” may be an ideal poem for reading on All Hallows’ Eve, especially by candlelight with a glass of Cutty Sark whisky, but the true history of witch-obsession in Scotland is more disturbing than entertaining. Two centuries before Burns set down “Tam o’ Shanter,” authorities launched what became known as the Great Witch Hunt of 1597. The Church rounded up 400 women to put on trial for alleged allegiance to the Devil, many of whom were eventually executed in gruesome ways. Three more ‘great’ witch purges followed in Scotland. The last murderous hysteria happened within living memory of villagers that Burns knew as a child. Today, the legacy of witch hunts in the cities and the Highlands is captured in physical artifacts: Thumb screws and iron collars and torture muzzles – and plaques where women were mercilessly burned at the stake.

Other corners of the Highlands’ far-flung beauty are haunted by their own historic horrors. In Glencoe, where the ash-darkened bluffs punch off the planes to tower over the wet water grass, heart-wrenching lyrics from Scotland’s ballads of grief seem to linger. A tragedy took place in this glen in 1692. On a cold February morning, 78 men, women and children of Clan McDonald were slaughtered in a surprise by British soldiers, the survivors forced to die of starvation and exposure in the winter winds. It’s believed that every year on the anniversary of the massacre, the shades of outlaw highlanders can be glimpsed moving along the rocks and ridges.

The road from Glencoe eventually leads to the fishing village of Mallaig, where a ferry breaks out over the waves toward the mist surrounding the Isle of Skye. With its sweeping, volcanic slopes crawling with fog-ghosts, and its sheep wandering along cottages and castle ruins, Skye is a land of pure isolation, its shores a sanctuary of vales and waterfalls that go pouring into the sea.

This out-of-the-way place is where the infamous “Bonnie Prince Charlie” — failed leader of the 1746 Jacobite revolution — quickly escaped to while he was disguised as a woman. Today, sentimentalists can raise a glass to the price on the bonnie boy’s head at Talisker Distillery, a 185-year-old whisky operation half-hidden on the banks of Loch Harport. One of Talisker’s bottles, the ‘57 Degrees North Scotch,’ is perfect for toasting anyone: It hits the tongue as stabbing, sea salt fire with a tinge of sand and a dash of sweetness. It’s a scotch that tastes like swirled brown smoke in the glass.

Misty mornings reveal Skye’s final allure. Clouds grip the flinty, ominous rises of its bluffs as winds batter the sweep of its cold, spring-green desolation. Hikers looking for a spiritual awakening find themselves in Skye’s southern Cuillin mountains, at a place known as the Fairy Pools. Scottish ferries, like all Celtic ferries, are dreaded creatures. They’re known for crawling out of the woods at dusk to abduct sleeping infants from nearby villages. Lure has it that ferries leave “changelings” in place of the babies they’ve stolen off with as they head back to stone circles and hidden caves. One species of these crafty intruders, the Baobhan Sith, are female vampire ferries who lure unsuspecting wanderers into fatal encounters, leaving them white, withered and lifeless in the Highland heather.  Like the preternatural atmosphere found in Skye’s Fairy Glen, which is north on the island, these Fairy Pools to the south are part of a lush, awe-striking landscape that’s rumored to be active the mischievous little ones.

For writers, there’s a kind of haunting genius to this place. Native wordsmiths such as Robert Burns to Sir Walter Scot found grace in its spans of mystic openness; and that possibility’s still here in the views of waterfalls snaking through gentle meadows and crowning mountains, with their pools that beam like radiant blue glass hinting a touch of the other-worldly. It’s a final revelation for a hard land and its harder culture – the same Scotland that produces the strongest of personalities, and strangest of storytelling traditions.

Scott Thomas Anderson is also the host of the ‘Drinkers with Writing Problems’ podcast, Episode 2 of which was written and recorded in Scotland.

Be the first to comment on "Haunted Travel: Scotland’s shadows of roguery and genius"