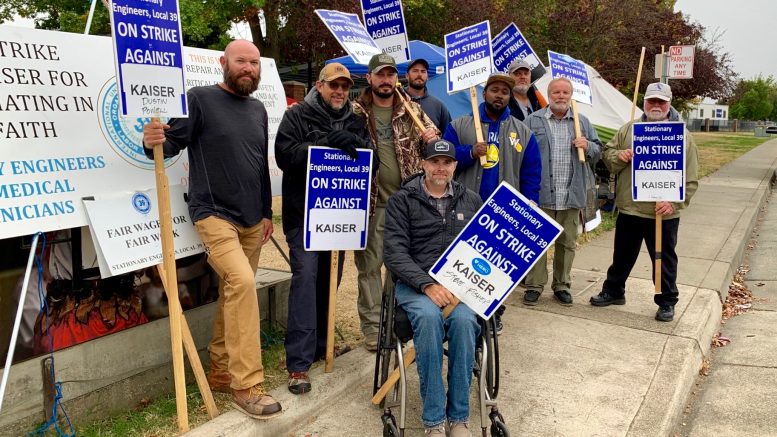 Members of Sacramento's Local 39 on their 33rd day of striking. Photograph by Scott Thomas Anderson

In a moment of extreme uncertainty, as panic began gripping the region, the clinical technicians, stationary engineers and bio-medical engineers of Local 39 were told they needed to act quickly: COVID-19’s arrival in Northern California was prompting Kaiser Permanente hospitals around Sacramento to change their layouts as they braced for patient-overloads. It would be up to the members of Local 39 to make it happen. And as Kaiser’s emergency rooms and special wings started filling with COVID-infected people, the members of Local 39 weren’t going anywhere. They’re not a “tele-commute” kind of worker – they’re literally the ones keeping the blood pressure monitors, EKGs, CT scanners and MRI machines running 24-7.

“My crew has been here through the heat of it,” said Randy Newell, a 39-year veteran of the union. “We supported all the operations. We had operating rooms we had to turn into COVID diagnostic rooms, which is a monumental thing to do. And our engineers here, we go in those COVID rooms. We expose ourselves every time.”

He added, “We’re the heartbeat of the whole place. If we don’t do our job, nobody else in there can do their job. We’re the first line of defense, really.”

Despite their ever-stalwart work during the pandemic, Local 39 members recently discovered Kaiser is trying to phase out their pension plan. It takes six years of training to become one of Local 39’s fully qualified stationary engineers, and a decade to reach a journeyman level of expertise. That’s the equivalent of a bachelor’s and master’s degree, and longer than it takes to become a certified nurse in California. Nevertheless, Kaiser Permanente wants to switch these highly-trained workers from a long-term, ‘defined benefit’ pension plan to a lesser, 401(k)-style ‘defined contribution’ retirement plan. Local 39 says Kaiser is essentially trying to “freeze” its members’ pensions, opting instead for 1% pre-taxed bonuses every year.

Kaiser’s aim mirrors a larger, four-decade trend of million and billion dollar employers steering away from providing long-term, genuinely livable pensions, and shifting to less-expensive systems that put the stress of saving and investing for retirement – and a plan’s overall liability – squarely on the shoulders of workers.

Local 39 says it tried to negotiate with Kaiser beginning in June, but the sticking point of the pension – something workers at several massive companies across the U.S. are suddenly drawing the line on – caused talks with the health care giant to ultimately break down.

When members made it clear they wouldn’t sign on Sept. 17, they were told to hand in their keys and work phones. They went on strike the next morning. They’ve been standing in front of Kaiser’s Sacramento-area hospitals ever since. Sometimes they’ve had the blinding sun in their eyes on 97-degree afternoons. Other times they’ve been walking with signs on bitterly cold mornings. Now, the rains are coming.

For members of Local 39, the fight for their future goes on.

“I’ve been with Kaiser for 24 years, and I came here because it was a career with stability, longevity, health, retirement – the whole nine yards,” said union member Dustin Powell. “Now they’re threatening to take the pension from us, and pull it right out from under our feet. After 24 years, they just want it to die on the vine.”

Local 39’s cadre of members are not the only ones striking to defend pensions at the moment. More than 10,000 workers in Iowa, Illinois and Kansas have been on the picket lines of multi-billion-dollar farming equipment manufacturer John Deere since mid-October. Among the reported reasons for that strike is John Deere’s insistence on eliminating pension plans for newer employees. The assault on solid pension plans has been accelerating since 2006, when computer giant IBM abandoned its in favor of a lower-grade 401(k)-style retirement offering. Major companies like Motorola, Verizon Wireless and Lockheed Martin have since followed suit.

This trend, which critics say is a canary in the coal mine for eliminating America’s middle-class, is something Kaiser Permanente was willing to defend when Local 39 walked out the door Sept. 18.

“We are seeking no takeaways in our contract proposal with Local 39,” Kaiser said in an official statement. “We are offering wage increases and bonuses that would provide employees with an average of $3,600 more each year. This would keep our operating engineers among the best compensated in their profession and continue to ensure that we attract and retain the most highly skilled professionals. However, in the midst of an economic downturn where people are struggling to keep their health care, the union is demanding increases that would make it even more difficult for us to keep health care affordable for our members.”

Kaiser’s statement also mentioned that Local 39 members have a pension plan, but it did not mention freezing or phasing out that plan. For union members on the picket line, that’s telling. So too are news reports that Kaiser has, in recent years, been paying its CEOs upwards of $16 million-a-year to run its nonprofit hospital system.

In the meantime, Kaiser has reportedly contracted with A.C.C.O. to maintain its vital medical gear and equipment: A.C.C.O. is an engineering systems company largely known for maintaining government buildings in Elk Grove and Placer County. Local 39 is not impressed.

“I think it’s disingenuous for Kaiser to put out these statements about how they’ve been prepared for the strike and hired capable people to come,” Newell said. “I can tell you that the contractors who are in there right now are not capable of doing the job we do. I’m sure they can fix an ice machine.”

Newell stressed his members would never have endured 35 days of being outside if they didn’t think the stakes were extremely high.

“There’s been a lot of talk through many decades now about different industries losing their pensions altogether,” he stressed. “With the sea changes in our society in the United States, over the last several years, we’re getting treated as if we were billionaires not putting out our fair share. I would want America to know that ‘defined contribution’ is the problem … I don’t know if they picked on us because we’re smaller; but we are the only ones left with a pension plan.”

7 Comments on "35 days and counting: Sacramento Kaiser’s essential workers are battling to keep their pensions"