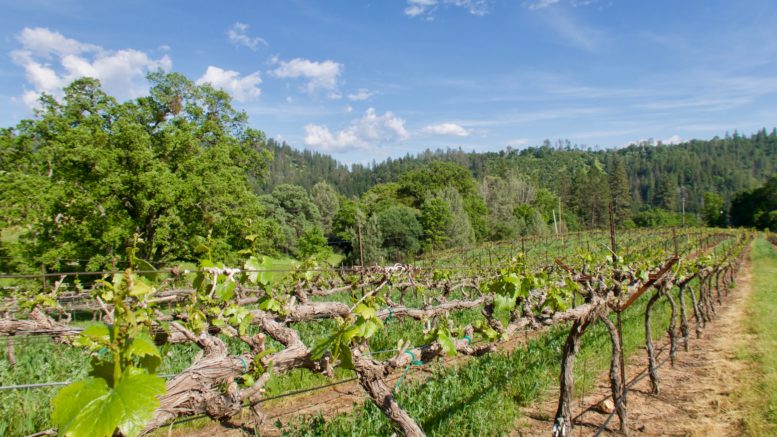 Books, French wine, fruit and fine weather. That was John Keats’ recipe for happiness and there are spots in our nearby hills to enjoy it all while also indulging in the poet’s obsession with natural beauty.

From Amador City to the far edge of Placerville, some winemakers aren’t just committed to offering earthy vino, but also to crafting calm, rustic havens with the most environmentally pure traditions.

It’s a Friday and there’s a sun-blinding sky over the gentle oak woodlands of north Amador. Epimeliades, a lanky half-Pyrenees, half-Anatolian-shepherd puppy, flashes a panting grin as she dances by the blooming vineyards. Her name is Greek for the nymphs of mountain meadow pastures once thought to protect wandering herds and flocks.

It’s an apt name because it’ll soon be her job to guard baby doll sheep at Wine Tree Farm. Owner Corinne Moore adopted this group of white wool-walkers as a means of maintaining her vineyards without spraying herbicides.

“Sheep are really good because they’re grazers, so they don’t go after the grapes, they only go after the green,” Moore notes. “As soon as we have harvest, they’ll be out there, keeping the weeds down.”

Getting Epi and the sheep are Moore’s latest attempt to move to the most sustainable farming and wine-making practices possible. The South African native has already received attention for constructing tasting and fermentation rooms that run entirely on solar power, just like her house on the vineyard’s ranch.

Conservation-minded visitors appreciate her operation, but Moore is also an award-winning winemaker. She specializes in growing and mastering syrah, grenache and mourvèdre, varietals from the Rhône region of France. Her ability to bottle and blend those grapes has earned accolades, including a silver medal from the San Francisco Chronicle in 2019.

Yet, it’s clear what gives Moore the biggest smile is talking about her animals. Since Epi is half-Pyrenees, Moore’s convinced she’ll make a good lookout for her moseying sheep.

“They’ve got a natural instinct to guard,” Moore says. “She’s still a puppy, so she thinks the sheep are there to play with.”

Moore has always seen her animals as family. Until last year, a happy Huskador named Otis greeted guests at the door to Wine Tree Farm. Now that he’s passed, Moore is paying tribute with a special vintage called The Otis Blend.

Made with 65% mourvèdre and 35% grenache, it’s a standout with finely balanced acids on an olallieberry veneer, its body brightened by shades of vanilla and slight hints of red chili pepper. A dollar from every bottle supports the county’s local animal shelter.

Twenty-eight miles north of Moore’s ranch, over the El Dorado County line, a secluded vineyard is nestled where rolling oaks give way to towering pines. Miraflores is considered one of the best high-elevation wineries in the region, and its team is doing everything it can to keep their sliver of California breathtaking.

Founded by Victor Alvarez, a pathologist originally from Columbia, this throwback to the Old World checks all the boxes for sustainable farming.

The Miraflores crew uses drip lines to irrigate, while keeping most acres open as fallow fields, so anything considered wastewater can be naturally captured and kept away from waterways and wildlife areas. Winemaker Marco Capelli also plants cover crops such as legumes and rye grass to add nitrogen and nutrients back into the earth. Beyond its soil enrichment techniques, the vineyard is also fenced in a way that keeps corridors open for wildlife, and it uses owl boxes as a green avenue for rodent control.

“Being low-impact is something our owner is really passionate about,” says Ashlee Cuneo, manager and head sommelier. “And that’s true of Marco Capelli and everyone else who works here.”

Similar to Wine Tree Farm, Miraflores specializes in Rhône varietals. It’s also recognized for its high-elevation zinfandels. Perhaps its rarest offering is the Tintoretto, an Amarone-style wine made from grapes that are hand dried on wooden racks, stomped by foot and then fermented in wild yeast. The result is a silky red with simmering cherry reflections, a faint current of cinnamon on top and warm notes of brown sugar and burnt nutmeg.

Like all of Miraflores’s wines, the Tintoretto can be sipped inside a charming tasting room that mirrors Alvarez’s love of global travel. It’s filled with relics, including a baptismal font from Italy, animal troughs from the Mediterranean and a 15th century fireplace from Cypress. These pieces add to a transporting view that looks out on the stunning landscape Alvarez and his team care so much about.

“It’d encourage people to just come out and see the area,” Cuneo says. “It has an atmosphere that’s not like any place else.”

The battle of wine and fire: Inside the struggle to save El Dorado County’s acclaimed vineyards from Caldor

1 Comment on "Going green for purple gold: Top wineries with an eco-friendly touch"