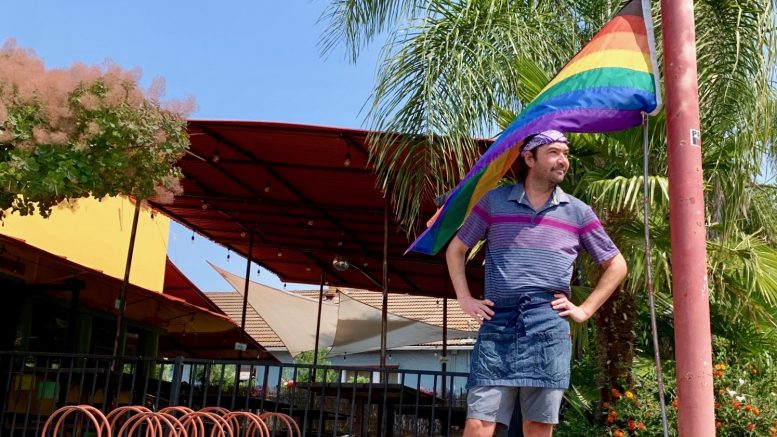 With dreams of bringing their Pacific Northwest-inspired burger menu to Sacramento, a recent run-in with vandals had the co-owners of Lucky’s Drive-In on the edge of giving up.

Add to that the kaleidoscope of everyday restaurant stresses, especially while operating during an ongoing pandemic, and it’s understandable how that moment felt like a gut punch.

“We figured the bus would get some buzz going and get people talking about us — and then, somebody tagged it,” Eskridge said. “It’s something that a lot of people can really relate to. You drive around, and you get so sick of seeing people’s businesses, and even just abandoned places, tagged. It’s just sad.”

While a number of popular Sacramento restaurants closed last year due to various hardships, including the Michelin-recognized Mother and the nearly century-old Espanol Italian, those that remain are steadfastly continuing to weather a number of unique challenges that stem directly from the pandemic.

Instead of planning the day’s menu, many restaurateurs are finding themselves constantly adjusting to a lack of staff, the steep price increases of essential ingredients and the lingering question of whether the day’s product delivery will even show up. These are just a few issues becoming part of the everyday experience of running a modern-day dining house in Sacramento — and that’s even before firing up the burners.

Chasing sunnier skies, Eskridge and Feagins moved to Sacramento from Tacoma, Washington, at the beginning of 2021. They were betting that their new hometown would enjoy their take on scratch-made burgers and crispy-coated fries as much as previous customers up North.

The couple hope their Sacramento location will be ready by the end of this year. Until then, Eskridge and Feagins continue to renovate the space that formerly housed the Hideaway Bar & Grill, right down the street from Gunther’s Ice Cream. They imagine their retro-inspired burger joint to be a place for neighborhood families to gather. And, after a few days-worth of elbow grease, they managed to scrub away most of the stubborn graffiti that covered their beloved vintage bus, which will eventually double as dine-in seating.

But when they’re not busy with renovations, the two still keep tabs on their restaurant in Tacoma from their new Northern California digs. Eskridge, who opened Lucky’s with Feagins in 2015, says restaurants across the country are dealing with a lot of similar logistical hardships.

One, Eskridge says, is due to the overall need for more product delivery drivers. At the manufacturer level, if a company runs out of key ingredients to make certain products, or if a plant temporarily closes because of a COVID-19 outbreak, it naturally creates shortages felt at the restaurant level.

Eskridge says name the product and they’ve probably run out of it at Lucky’s in Tacoma at some point. Staple items that were once easy to find at stores, including to-go cups, disposable gloves – even potato products – became increasingly difficult to keep stocked. Then, there was the time when the weekly delivery never showed up, and all they could do was hope it would come the next day.

“It used to be, ‘Great! Are we gonna have enough customers today? Let’s make some food,’” Eskridge says. “Now, it’s like, ‘Are we going to have our product today to serve the customers who do come?’”

What seems to be a common difficulty for Lucky’s, and many restaurants, is whether or not the kitchen can find the ingredients needed at supply stores, produce delivery services, or by searching grocery outlets, all in order to make those favored dishes that customers expect from their neighborhood eatery.

Over at The Shack in East Sacramento, a full-covered patio shades a merry crowd of customers who sip pints of craft beer over towering bacon-and-egg breakfast sandwiches.

It’s a place where dogs are just as welcome as folks on two legs and wobbly toddlers are allowed to draw with chalk on the warm cement. But, although The Shack appears just as bustling as ever, general manager Christopher Fairman echoes a lot of Eskridge’s frustrations.

“As far as supplies go, it’s an ever-changing array of just weirdness of what’s not available,” Fairman observed. “We had trouble getting malt vinegar packets, ketchup, chicken wings went through the roof, to-go boxes are hard to find. It’s an overall stress of not being able to have consistencies, as far as things that you normally used to be able to get in the past.”

Fairman has worked for The Shack’s owners, Gary and Jen Sleppy, for nearly 12 years. He says there are several staff members who’ve logged even more time than him. It’s a mom-and-pop spot that Fairman sees as a family with about 15 employees trading shifts to make it work.

But as general manager, he’s also had trouble finding additional staff to join the tight-knit crew, a problem he says is exacerbated by chain restaurants like Black Bear Diner offering $500 hiring incentives for new employees — a deal The Shack just can’t compete with.

“More of the larger companies are trying to get service people by giving them these big benefits to work for them, so now there’s this big battle between where people are going to go work,” Fairman admitted. “It means nothing to the chain. It’s just a weird situation because there is a lack of people.”

Popular for its buttery almond croissants and country-style biscuits and gravy, the new vegan bakery and cafe Mud Pie Stand keeps drawing fans to its location at 13th and O streets. Despite the rushes, the place manages to keep its pastry case full and grab-and-go lunches stocked between a three-person team.

But it isn’t always easy.

Founder and pastry chef Deanya Potratz says that while some ingredients such as cooking oil have doubled in price over the last three months, other staples like plant-based sausage have run out at manufacturers altogether. Pepper that with recent bouts of poor air quality due to ongoing wildfires – and the return of strict mask mandates – and it’s no wonder customers are uncomfortable dining both indoors and outdoors.

“Last week with the fires, and the masks, we were probably about $600 below our normal sales,” Deanya said. “It’s very impactful because we’re only open for about six hours, and we do pretty good on a normal day. When the mask mandate came back, people were understandably worried about eating indoors with comfort, with that confidence.”

The lack of kitchen help and availability of essential ingredients is what forced Deanya, and her spouse/co-owner, Sal, to close Mud Pie Stand for two days so they could reshape their menu, making it more manageable.

“Our distributors, they just have issues getting products,” Deanya explained. “We’re constantly spending a lot of time adjusting menus and trying to let the customers know. With all these price increases, we don’t have the time to step aside and reconfigure everything. We’re actually having to rewrite our menu because we can’t find back-of-the-house people.”

Deanya says over the past two months, Mud Pie Stand received two job applications –and both were no-shows for interviews. She acknowledges that back-of-the-house prep is hard work, especially starting at $16 an hour. More to the point, she’s currently trying to figure out how she can afford to pay more and offer better health benefits to compete with $20 starting wages and up to $1,000 sign-up bonuses offered at corporations like Amazon.

“I think people know that it’s hard work,” she reflected. “So, pay is definitely a huge factor. With that being said, we’re trying to pay a little bit more. But we’re just not even getting applications. We literally don’t even have anybody to pick from.”

Although small restaurants are constantly adjusting to supply issues, a lack of applicants, and an inconsistency in supply, for many, connecting to their community through food is what makes all those stressful days worthwhile.

The good will is there: Mud Pie Stand actually opened its Downtown location with help from more than $60,000 in independent loans and donations raised through Kickstarter.

“I truly feel like our success comes because the community speaks to us, and we listen to them, and we have a relationship with them,” Deanya stressed. “It’s interactive. They helped us get here and we want to put that back.”

The Shack’s Christopher Fairman has similar feelings, adding his home away from home wouldn’t have survived 2020’s numerous uncertainties had it not been for its dedicated band of regulars who continued to stop by and throw extra tips at kitchen and wait staff, just so they could grab dinner a few days a week.

Over at Lucky’s Drive-In, Eskridge and Feagins look forward to transforming the old Hideaway building into a place where they can begin to create similar relationships through a simple menu and their own recipes.

“When you’ve created this whole place, the amount of care that you have for it is on a different level,” Eskridge observed. “You put your heart, your soul, your money, like everything you have and a lot of your time into this because you want it to be great. There’s definitely heart involved. That’s already part of the recipe when you’re talking about a mom-and-pop shop.”

1 Comment on "Post-COVID Kitchen Confidential: Sacramento’s tough-willed cooks and pastry chefs soldier on through an upside down world"