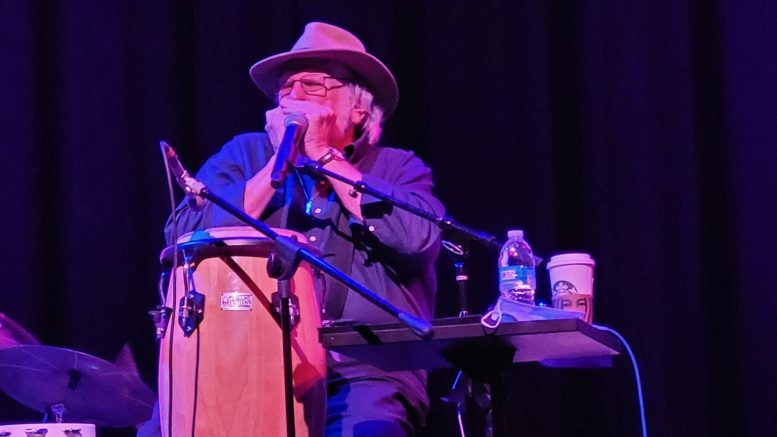 Mick Martin has become a sage of raw wisdom for Capital City musicians: ‘When they’re going through moments of self-doubt, kick them in the ass.’

When Mick Martin took the stage of The Sofia, he was supported by a cane, suspenders and a big, blistering blues band. After thanking the crowd for a welcoming and heart-felt applause, Martin—a towering harmonica player and veteran radio host—paused, glanced at his bandmates, and thankfully sighed.

“What a miracle: We’re here together,” he said as he thumbed the brim of a fuchsia-tinted fedora under the stage lights. “I ran into a woman in the parking lot who didn’t believe me when I introduced myself. She said, ‘You’re not Mick Martin,’ so I went back to the car and grabbed my hat,” Martin explained. “‘You are Mick Martin!’ I guess I’m just a hat.”

As laughter from a vaccinated and masked audience subsided, Martin and his band – a well-oiled machine comprised of seven players – began to heat up. According to Martin, this performance on Aug. 28 was the first time he’s been able to gather such a variety of players at once since 1994.

Just before the show started, three well-dressed couples greeted each other boisterously out front. A mixed bag of long-time fans and first-timers, they all shared a fond familiarity with Martin in some capacity.

“We’ve seen him so many times at the State Fair, and I listen to Blues Party every weekend,” said Sandy, one of the fans.

In the days leading up to the Sofia performance, Martin spoke with SN&R about his excitement to gather so many talented players on one magical evening. He called it a dream come true.

“I wanted to do this almost all of my career,” Martin acknowledged. “It’s hardly sustainable, or at least it wasn’t back then. There are going to be 10 performers on the stage, and that’s pretty big, especially for a band that doesn’t have a hit recording. We’re primarily local musicians, but everybody on that stage, as far as I’m concerned, is better than I am.”

Mick Martin’s Big Blues Band is made up of what its leader calls “the best from other bands,” including saxophonist Danny Sandoval, bassist AJ Joyce, trumpet and trombone player David Johnson and lead guitarist Andrew Little. The group is rounded-out by brothers Jim and Mike Caselli on drums and hammond keyboard, respectively. Martin first played with them in 1981 at the Sacramento Blues Festival.

“Danny Sandoval is the star of the band,” Martin said. “I’m just lucky to be able to play.”

Martin’s lead guitarist, Andrew Little, took the stage Saturday sporting a beard of biblical proportions – and the six-string talent to match it. He’d been acquainted with man of the evening for over a decade. Martin said that, with Little and other developing musicians, he’s always felt an instinct to encourage their growth.

“I’m a mentor-teacher, first and foremost,” Martin reflected. “I learned from mentors who—as I say—harassed me until I got off my ass and did something. I hope that’s not too grandiose. I’ve always felt that you should share all the blessings you had. When they’re going through moments of self-doubt, kick them in the ass. It’s great when you can succeed, but there’s something really rich about helping start somebody off.”

David Johnson arranged one of Martin’s ambitious stage shows in 1994. Martin, in turn, calls Johnson the most in-demand brass musician in Northern California. For Martin, the circumstance that led to Johnson playing alongside him that night are a miracle.

“David has just joined us,” he explained. “It’s come full circle. The arranger for the very first time I did a project like this is now a member of the band. It’s kismet.”

Fans were excited, too. Ernie Martinez, well-dressed in a dark green cabana shirt, joined his wife Antoinette in the front row as she gazed admiringly at the stage. The two have been following Martin’s career since his days as a writer for the Sacramento Union newspaper. Between 1976 and 1993, Martin was a journalism force in the city in addition to being a musician.

“It really all started at the State Fair,” Antoinette told SN&R. “We’ve followed Mick for years and years. It’s like being a part of a family now. We even follow his protege, Kyle Rowland. We were there when Kyle started playing with Mick.”

As the show progressed, Martin got even more firepower behind him. Popular Sacramento singers Katie Knipp and Marcel Smith accompanied the Big Blues Band as featured vocalists, in addition to Rowland, who played harmonica, guitar, and sang.

Martin said he’s known Smith for a long time. He was often in bands competing with Smith when he sang with the Sacramento group, The Soul Prophets.

“Back in the days when they had the Sacramento News and Review Sammies, he skunked us one year,” Martin remembered. “We won the next year and then it was the Soul Prophets. I think we won again, then finally got into the hall of fame.”

Knipp said Martin has been supportive of her career, playing her music on Blues Party on CapRadio, a show he’s hosted for over 30 years. Knipp thought he would be the perfect fit to play harmonica on “Bullet Train,” the closing track on her most recent album, “The Well.” Last month, Martin joined Knipp on stage at the Power House Pub in Folsom, as the two performed “Bullet Train” in front of a packed house.

“It was my first time recording with him,” Knipp said of working with the local legend on her album. “I brought him into the studio. At first, he asked, ‘Do you want me to sound like Paul Butterfield or this guy or this guy?’ And I was like, ‘Mick, I want you to do you’ – and he did him, and it was fantastic.”

She added, “So far, he’s done two shows with my band. Then, he asked me to sing a little bit of backup stuff for his encore with his band.”

Kyle Rowland was 10-years old when Martin initially took note of his potential. After a rowdy night of playing before the 2004 Sacramento Dixieland Jazz Jubilee, Martin and his band were “on their knees” when they heard a harmonica sound coming from the audience.

“I said, ‘can whoever’s playing harmonica, please stand up?’” Martin recalled with a pause, repeating himself. “‘Can whoever’s playing harmonica please stand up!?’ His father yelled ‘He is standing up!’ And he put him on a chair –a little toe-headed kid about 3-feet tall. Now he’s 28; he’s an absolute master of harmonica, a fine guitar player, he’s got a great voice. This may be the last time when I get him to sit in with me [instead of the other way around].”

Rowland also likes to tell the unusual story of how he first met Martin. He credits his father for his affinity for playing harmonica, but Martin for his success, as well as the impetus for his very first stage performance. After that day, Rowland played with Martin as a featured performer for six years.

“That day [at the festival], Mick called me on stage, and I sat in with the band. He says, ‘We’re playing at the Radisson Hotel, come on down,’” Rowland remembered. “So, I followed him to the next gig. That was 18 years ago. Lately, Mick has been hiring me to do sound for his band. Usually, I’ll end up playing the whole gig with him on guitar. He’s very supportive of me. Whenever we play together, I learn something new from him.”