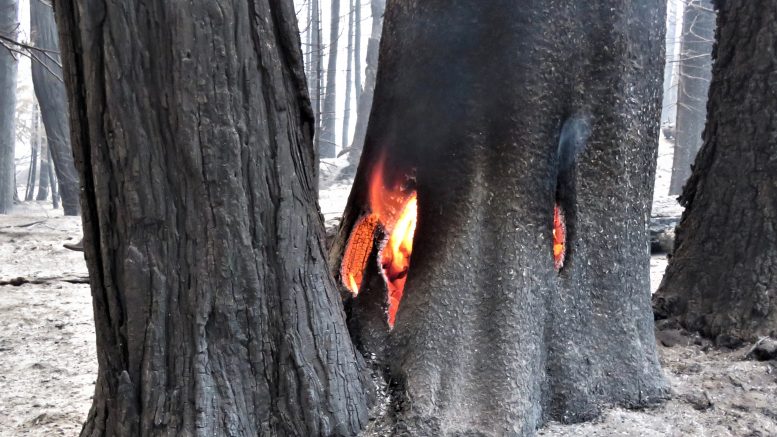 A tree surrounded by an ashen landscape continues to burn near Camp Sacramento in the Sierras. Photograph by Ken Magri

For several decades, the Sierra Nevada mountain range has been a matchbox, just waiting to ignite into the maelstrom of flames that has become the Caldor Fire. Mountain people live with this anxiety from summer to summer, and now a worst possible scenario is playing out.

Never before has a wildfire spanned the entire width of the Sierras. But this year, the Dixie and Caldor Fires both achieved this dubious distinction. One hundred miles north of Sacramento, the Dixie Fire, which started on July 13th, is only at 55% containment. And the rapidly spreading Caldor Fire east of Sacramento is only 20% contained.

Are we entering an era of the forever fires?

In 2020, California’s wildfire season started in February and lasted until the end of December. Its 9,917 wildfires burned a total of 4,397,809 acres.

This year, the first California wildfire began on January 14. As of September 1st, 6,983 wildfires have devastated 1,887,773 acres with four months to go. The term “Wildfire season” has become obsolete.

Caldor Fire vs. the jewel of the Sierras, Lake Tahoe

The Caldor Fire’s threat to the Tahoe basin is especially tragic. On August 30th, 22,000 South Lake Tahoe residents were ordered to evacuate. Since then, the fire literally flew past the Desolation Wilderness, descended down Echo Summit, entered Christmas Valley at Meyers, only to jump Highway 89 and head northeast, towards Heavenly Valley.

As of September 1st, the fire is burning along the back hillsides of South Lake Tahoe, but has yet to reach anywhere near the lake’s shoreline.

Cal Fire administrators were anxious to evacuate the south basin because of 2007’s Angora Fire, which destroyed 254 structures east of Fallen Leaf Lake. At 3,100 acres, that quick-burning fire was relatively small. But city leaders were shocked when the final damage assessment came in at $141 million.

After Angora, both public and private efforts in South Lake Tahoe have thinned some of the old-growth trees and biomass that create such devastating burn rates.

The emotional frenzy of an evacuation order, and the return

“It’s hard to focus on what to take with you,” said Jill Beebe, a Caldor Fire evacuee from Pollock Pines. “My mind was going a mile a minute.” Jill and her family have been staying with relatives in Diamond Springs since August 16th. She said she had her three-year old son make a pile of things he wanted to take.

“You have so many things going on in your mind at the same time that I couldn’t even write it down for you,” said Jill’s mother, Judy, also a Pollock Pines evacuee. Judy said she had a bag packed for a couple of months, and that “pets, people papers and pictures” were the first things she thought about.

“I forgot to lock my door on the way out,” said Judy. But Jill drove by and locked it before evacuating.

These early evacuees of the fire’s western sections, whose homes were not affected, patiently wait to return. “We’re hoping for a police caravan that will let us in and have a look around for a few hours,” said Chris, another evacuee from Pollock Pines, waiting with her dog Annie in a mini-trailer at the Cameron Park Community Center.

On September 1st, Chris and Annie received news that Pollock Pines north of Highway 50 had been completely re-opened, and the Beebes, who live on the south side, will receive their all-clear shortly.

Up in Westwood, California, a former logging town near Susanville, residents are just starting to return after a month-long evacuation from the Dixie Fire, which is still burning. Cal Fire accomplished a minor miracle by saving that tiny town from flames that approached in two directions.

“We’re a bit shell shocked still. The town is like a ghost town,” said Westwood resident Richard Biernacki, who waited out the evacuation in Benicia with his wife Berta.  “Everyone’s shook,” he said. Currently, State Route 36 leading into town is closed near Susanville. As Biernacki hoses the fallen ashes away from his lot, he says that trucks can’t get through to re-supply local stores.

Driving up Highway 50 to South Lake Tahoe, an assessment

The changes start at Riverton. From there, all the way up to Echo summit, small flames are easy to spot on both sides of the highway. Many tall trees remain undamaged, but others are merely standing. Blackened and limbless, they will collapse in the winter, if not sooner.

The ground along hillsides is burned down to ash and dirt. Central Valley residents, desperate for a strong rainy season this winter, will have to measure their hopes against the tremendous damage a heavy spring run-off and the resulting soil erosion will cause to the Sierra watershed.

Except for a handful of cabins near Camp Sacramento, almost all structures along this stretch of Highway 50, including those at Kyburz and Strawberry, are intact.

My family has owned a summer-use cabin near Kyburz since 1961. A few weeks ago, like thousands of evacuees, I urgently carried belongings up a hill in dense smoke, and tossed them into my truck.  Wildfire is just one of the reasons for the year-round anxiety among mountain folks. The others are floods, landslides, too much snow and power outages.

As a journalist, I was lucky enough to confirm that our cabin is safe. While inspecting it, I met a three-person crew of private fire fighters from Oakridge, Oregon.  They ran yellow plastic hose all the way down to the river to extinguish a spot fire on the other side. The fire had reached to within 40 feet of our cabin, and was threatening to jump across.

Up on the other side of the highway, our plastic 500 gallon water tank melted in the fire, but the small stone reservoir, originally built in 1917, was intact.

Heading up Highway 50 from Kyburz to South Lake Tahoe, flames on both sides of the road were ever-present. Upper Echo Lake served as a water station, where fire trucks could back down the boat ramp and fill their tanks in just a few minutes.

Near Camp Sacramento, homes alongside the highway burned completely, leaving nothing but ash, chimneys and charred electrical circuit boxes. Governor Newsom had visited the site earlier in the day.

Twelve miles up the highway, the Meyers Fire station set up a buffet-style dinner for fire fighters about to start their graveyard shift. With calmer winds through the night, they would challenge a burning hillside along Highway 89 in Christmas Valley before retreating at dawn to hotel rooms provided by Harrah’s Casino.

Military police from the Sacramento Army Depot were sent in to South Lake Tahoe to help with current and future evacuations. An army Humvee in the main intersection at Stateline served as a reminder for a few recalcitrant residents refusing to leave, that the city was under evacuation.

In El Dorado County, the Caldor Fire rains ash on homes like snow

Be the first to comment on "The Forever Fires"