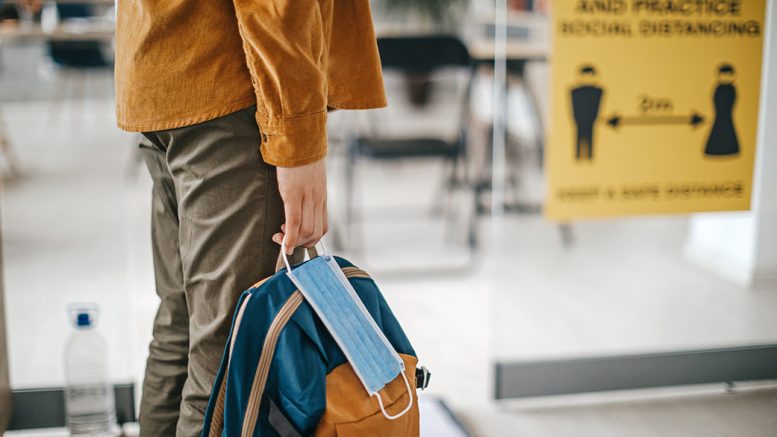 Amid rising infection rates and changing state and federal guidelines, districts are struggling to navigate the reopening of schools.

Before the novel coronavirus reached the U.S. early last year, teachers, administrators and parents in most K-12 school districts could fairly quickly answer a few basic questions: How many students in a class? What will the classroom look like? What are the rules?

That was then. Now, with many public schools in California less than a week from opening, there is no clear answer to any of those questions. Just as COVID’s brutal resurgence is straining capacity at hospitals in some areas of the country, so too has it thrown into doubt most of what school districts thought they knew about the 2021-22 academic year.

Beyond that, though, is a larger and more ominous concern: What if the rules for keeping students and staff safe at school become outdated almost as soon as they’re put in place?

“This is the issue of the moment — and in many ways, it’s a continuation of what we’ve been dealing with for the past 18 months,” says Troy Flint, spokesman for the California School Boards Association, which advocates for nearly 1,000 local educational agencies (LEA) statewide.

It is a pandemic-related brand of chaos, and some of the details may sound familiar. Amid constantly shifting state and federal guidance on masking and distancing, not to mention the explosive growth of the Delta variant of the virus, local school boards and districts are often left to fend for themselves — and to try to explain to confused or angry parents what’s going on, assuming they understand it themselves.

The California Department of Public Health issued its latest guidelines Aug. 2, just two weeks before several districts — including Los Angeles Unified, the nation’s second largest, which serves more than 600,000 students — were to open. Among other things, the CDPH declared that masks must be worn by all K-12 students when indoors, a policy first made public in July.

The agency doesn’t specify the quality of masks that may be used, nor can it know how often, say, a first- or second-grader is even close to wearing the covering properly. (Ask any parent about that.) But there’s another problem: Gov. Gavin Newsom’s administration abdicated its own position on what happens if students show up without masks or refuse to wear them.

Initially, that policy was clear. In its first announcement of the indoor requirements, Newsom’s health officials said any student without a mask wouldn’t be allowed on a campus. That guidance lasted a few hours. Under heavy fire from parents, administrators and small but vocal protest groups like Reopen California Schools, Newsom quickly backtracked and health officials revised their guidance to say that disciplinary measures would fall to local school districts and boards.

Predictably, some districts, especially those in smaller and rural areas, immediately announced that they wouldn’t enforce any such discipline. And in areas small and large, groups of parents have protested the mask mandate or demanded that their local boards ignore the rule.

“It has caused quite a controversy,” Nicole Newman, superintendent of the Wheatland Union High School District in Northern California’s Yuba County, told the education news site EdSource. “My school board says we will tell all they are required to wear masks. But there will be no consequences not to wear a mask.”

That leaves vulnerable students, none of whom can currently receive a vaccine, openly at risk. Yuba County, for example, had the sixth highest number of new COVID cases in the state over the past week when adjusted for population. But this also suggests what some health experts have feared: that some jurisdictions will simply refuse to enforce a state health mandate if it is locally unpopular or becomes a point of contention.

“LEAs are caught in the middle,” says Flint. “In some instances, they’re being asked to mediate between two passionate groups, and both groups believe they are serving students’ best interests — and often they have irreconcilable differences.”

The California School Board Association is advising its members in a straightforward manner: masks on students while indoors is the law. Beyond that, Flint says, “The LEAs will make their own decisions — but there are consequences that may go along with those decisions,” such as a district becoming uninsurable. Still, Flint notes, there has been so much back and forth on the issue — including Newsom’s flip-flop on enforcement — that many people, even some of the association’s members, may fall under the misimpression that the policy is discretionary.

Not much about the school year feels written in stone. Masks are required indoors, but not distancing. (School leaders often say they can’t push desks apart and still fit every student in the room.) Meanwhile, a budget trailer bill that passed this summer, AB 130, requires every California district to offer a distance learning option via independent study, including to those students whose health would be put at risk by physically being at school. But that risk determination is made by a parent or guardian, and even with the start of school bearing down, many families are watching the rising COVID numbers and reconsidering their decisions.

As a result, many districts suddenly have no idea how many of their students will opt for independent study. Earlier this summer, with infection rates low and a full return to the classroom announced throughout the state, administrators assumed the number would be small. Now, with rates taking off because of Delta’s high transmissibility, some districts may have to belatedly ramp up their online offerings. And independent study is not the same as the kind of remote or hybrid learning that most schools practiced last academic year, so it certainly won’t be a good fit for some students, even those whose parents want them home.

Federal input hasn’t helped. The Centers for Disease Control and Prevention initially said that only unvaccinated students and staff should be required to wear masks when indoors on campus, but it changed its guidance at the end of July to say that everyone needed to mask up if they resided in areas of substantial or high COVID transmission rates. Almost every county in the state fits that description.

Those rates may climb higher; over a seven-day period ending last week, California’s new COVID case rate was over 10,000 a day for the first time since February. Thus, even the most recent state guidance may soon be outdated. “We’re chasing our tails,” one school official said last week. “We thought we might be past it. We were wrong.”