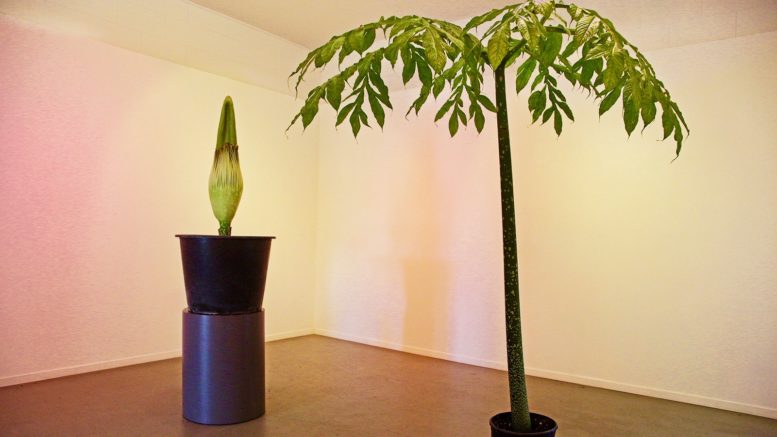 Is Sacramento smelling more like Sumatra? For the second time this summer, the fragrance of one particularly stinky flower brings a touch of tropical jungle to another local spot for viewing – and sniffing.

Another corpse flower is about to open, this time at Public Land Store, the plant/design store and gallery on 21st Street in Curtis Park. Also called Titan Arum, this gigantic bloom – which can be several feet tall – is expected to open as early as Saturday.

“We are excited to be hosting the illusive and wondrous blooming of the Amorphophallus titanum –otherwise known as the corpse flower – inside our gallery here at Public Land Store,” said Austin McManus, the store’s co-owner. “All thanks to our friends over at the Sacramento State University Biological Sciences Department, we are very much honored to be able to connect the public with such a beautiful and unearthly sight.”

Native to Sumatra, the corpse flower got its nickname due to its scent, designed to attract its favorite pollinators – small flies.

Besides their unforgettable stench, the corpse flower has another distinction. This flowering plant has the world’s largest unbranched inflorescence, that pointy thing in the middle covered with clusters of little flowers.

“In our gallery, we have an Amorphophalus titanum in its vegetative stage and the flowering one for comparison,” McManus noted.

This seems to be Sacramento’s corpse flower summer. In June, a corpse flower bloomed in a Roseville High School greenhouse. Light and temperature sensitive, Titan Arum is notoriously difficult to get to flowering stage, making two corpse flowers in one summer in the greater Sacramento area especially noteworthy.