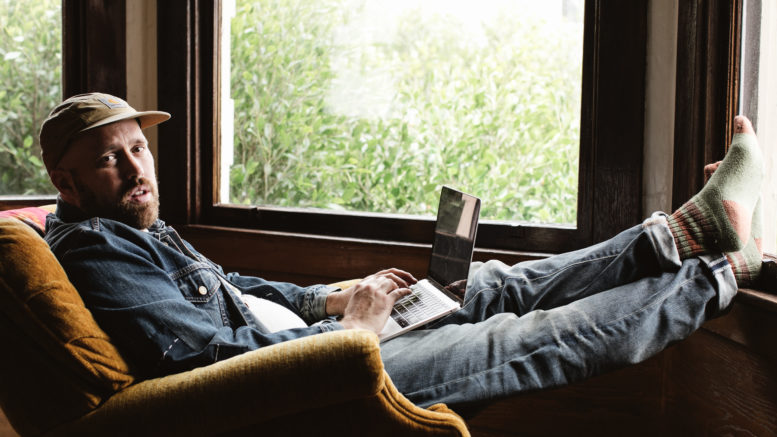 Justin Barker, who grew up in Sacramento, writes in his Bay Area home. Photograph by Robin Weir

By the time Justin Barker was 15, he was already a thorn in the side of the Capital region’s most entrenched politicians. As a kid who was struggling with being bullied, growing through an awkward phase and having an undefinable sense that he somehow didn’t belong, Barker took to spending one long summer of escape at the Sacramento Zoo.

That led to uncovering a number of troubling things.

It was 1995 and Barker – with help of concerned zookeepers – was about to take an animal neglect story public in a very big way. Before long, the teen would also be battling on a second front with the City of Roseville, advocating for two neglected bears being held captive in terrible conditions.

This latter effort is what inspired the title of Barker’s new memoir, “Bear Boy,” which has a glowing forward written by the godmother of the modern wildlife conservation movement, Dr. Jane Goodall. She calls Barker’s story an uplifting look at how even the youngest and least likely personalities among us can make themselves champions of a greater purpose. In Barker’s case, that was fighting for captive animals who couldn’t speak for themselves. It is work that Barker carries on to this day from Sacramento to the Bay Area.

Barker was 13 during that summer he’d never forget. He lived in Elk Grove, and things hadn’t been going well for him at Harriet Eddy Middle School. It was a time when adolescents rarely heard about – and almost never got to discuss in a healthy way – the experience of discovering a queer identity.

All Barker knew for sure is that he was frequently being targeted for harassment.

“It was a rough time because I was getting bullied, and things were bad,” he remembered. “At one point, I got punched in the face.”

Barker was understandably relieved when the summer break started. As the days warmed up, his father brought him on a shopping trip to a used bookstore called Almost Perfect. Wandering the aisles, Barker stumbled onto a tome titled “Kids Can Save the Animals: 101 Easy Things to Do.” He’d already had a fascination with Jane Goodall’s work studying chimpanzees in Tanzania, which he’d read about in National Geographic. But this book seemed to promise that connecting with animals – and safeguarding them – was something anyone could do.

Looking back, Barker says this random moment of serendipity at a bookstore set him on a long-term path. He started showing up every day to the Sacramento Zoo with a notebook in hand. In “Bear Boy,” Barker goes into charming detail about how he eventually befriended zookeepers at the facility, which allowed him to get insights into its very real problems, including some animals being housed in enclosures that, even then, were recognized as unhealthy and inhumane.

“Animals were dying unnecessarily at the time,” Barker remembered. “Euthanasia decisions were being delayed to the misery of some of the animals.”

The early chapters of “Bear Boy” take readers through how Barker handled these revelations, culminating with him being a kid with own office space at the Animal Protection Institute; him helping trigger an investigation of the Sacramento Zoo by the Association of Zoos and Aquariums; and him helping fuel a huge exposé on the zoo in pages of The Bee. According to Barker, all of this led to the crusading teenager getting a direct threat of legal action from the zoo director at the time.

Barker would eventually find himself speaking publicly in front of the Sacramento City Council, with then-Mayor Joe Serna offering him encouragement and support.

“I have really positive memories of him,” Barker said of the late community leader.

A bear of a problem

It started with a letter out of the blue.

Barker was in 8th grade when a woman who lived in Roseville near Royer Park sent him a desperate message. She’d been watching two captive California black bears suffering on a daily basis for several years. The woman had no idea how young Barker was, she just knew friends said he might be able to help. The bears’ names were Brutus and Ursula. They were living inside a tiny enclosure that was a holdover from a failed community zoo near Vernon Street.

Worse yet, the bears’ cage – not much bigger than a shipping container – was positioned near Dry Creek. Roseville was dealing with constant flooding in the late 90s, and on numerous winters the bears were tranquilized and moved into even smaller holding cells.

Barker’s dad drove him to Roseville to investigate. The teen was shocked by what he found. By then, Barker was well-acquainted with professional zookeepers, so he knew that this brother and sister bear duo were kept in borderline torturous conditions. When it registered that Brutus and Ursula had been living that way for 15 years, Barker was sickened.

“Brutus was lying on the second tier of the wood platform,” he writes in his memoir. “He hung his big head over the edge, swatting a fly with his paw. My heart sank when I looked into his eyes.”

Barker had discovered his new mission.

The bears were owned by the City of Roseville. During Barker’s first conversation with the man who was then the mayor, he realized he had a serious uphill battle.

“It was such a sad situation,” Barker recalled. “The mayor literally told me, ‘Those bears were born in that cage, and they’re going to die in that cage.’”

Barker refused to accept that.

The climax of the memoir involves the teen’s relentless push to give Ursula and Brutus a freer, better life.

A newspaper profile written at the time, which dubbed Barker the ‘Bear Boy,’ was eventually forwarded to Jane Goodall. Despite constantly traveling the world to raise funds and awareness for protecting the chimpanzees’ quickly vanishing habitat, Goodall decided to take the time to write this upstart activist a note of encouragement. Now, Goodall is wholeheartedly endorsing Barker’s memoir.

“This is a book that will encourage young people to follow their dreams, to work hard to achieve a goal no matter how often they are told it is impossible,” Goodall writes in the forward. “It is a book that may ignite a passion in readers to tackle an issue that has bothered them, but about which they felt powerless to do anything. It is a book that gives one hope for the future of our planet.”

Barker says the book is also poignant for him in the sense that it’s about the work and purpose that finally gave him the confidence to come out as gay. In that respect, he hopes that “Bear Boy” will show people that purpose and dedication go hand in hand with personal growth.

“I wrote it mainly for young adults, because randomly discovering a book about animal rights changed my entire life,” said Barker, who today is lobbying for changes to the San Francisco and Sacramento zoos and their breeding programs. “That book put me on a direction that otherwise would never have happened. So, that’s why I wrote this, to inspire other young people to go on their own journeys.”