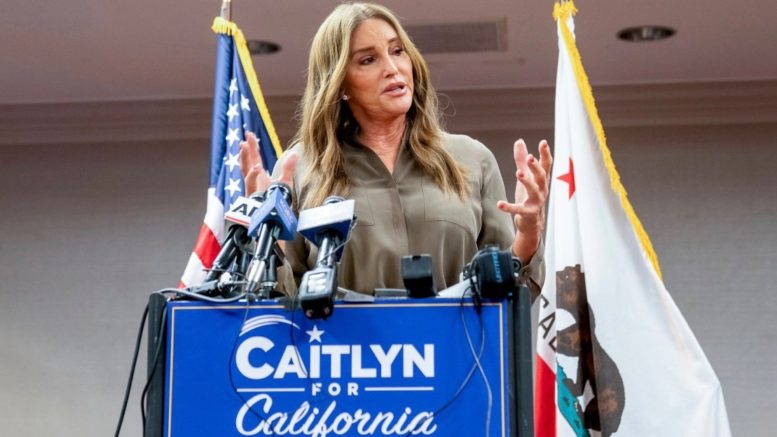 Caitlyn Jenner, a Republican candidate in the Gavin Newsom recall election, speaks to reporters at the Hyatt Regency in Sacramento on July 9, 2021. Photo by Marissa Garcia for CalMatters

By Laurel Rosenhall for CalMatters

While Gov. Gavin Newsom visited a Napa County school today to sign a budget that will expand preschool and pour a record-breaking sum into K-12 education, GOP reality TV star Caitlyn Jenner seized on a paperwork error by the governor’s lawyer to try to boost her long-shot campaign to replace Newsom in the Sept. 14 recall election.

Jenner held her first press conference before the Sacramento press corps, highlighting her decision to intervene in a lawsuit in which Newsom is suing the secretary of state he appointed and asking a judge to allow him to list himself as a Democrat on the recall ballot — even though his attorney missed the deadline for including that information.

As the Sacramento Superior Court proceeding played out over Zoom, Jenner gathered media at the Hyatt Regency across the street from the state Capitol to make the case that Newsom “absolutely blew it” on his election paperwork. Newsom, meanwhile, surrounded himself with school kids and TV cameras and signed legislation that’s part of the state’s new $123.9 billion education budget.

It was a continuation of the dynamic that’s played out the last few months and one that Californians should expect to see more of throughout the summer: Newsom is campaigning against the recall by making his work as governor as obvious as possible to voters up and down the state. Recall candidates are trying to get out their message with odd publicity stunts (like an 8-foot ball of garbage and a 1,000-pound bear), a few serious policy proposals, and attempts, like Jenner’s, to draw attention to the governor’s gaffes.

Jenner is a 71-year-old former Olympic athlete who transitioned from male to femaleseveral years ago and has had a role on the “Keeping Up With the Kardashians” TV show.

Here are three takeaways from her first news conference with California’s political press:

She didn’t have much to say

Jenner called the news conference to discuss her decision to intervene in Newsom’s lawsuit over the ballot paperwork. But she talked about that for only about a minute and 20 seconds, and her comments were vague.

“I want to make sure that (Secretary of State Shirley Weber) does her job and I want to be involved in that process,” Jenner said. “I want transparency. I want people to see what’s happening up here in Sacramento.”

Then she answered questions from reporters for about 12 minutes, speaking in broad generalities without making a single policy proposal or campaign promise: “People see what’s happening in this state. They see law and order, how it’s going down. Corruption that’s going on. We’re running out of water. I am a big advocate of fire protection, OK?”

The lack of specifics has been par for the course for Jenner. She also said in a CNN interview in May that she didn’t vote in November because she didn’t have an opinion on any of the propositions on California’s November ballot, when voters weighed in on a dozen thorny questions about criminal justice, property taxes, employment law and voting rights. Asked how she will convince voters that she can craft policy as governor if she doesn’t engage as a voter, Jenner said she has “been involved in politics from the outside” and mentioned that she once served on the California Athletic Commission.

Then her aides quickly ushered her out of the room.

Essay: Recall politics? No thanks, because the Delta keeps losing either way

1 Comment on "Caitlyn Jenner speaks in Sacramento, but not for long"