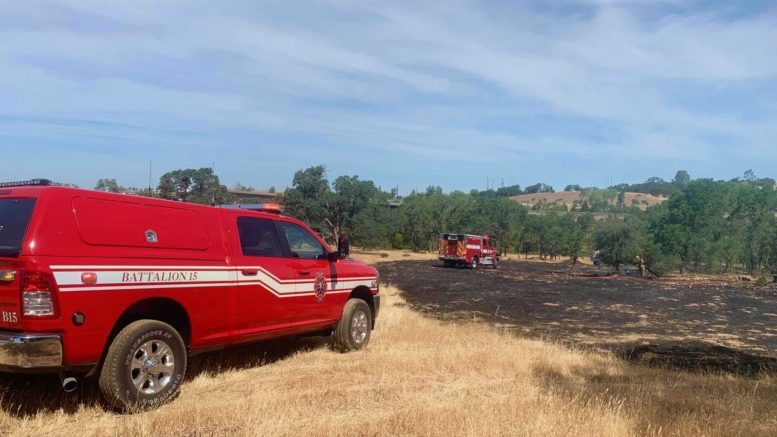 Folsom firefighters knocking down a brush fire in early June. Courtesy of the Folsom Fire Department

California is finally making major investments in inferno prevention, but is it too late for 2021?

From a rising crest on Highway 49 south of Nevada City, the sight looked like it could be the dreaded nightmare scenario: A large, grey column of smoke was billowing from somewhere inside the town of Grass Valley – a community already nerve-battered and emotionally drained from being in the path of the devastating Jones Fire in August of last year. That backcountry blaze was stopped before a “devil wind” could carry it to either of the historic gold mining towns within its reach; but the new fire that broke out last week – on June 28 – had started on the edge of Grass Valley itself.

Smoke filled the air as blue sky over the town suddenly turned to a thick ashen grey. Evacuations were soon ordered for residents living on Brighton Street and a nearby mobile home park.

Fortunately, the winds were tame as an army of firefighters gained access to the threat from Highway 20 near the Nevada County Fairgrounds. By 2 p.m., the blaze was knocked down before it caused serious damage. The event marked one of several close-calls that communities in the greater Sacramento region had in the first month of fire season, putting many on edge about what will happen when the truly menacing weather conditions arrive in August and September.

The day after the Grass Valley incident, Folsom residents got their own scare when a fire broke out near the city’s lauded historic district. It happened just after 1 a.m. as firefighters raced to the 200 block of Mormon Street, an area slightly up the hill from the north end of Sutter Street, the city’s avenue that is famous for its western Victorian buildings and array of well-known bars and nightclubs.

The blaze was also burning relatively close to the Folsom library and city’s sanctuary zoo.

Some ten engine companies and 30 firefighters were able overcome the challenges they faced in heavy brush to stop the fire before it touched nearby neighborhoods. The cause is still under investigation.

The following day, people living between Auburn and Newcastle realized that four separate fires had started almost simultaneously along a thoroughfare leading to Folsom Lake. According to Placer County officials, a series of spot fires were sparked by a vehicle’s faulty catalytic converter.

By noon, several homes and structures were threatened by the flames, though the quartet of blazes was extinguished after charring just three acres. Again, low winds were a mercy.

Between June 5 and July 1, the Sacramento region experienced at least 12 worrisome fires, which, in total, burned more than 804 acres. These included the Creek Fire in Yolo County, the Beales Fire in Yuba County, the Watt Fire in Placer County, the Equestrian and Stein fires in El Dorado County, the Goose Fire in Amador County, and the Park and Skye fires in Butte County. So far, jurisdictions in Southern California have fared even worse.

Gov. Gavin Newsom convinced the legislature to spend $1.2 billion on fire resilience programs this year. During a recent panel for Public Policy Institute of California, Jessica Morse of the California Natural Resources Agency explained that much of that money is being directed at a three-prong approach: One aspect is aimed at fire protection inside of at-risk communities, including home-hardening, defensible space and creating new evacuation routes for towns and hamlets; another element brings added precautions to the outside of communities, which entails cutting strategic fuel breaks, as well as adding broader escape routes for threatened regions; the third tactic involves general fuel mitigation through prescribed burns and forest-thinning.

“We’re investing in resilience measures across three fronts in a huge, unprecedented scale-up,” Morse said, adding that the controlled burns will be a major factor in future safety. “It’s an intervention across wildlands to return the landscapes to more of their ecological norm, rather than the catastrophic mega-fires that we’re seeing.”

Asked about the unpopularity, in some quarters, of prescribed burns, Morse replied that the stakes are too high to ignore the need.

“Last last summer, we had a quarter of the Sierra burn at high severity,” she noted. “That represents 60% of California’s water source. So, when we’re losing that ecology to catastrophic fires, it’s a cascading impact from climate change.”

To date, California’s ambitious plan to trigger controlled burns across 500,000 acres has hardly been on track, with only 50,000 acres having actually been thinned. The federal department of Forestry, which controls about 50% of the state’s wildlands, has also set a goal of mitigating 500,000 California acres through prescribed burns. State senator Bill Dodd has said local fire departments are having trouble getting insurance for these endeavors, but he’s working on a bill to address the issue.

During the PPIC panel, Assemblyman Kelly Seyarto, a 30-year firefighter who now represents the Lake Elsinore area, stressed that his profession has been imploring state lawmakers to fund mitigation for over 20 years.

Seyarto said that while the new budget priorities are good, they’re arriving far too late.