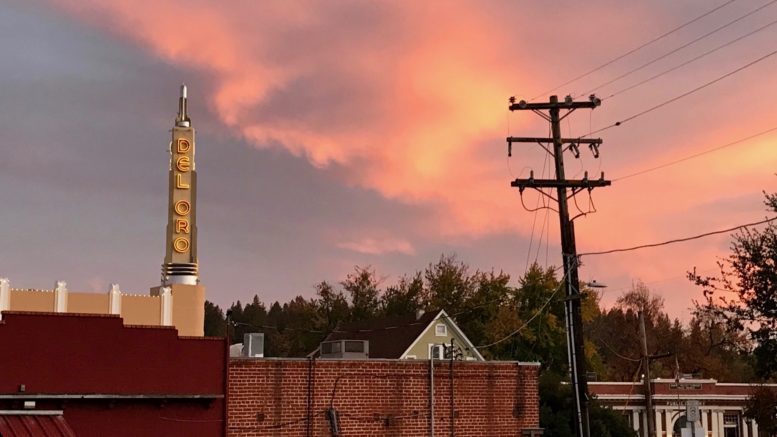 At the height of the pandemic summer, Northern California’s grand movie palaces of yesteryear were in trouble.

Historic theaters like The Crest in Sacramento, The State Theatre in Auburn and The Del Oro in Grass Valley had survived hard times before, including the Great Depression, the chaos of World War II and the financial collapse of 2008. But the peril they faced from COVID-19 had no frame of reference. Movie theaters weren’t a cultural phenomenon when the last global pandemic hit in 1918.

Abruptly forced to close their doors in March 2020, these venues were briefly allowed to operate at limited capacity in the early summer – only to be forced shut again just 16 days later. No theater owner could get clarity from state officials on when they’d be allowed to do business.

Faced with continuing to have to pay rent, mortgages and maintenance expenses for 15 months or more, while having zero revenue coming through the doors, most theater owners had to reach out to patrons for help.

The Crest Theater started a gofundme drive, which led to some 376 fans collectively donating $20,485 to help it keep afloat. And even though the theater’s doors were locked, it didn’t stay dormant. In October and November, the Crest teamed-up with the Sacramento Downtown Partnership to host Movies Under the Stars. It was a series that took place on Friday evenings, with The Crest bringing a large, portable movie screen to Ali Youssefi Square and the Partnership providing chairs, tables and infrastructure support.

The cooperation allowed Sacramentans to enjoy fall-themed films and Halloween classics in the safety of the outdoors. Movies Under the Stars was constantly sold out – and The Crest was able to keep all the earnings.

“It was a great opportunity to keep some revenue coming in for them, and it was a lot of fun,” said Emilie Cameron, district affairs and development director for the Downtown Partnership. “An iconic venue like The Crest is part of the story of Downtown. It belongs to the city’s evolution, and people have a lot of memories from going there over the years.”

She added, “Buildings like that allow us a glimpse into the past to see what made us who we are.”

The combination of willing donors and pandemic innovations worked for The Crest, at least enough for it to re-open on May 1. At that time, it had to operate at limited capacity. Now that more than 70% of California residents have received at least their first vaccination dose, Gov. Gavin Newsom has lifted all social distancing rules. The Crest and other theaters can sell as many tickets as they want, though there’s no telling what the public’s comfort level is at the moment.

Between now and July 9, The Crest will screen films with cult followings, including “West Side Story,” “Star Trek II: The Wrath of Khan,” “Ben-Hur,” “The Terminator,” “Terms of Endearment,” “All Dogs go to Heaven” and “Leaving Las Vegas.”

The Tower Theatre on Broadway Avenue has also re-opened, playing a rotation of new independent films, just as its diehard fans appreciated in pre-COVID times. It’s currently showing “The Perfect Candidate,” “Final Account” and “The Killing of Two Lovers.”

Another beloved theater that’s springing back to life as of this morning is The Del Oro. It’s now showing “The Conjuring 3,” “The Hitman’s Wife’s Bodyguard” and “Spirit Untamed,” all of which have their titles spelled out in bold, black letters across the theater’s Art Nouveau marquee.

Owned and operated for 40 years by the Getz-LaMarca family, this fixture in Grass Valley life and the greater region’s arts scene was facing the unknown last summer. Similar to The Crest, The Del Oro started a gofundme campaign, which eventually raised $81,523. The community’s rally was inspired, in part, because the Getzs and LaMarcas had employed so many young people in Nevada County over the course of four decades.

“That support was really critical,” said Azriel LaMarca, whose father Mike Getz was the driving force behind restoring The Del Oro to a fully functioning movie house that showed first-run films. “We were shut-down for almost all of 2020 and half of 2021, so we’ve really been living on those funds just to keep the bills paid.”

LaMarca noted that while a few key members of her team are returning, the dynamics of the pandemic required hiring almost an entirely new floor staff.

“In that respect, it’s more of a soft re-opening,” she acknowledged. “I think it won’t be long before we get back to something like a regular schedule; but at the moment we have to take things one week at a time. We just don’t know how many people will want to come back right away. We have no idea how things are going to be, or what to expect.”

Be the first to comment on "Lights come on at the Sacramento region’s oldest theaters, signaling hopes of survival"