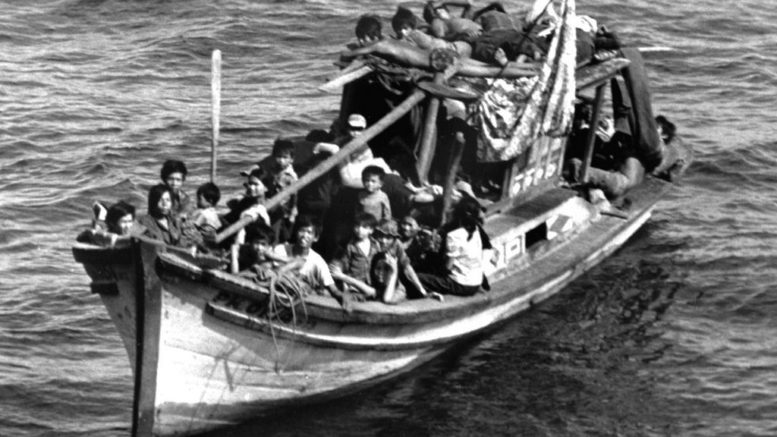 Archival photo of Vietnamese child refugees escaping on boats. Lam Le look one such boat to a refugee camp when he was 12.

Controversial Trump-era strategy carries over to the Biden administration

As a small child, Lam Hong Le watched as war engulfed his home and ravaged the surrounding communities of central Vietnam. He spent a year living in a Hong Kong refugee camp before getting sponsored to come to California. What should have been a new start became its own kind of hell, as Le found himself isolated in an abusive home and then alone on the streets as a runaway. He was sent to prison when he was 24, where he spent the next three decades of his life learning to become a different person.

Now, friends say that Le is a rehabilitated man who’s paid his debt to society and is engaged in meaningful community work. Given that, there’s been a growing sense of outrage in Northern California after Le was imprisoned in the Yuba County ICE facility for nothing more than his immigration status, and then unceremoniously handed his final deportation orders.

On Thursday, advocacy groups will hold a rally on the west steps of the state capitol at 11 a.m., imploring Gov. Gavin Newsom to pardon Le for the criminal offenses of his youth, which is now the only way to stop him from being returned to a country he hasn’t known since his childhood – a place where he’s sure he’ll face scorn and discrimination due to memories of the war.

“When we speak to each other in Vietnamese, we use pronouns that convey he is my younger brother and I’m his older sister,” said Dr. Carolee Tran, a Sacramento psychologist who’s gotten to know Le. “Our kinship comes from our shared experience as Vietnam refugees … Fortunately, I was able to re-unite with my mother, but Lam did not have the benefit of escaping with an adult family member … He witnessed the horrors of war, and experienced starvation and neglect in the refugee camps, and he was abused … His courageous journey of self-reflection and change is an incredible example of his resilience – and the power of redemption.”

Since 2008, there’s been an official agreement between the United States and Vietnam that the latter would only accept deportees who arrived in American after 1995. Three years ago, the Department of Homeland Security was accused of renegotiating that Memorandum of Understanding under the direction of the Trump administration, opening the way for deporting war refugees who arrived as children and then committed some type of criminal offense in their youth. According to a lawsuit filed by Asian Americans Advancing Justice, which was meant to shed light on the secretive negotiations, most of the refugees being targeted were guilty of minor violations of the law.

In March, with the Trump administration in the nation’s rearview, ICE agents arrested 33 Vietnamese refugees and immigrants and put them on a plane back to Vietnam, according to the Southeast Asia Resource Action Center, or SEARAC.

“Several of them fled the war, escaped persecution, spent years in refugee camps and then re-settled in the United States,” said Mandy Diec, the California director for SEARAC. “These community members were sent back to a country they haven’t known since they were young … Southeast Asian American communities were displaced when the U.S. occupied Southeast Asian countries, leading to the mass refugee crisis of the 1970s and beyond. We are the largest group of refugees who have ever re-settled into this country; and deportations fail to recognize the U.S.’s role in the war and genocide and displacement.”

Diec’s reference to genocide involves the terrible and well-documented retribution communist forces in Vietnam, Laos and Cambodia took against U.S.-allied communities after American troops withdrew in 1975.

It’s a time that Le can remember.

“It’s chaos” he recalled in his limited English during a virtual townhall last week.

Le was 12 when he and his younger brother took a four-day boat ride, alone, from Da Nang to Hong Kong. After a year in a refugee camp, he was separated from his brother and sent to live with a family in Los Angeles. Le says that he started running away from the abuse he endured when he was in the 9th grade.

Feeling he had no one, Le eventually found a new family within the city’s notorious gang life. When he was 23-years-old, Le killed a rival gang member and was sent to San Quintin. He assumed he’d be there for life.

Over time, Le started participating in various rehabilitation programs. His interactions with Jun Hamamoto, or “Auntie Jun,” a Japanese-American art teacher who volunteers at San Quintin, were especially inspiring and transformative.

Le was paroled from San Quintin in October of 2019. He was only free for a matter of minutes before ICE agents detained him, bringing him to the controversial Yuba County holding facility. There, advocates say that Le was subjected to a 24-hour-long processing ordeal, shackled the entire time, with no place to sleep. He was only fed one sandwich throughout all those hours.

“I felt so sad, so lonely,” Le remembered.

After two months in the Yuba jail, Le was handed his final orders of removal and then put in transitional housing into Oakland to await deportation. He’s since gotten a job at a homeless services provider, as well as volunteered to escort Asian-American elders around the Bay Area as the recent spate of hate crimes was happening.

Dr. Satsuki Ina, a psychotherapist who specializes in community trauma, has gotten to know Le over the last year and continues to speak with him on a regular basis.

Ina told SN&R there’s no way to ignore the role that Le’s war and refugee experience played in leading him to prison, as well as the kind of force it has been for him to overcome.

“Studies have shown that early childhood trauma, particularly trauma related to violence, alters the nervous system, resulting in not only biochemical but structural changes to the brain,” Ina observed. “Chronic states of trauma, such as living in a war zone, parental separation, physical abuse, can result in excessive release of stress hormones, leading to increased risk of anxiety and depression. So, besides these traumas, once Lam arrived in the U.S., he also lived in abject poverty, and was stigmatized, ridiculed and bullied by peers because he didn’t speak English. He was abused and neglected … The added exposure to violence from childhood, all combined, led to Lam’s susceptibility to violence and crime.”

Ina has been impressed by how committed Le has since been to his reintroduction to society. He recently helped save someone’s life from a drug overdose while doing his homeless outreach work. Le is involved with a Vietnamese-American church, is training to be a chef and plans to use his story as a way to help troubled youth.

But the Department of Homeland Security doesn’t seem interested in what Le or any of his many supporters have to say. Its agents recently told Le that the next time he checks in, later this month, he should bring his passport with him. That’s an ominous sign.

Ina co-founded Tsuru for Solidarity, a group of Japanese-Americans who use their family histories of being forced into California internment camps during World War II as inspiration for helping immigrants and refugees in the current moment. Ina says Tsuru for Solidarity is convinced Le’s only hope at this point is a full pardon from Newsom. They and other groups that include SEARAC, Sacramento Immigration Coalition and Interfaith Movement for Human Integrity, plan to exert maximum pressure.

In the meantime, Le is waiting.

“It’s the only way I can stay over here to become a good citizen,” Le said of the pardon, “and be useful to society and to the community. That’s what I want. That’s I hope for.”