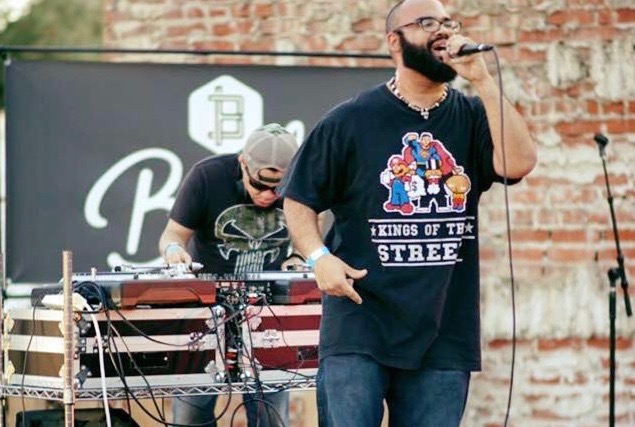 Musician, entrepreneur and die-hard hip-hop fan Max Hernandez has performed in and out of Sacramento, promoted locals acts and, more recently, done voiceover work for commercials and mobile apps. For more than 15 years he’s hustled his way through many highs and lows, but his latest evolution finds him voicing an animated show called “Max and Patrick” – and it involves conjuring a version of himself.

“Max and Patrick” is a project that Hernandez wrote, created and animated on his own initiative.

Sacramento hip-hop fans and followers of Beats, Rhymes and Nightlife, the internet radio show Hernandez hosted for over three years, might know him better by his stage name, Max Bundles. Performing under that name, he’s shared the stage as a hip-hop performer in local acts Deaf Collective, Confused Clarity and No Name Cavalcade. He has also rubbed elbows with popular local acts like Mr. P Chill, Sparks Across Darkness, Hobo Johnson, The Philharmonik and Gift of Gab.

After the 2021 New Year’s episode of his internet radio show, Hernandez decided to take a month off. During that time, he began creating and sharing short videos on Likee — an app similar to TikTok — and on his Facebook page. What started as a hobby quickly developed into an all-consuming passion project. He decided to extend the show’s hiatus.

“I’ve been taking the last few months off,” Hernandez said of Beats, Rhymes and Nightlife. “I started really getting into video editing in Adobe Premiere Pro. After COVID — just kind of on accident — the whole video editing thing fell in my lap. I figured they make Hollywood movies with it; I could probably edit short videos, too.”

Hernandez began by making videos that were never longer than a minute. He said that, at first, creating clips even that short required a lot of time and focus. As his skills improved, he incorporated animations using coding website Scratch and using license-free art for backgrounds.

“I was making some pretty crazy videos,” he recalled. “For the first few months learning the software, I would spend maybe five or six hours to make a 45-second video. Now the same video that I took [that long] to make would take me maybe 30 minutes. I’ll make other videos where I’ll spend four to five hours, and they’ll be 45 seconds, but those are more detailed [compared to what] I did before.”

After months of posting videos to his social media pages, Hernandez recently announced that “Max and Patrick” has been picked up to air on a Roku subchannel on Saturday mornings. Manager of 5iveRadioXL Jayson Hawkins, one of the two sites that streamed Beats, Rhymes and Nightlife, also manages the Global Reach channel, a video-on-demand channel available through Roku devices. Hernandez said Hawkins expressed interest in adding the animated show to their lineup.

“It got to the point where I was posting a lot of videos on Facebook and Jayson Hawkins wrote me one day. He’s like, ‘Dude! How do you sleep at night knowing you’re not doing a visual show for us?’” Hernandez remembered. “I wanted to get my radio show back, but I really wanted to do a show where I could have a green screen and play videos. Then the whole cartoon thing came about with Max and Patrick.”

As a fan of shows like South Park and Aqua Teen Hunger Force, Hernandez knew he could gain an audience using simple animation. He also hopes to use “Max and Patrick” as a platform to share his love for Sacramento hip-hop.

“In the clips I’m playing all original music from local artists,” he stressed. “I have Mr. Hooper’s music video playing on one of the scenes. I had a promo clip where I have a local artist named Rosé’s song on there. While it’s not going to be back-to-back songs, it’s going to be a cartoon where I’ll also promote musicians.”

With his ambitions for the cartoon gaining steam, Hernandez began to reach out to friends and former collaborators.  His former bandmate Adam Doyle — current bassist for a band called Dreams of Madness — contributed music to “Max and Patrick.” Hernandez counted the contribution as an honor.

“Max was a former bandmate of mine in Circus Runaways. I met him when we were looking for a singer at the time to keep Circus Runaways going,” Doyle recalled. “It kinda all fell into place. Marino, our DJ knew him.”

In an episode of Hernandez’s cartoon, the two main characters — roommates in the continuity of the show — attend a back-alley rap performance. Rebbecca Gerhardt, who raps during the episode, toured with Hernandez in 2008. At the time, she performed under the stage name Blaze.

“When I met him, Max was with Confused Clarity, which was him and one of his friends,” she said. “Them and me and Mr. P Chill — we did a West Coast tour together.”

Graffiti created by Gerhadt is also featured in an episode of the show, tagged by a separate character. In the battle-verse she contributed, she seems to be slamming a love interest who tried and failed to gain her attention.

“It’s a rap I had from a long time ago, but he said he needed the battle rap and I had that one,” Gerhardt laughed. “I started rapping when I was like 15. That’s from way back in ’95. When I first got into rapping, I was more about trying to show off, trying to be cool.”

Early episodes of “Max and Patrick” can currently be found on Hernandez’s Facebook back. He said that, once he has created an hour of material, he’ll be ready to move forward with getting the show up on Global Reach. That hour can be divided into individual episodes.

“The plan will be to cut it up in 10-minute segments and get it aired,” Hernandez said. “There’s not an exact release date, but when I get more work done, we’ll probably have a more realistic timeframe.”