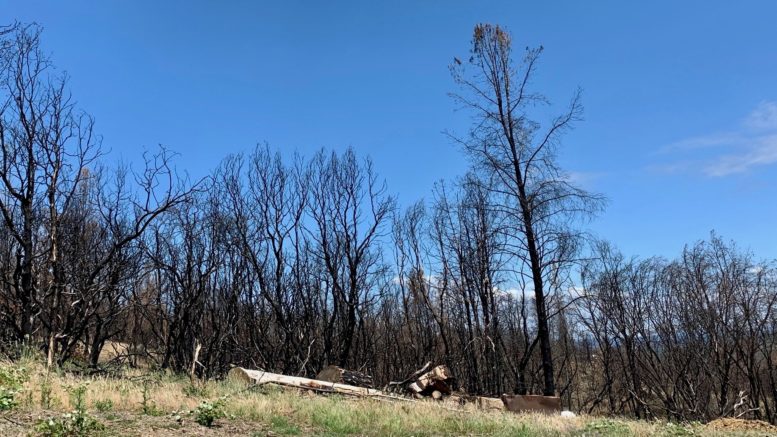 This section of burn scar in Nevada County is set to get new trees from the reforestation center in Davis. Photograph by Scott Thomas Anderson

In the first week of May, Katherine Bolte paused inside the Davis nursery she works in to admire 100,000 seedlings that were just sown. They were future redwood trees meant to be planted inside a battered, blackened scar left by the CZU Complex Fire near Santa Cruz. Sparked by a lightning strike last August, the fire killed one person, leveled more than 7,000 buildings and charred some 86,000 acres. Much of the destruction involved trees that are important to healthy air and sustainable wildlife habitat.

For Bolte, these redwood seedlings destined to heal the flame-desolated area also had a personal connection: Her own parents were evacuated from the CZU fire. Many of the people that Bolte grew up with in the Santa Cruz mountains lost their homes. She knew the next couple of weeks would be a nervous waiting game until the seedlings started to germinate; but by May 17, it was clear the first sprouts of infant trees were coming to life – and there’d be new greenery coming to the burn scar.

The operation Bolte works for, the L.A. Moran Reforestation Center, is a nursery and seed bank run by CAL FIRE.

In addition to the help it’s providing Santa Cruz, the center is also cultivating 5,000 new trees for some devastation closer to home. The Jones Fire in Nevada County was another inferno sparked by a dry lighting touch-down. It erupted in the backcountry between Grass Valley and Nevada City on August 17, forcing mass evacuations as it burned numerous buildings and 700 acres.

The work being done in Davis currently represents one of the only reforestation projects in California. With the state having just experienced five unprecedented fire seasons in a row – and the bark beetle and drought continuing to take their own pound of flesh from the Sierra – L.A. Moran’s small staff of environmental scientists have an out-sized mission ahead of them. They’re understandably trying to ramp up their efforts and expand their outreach.

“Because of how extensive the fire damage is, we’re scrambling to figure out how we can increase capacity,” Bolte said.

Bolte’s nursery is a historic institution that now has a historic challenge in front of it.

The L.A. Moran Reforestation Center was established in 1921, just seven years after California’s first great conservation writer, John Muir, passed away – and right as the state’s newest poetic prophet of Nature, Robinson Jeffers, was coming into his own. The center’s first decades saw the rise of organizations like the Sierra Club and the beginnings of what would become the modern environmental movement. Over the decades, the center has developed an expertise on readying the seeds for conifer and oak woodland restoration. Right now it largely focuses on collecting and banking seeds for pines, sequoias, and cedars, before nursing them to life. After that, the new trees are planted in spots with the most need.

That’s because massive tracs of private land in California have vital tree canopy and wildlife habitat – and in some cases they’ve been hit particularly hard by fire and tree mortality. As the latest hydrology data comes in from around the state, CAL FIRE is bracing for what could be the worst fire season yet.

“The entire state has some semblance of drought conditions,” Captain Robert Foxworthy said last month as it was announced that 1,400 additional firefighters had been hired. “The reason we’re getting the crews one early is, obviously, the weather conditions transitioning into fire season, and the drought we’re in.”

But it’s not as simple as the L.A. Moran center just handing out seeds to impacted landowners. Its team has to collect viable seedlings from many different regions of California; and then try to match those seed types to the same general areas that landowners are trying to restore. The idea is to regrow trees that are native to each burn scar.

“We’re collecting in different regions every year around June,” explained Denia Troxell, an environmental scientist who’s the assistant seed bank manager at L.A. Moran. “We really rely on our foresters to be our eyes and ears when it comes to covering the entire state of California.”

The team also relies on professional arborists and tree-trimmers who have the needed experience to climb to the top third of each conifer and collect superior seeds that reside in the cones at that height. In fact, L.A. Moran is current looking for more individuals with those skill sets to help with its increasingly necessary efforts. People with a background in forestry, arborary and tree maintenance who want to get involved can contact the center’s Seed Bank Manager Jessica Huang at Jessica.huang@fire.ca.gov or 530-753-2441.

Given how omni-present the fire threat feels around California, the team is confident its network will continue growing.

“We’re trying to gain more of those public contacts,” Troxell said. “The work we do, it’s a good challenge to have. I think we’ll get more support as people become more aware of the work we’re going here.”

Be the first to comment on "As wildfires ravage California, Davis-based reforestation center is on the frontlines of the future"