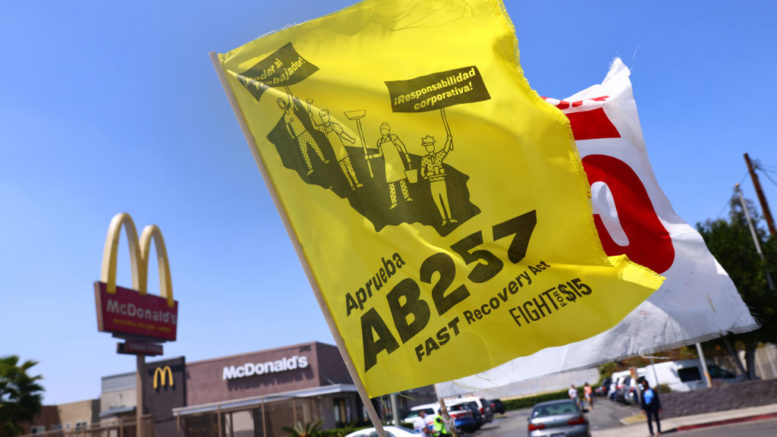 Demonstrations are happening in front of McDonalds in different parts of California. (Photo by Mario Tama/Getty Images)

While many industries made rapid changes to keep employees safe and slow the spread of COVID-19, fast food workers just kept reporting in person to their jobs throughout the pandemic. Facing significant risk from the virus, as well as from customers raging against mask mandates, workers have clung to guidelines around facial coverings, social distancing and sanitization for protection.

But according to California workers who filed more than 100 official health and safety complaints with governmental oversight agencies over the course of the pandemic, McDonald’s and a handful of other fast food chains disregarded pandemic safety precautions repeatedly, even while franchises accepted Paycheck Protection Program (PPP) loans from the U.S. Small Business Association’s COVID-19 program.

“My co-workers and I are not able to maintain six feet of distance from each other while we work,” said a complaint from McDonald’s worker Lorena Perea Elox. “We are usually about three feet apart, and we are always bumping into each other.”

McDonald’s employees also reported working alongside ailing co-workers and fearing retaliation from management if they speak out about safety concerns. “McDonald’s is risking our health, and the health of our families, by not taking action to stop the spread of COVID-19 at the store,” Elox’s statement continued.

An organizing campaign called Fight for $15, which focuses on fast food employees and other low wage workers, documented complaints addressed to county public health departments and the California Division of Occupational Safety and Health (Cal/OSHA) from employees at more than 30 McDonald’s restaurants in the state.

The most widespread concerns included insufficient accommodations for social distancing, failure to enforce face coverings for staff and customers, lax sanitization practices and a lack of communication around paid sick time and possible exposure to the virus.

Despite garnering far more complaints than other chains, McDonald’s rejected their substance and tenor, and detailed the lengths the company’s restaurants have gone to in response to COVID-19.

Beyond allegations of such safety violations, the fast food industry has long been associated with poor working conditions, wages that leave employees in poverty and practices that limit access to benefits and job security. In addition, unions are all but absent.

Fast food employees are more likely to rely on government assistance and to experience poverty than the average worker. They are also more likely to live in multigenerational households, where COVID-19 can easily spread to older, more vulnerable individuals. In March, a study from the University of California, Los Angeles, and UC Berkeley Labor Centers concluded that these compounding factors increase COVID-19 risk for fast food workers and their communities.

Among the nearly 150,000 fast food workers in Los Angeles County, nine out of 10 are people of color and almost three in four are Latino — one of the hardest hit groups in the state. “Nowhere is the racial and economic inequality of COVID-19 transmission among essential workers more pronounced than in Los Angeles, where deaths among Latinx residents increased by 1,000% between November 2020 and January 2021,” the authors write.

The franchise model, which is prevalent in major fast food chains, can also contribute to unfair labor practices. Franchising allows individuals to own and operate restaurants under well-known brands by paying royalty fees. But the franchise structure can allow such shops to avoid corporate oversight at the ground level.

On a different level, franchises are considered independent, which means many are eligible for COVID relief Paycheck Protection Program funds for small businesses. PPP loans are intended to prevent companies with revenue stalled by COVID-19 from laying off employees, and to help cover pandemic-related expenses, including safety upgrades, according to the Small Business Administration. If certain criteria are met, companies don’t need to repay the loans at all.

Fight for $15 collected complaints from 32 McDonald’s restaurants, all of which received PPP loans. However, despite the influx of cash earmarked for pandemic hardships — millions of dollars in some cases — employees described working in close quarters, having limited access to personal protective equipment (PPE), poor enforcement of masking requirements and barriers to receiving paid sick time.

In a statement to Capital & Main, McDonald’s USA disputed the employees’ accounts, writing, “These claims mischaracterize what is happening in McDonald’s restaurants, including at the Monterey Park location, where we are upholding the highest standards of safety and hygiene.”

“Since the start of the pandemic, McDonald’s has enhanced nearly 50 processes with the safety and well-being of crew and customers top of mind, including requiring masks, gloves, protective barriers, daily wellness and temperature checks and adherence to social distancing guidelines. PPE is, and has been, in ample supply, including the distribution of over 100 million masks to restaurants across the country.”

With repeated worker complaints going to Cal/OSHA and public health departments up and down the state, advocates have criticized the government agencies for what they see as an underwhelming response.

An Oct. 6 letter from the Service Employees International Union to the L.A. County Board of Supervisors claimed the County Department of Public Health had not “meaningfully responded” to a half-dozen reports between June and September that detailed a potential outbreak at a Boyle Heights McDonald’s and said four employees were fired for speaking out. Supervisor Hilda Solis acknowledged the letter by filing a motion specifically asking the department to respond. (Disclosure: The SEIU is a financial supporter of this website.)

In a statement to Capital & Main, the county health department defended its actions to address reported cases and outbreaks of COVID-19, explaining that its staff “contacted store management” and identified “close contacts at work” to make sure infected individuals quarantined at home.

The statement also noted that the department passes on to the California Labor Commissioner’s Office labor issues that involve sick time and retaliation. In February, the Labor Commissioner’s Office confirmed the allegations of retaliation, hitting the Boyle Heights franchise’s owners with a fine of more than $125,000 and requiring them to reinstate all four fired employees.

“It’s outrageous that a store that illegally fired workers for raising the alarm about COVID-19 safety failures should get a federal loan meant to keep people in their jobs. That’s our taxpayer dollars. It’s not right,” said Lizzet Aguilar, one of the fired and later rehired workers, in a statement to Capital & Main.

The Boyle Heights restaurant is also linked to one of two cases identified in a new reportfrom Physicians for Social Responsibility-Los Angeles where infections may have spread between multiple stores employing the same workers. “Most of us have two fast food jobs — you can’t pay your bills with one job — so COVID-19 could easily spread from McDonald’s to McDonald’s,” says a complaint about a San Jose franchise by Maurilia Arellanes, a McDonald’s veteran of over two decades.

Despite the danger, McDonald’s employees across California reported a lack of transparency regarding COVID infections among their coworkers. Employees described being told to come in with COVID-19 symptoms, as well as being paid for fewer hours than usual when they used sick time. Some complaints from a San Francisco store even alleged that managers tried to cover up positive COVID tests among staff. Capital & Main attempted to reach store management for comment. This article will be updated if we receive a response.

“Even though a lot of people were getting sick with COVID-19 at the store, management did not notify all workers that there were positive cases and did not quarantine all close contacts,” says a complaint from worker Sofia Lima regarding the San Francisco McDonald’s. “When I told a supervisor . . . that I had COVID-19, she told me to be quiet and not to tell anyone I had tested positive.”

Amid such complaints, the report from Physicians for Social Responsibility-Los Angeles highlighted how conditions in the fast food industry could have influenced the wider pandemic. “In this study, observations of workplace conditions and COVID-19 infection by workers suggest that workplace transmission among fast food restaurant workers has been a potentially significant, ongoing contributor to the COVID-19 pandemic as well as to disparities in COVID-19 disease burdens,” the report says.

“This has not been a field in which there have been unions, and of course that leaves workers in a position of very little strength,” California State Assemblywoman Lorena Gonzalez (D-San Diego) told Capital & Main.

In January, after seeing how the pandemic exacerbated the inequities facing fast food workers, Gonzalez introduced Assembly Bill 257, known as the Fast Food Accountability and Standards (FAST) Recovery Act. In addition to closing loopholes related to franchises and shielding whistleblowers from retaliation, the bill would establish a Fast Food Sector Council, which would bring workers together with business advocates and government agencies to set new labor standards for fast food. “Knowing the industry, they could sculpt more appropriate laws and regulations,” said Gonzalez.

Aguilar welcomed the possibility of new legislation. “AB-257 would give workers like me a voice in setting statewide standards,” she said.