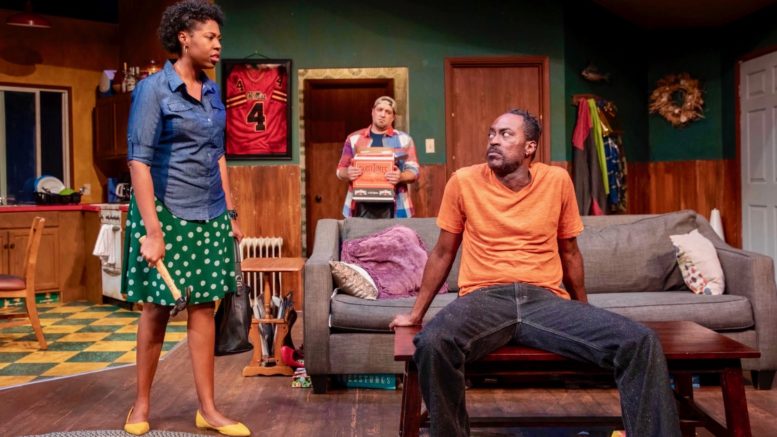 B Street Theatre’s artistic producer, Dave Pierini, remembers when the Mainstage at The Sofia was alive with laughter and the magnetic energy that exists between actors and their audience.

The comedy-drama, Byhalia, Mississippi, had just premiered to rave reviews last March when the pandemic forced the company’s doors closed. Optimistic, Pierini, who’s been on stage and behind the curtain at B Street for nearly 30 years, says his hopes for a temporary pause to the theater’s season were crushed as he watched each play scheduled throughout the year get canceled in succession.

The theater has now sat dark for more than a year.

“Actors, we’re a weird bunch. Obviously, we chose a career where we get applause at the end of our workday,” Pierini says. “All of a sudden that has been taken away from us. The reason why we all chose to be theater actors, as opposed to going down to L.A. and trying our hand at film and TV, is because we really like that live aspect. That interaction, that energy that you get from a live audience is special.”

The uncertainty surrounding live theater’s safe return to the stage during the pandemic and the severity of how it would impact B Street’s talented company of actors became a sobering reality once the theater reduced its staff, recalls producing artistic director Buck Busfield.

“It’s been a painful survival. We had 50 to 60 people on payroll and now we have 12,” says Busfield, who’s the brother of B Street’s founder, actor Timothy Busfield. “It was a painful adjustment and that’s the first thing we did to get through. But secondly, our donors, our fans, have been donating money regularly, like they always do, without an interruption.”

Busfield and Pierini credit B Street’s supportive community, who donated overwhelmingly during last year’s Big Day of Giving fundraiser, with helping to raise more than six figures in donations during the live telethon event. They’ll do another live telethon for Big Day of Giving this week on May 6, starting at 2 p.m. To watch, visit bstreettheatre.org/big-day-of-giving.

B Street also got assistance from federal grants that kept staff and bills paid.

“We knew we were going to have to shutter the doors and leave the building empty,” Pierini says. “But here’s what B Street’s good at: We immediately pivoted to a virtual presence.”

Montoya started a Friday night concert series called Six Feet Apart with a blend of local and national musicians performing intimate sets for at-home listeners, followed by a q-and-a with the audience.

There’s also Maximum Occupancy, a long-form improv showcase with actors Stephanie Altholz and Tara Sissom; B Social, a variety talk show packed with running gags hosted by Pierini; and Re-Imagine, a social justice series that amplifies the voices of Black artists and people of color.

But with B Street’s virtual content keeping people entertained at home for the past year, Pierini says there’s nothing quite like a live, in-person performance on stage. It’s a feeling that’s captivated him as an actor and producer all these years.

“It’s an art form that, once people get a taste of it, they don’t ever want to lose it,” Pierini says. “The fact that we’ve lost it for a year as a result of forces completely outside of our control shouldn’t deter. If anything, I think it’s going to encourage people to come back in even bigger numbers.”

So when will the B Street Theatre welcome audiences back into The Sofia’s massive 45,000-square-foot art complex? Pierini says he’s cautiously optimistic for a fall return.

For Busfield, he wants to reopen safely — and he aims to do it once.

“I’ll make that call when it comes and when there’s no guesswork involved,” he says. “I want to reopen once and do it right. I don’t want to do it if there’s uncertainty about the willingness of the public to come. I’m not looking for 100% capacity, but I just want to know that the overwhelming number of people are eager to come.”

For now, the actors and creative staff that keep B Street’s reputation as an award-winning, roll-up-your-sleeves theater company that’s thriving virtually are looking forward to a return to the stage when everyone can laugh together again.

“I think that theater can help us put this whole year in perspective,” Pierini observes. “B Street’s not going to come out and do a play called The Pandemic or anything like that. We’re gonna do some smart comedy that’s going to have people laughing. That alone. That shared experience of laughing together in a crowd or being moved in a similar way with other people around you is the whole reason why theatre is still a viable art form.”

Be the first to comment on "Returning to B Street"