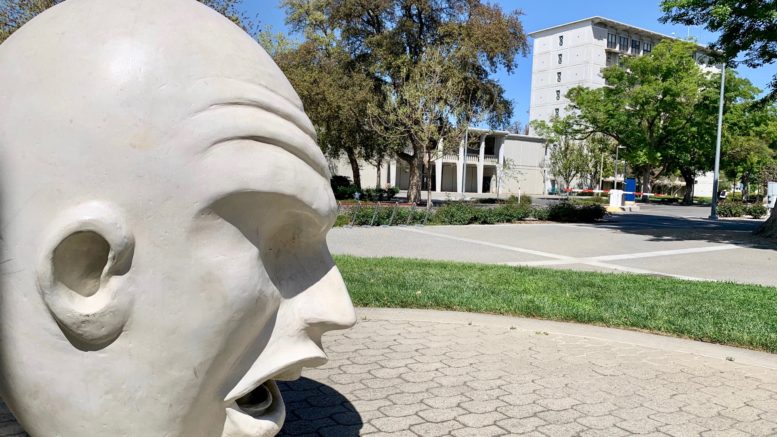 Linda Katihi's reign at U.C. Davis was an embattled one. Photo by Scott Thomas Anderson

As generations of alumni try to keep KDVS FM intact, they’re battling a proposal that started with the controversial college leader who many would rather forget

It’s 2021, yet the long shadow of Linda Katehi is still casting across the lawns of U.C. Davis.

While the former chancellor was ensnared in a flurry of scandals before departing five years ago, it turns out there’s still another fracas with her fingerprints on it – one that went off this month like a long-buried bombshell.

On April 2, U.C. Davis announced that its student-run radio station KDVS FM is being evicted from the building that’s housed it for more than five decades. The studio, a colossal cornucopia of vinyl that has bolstered local musicians and artists since 1964, will now get stuffed into a space that is roughly three times smaller than where the magic’s been happening for so long.

This displacement is part of the administration’s broader plan to demolish the historic Freeborn Hall.

Though KDVS’s current general manager Noel Fernandez has expressed support for the move, his stance has been somewhat overshadowed by a push to keep the station whole, one driven by numerous former KDVS managers and at least a thousand students, alumni and volunteers. A joint letter signed by ten previous KDVS managers sums up their argument.

“This plan will be extremely harmful to the function of the radio station, its historic and ongoing mission, and the wider community KDVS serves,” the letter reads. “No deadline that would require such a precipitous and highly unfortunate move has been identified. The University’s current plan will permanently change KDVS to its detriment.”

In 2018, U.C. Davis declared that Freeborn Hall needed to go because it failed to meet seismic standards for safety. However, a series of emails that were obtained through the California Public Records Act raises serious doubts about that being the actual motive.

On July 10, 2015, David Lawlor, then-Vice Chancellor for Finance, Operations and Administration, sent an email to Katehi and other administrators that read, “As you know, we have an opportunity at the Freeborn site to build or renovate – and do something special as a centerpiece location on campus. With significant capital construction looming for the next decade, I think it timely for us to really scrub how we design, build and generally execute our building programs … I would use this project as a grand experiment in a highly visible way to get absolutely the best bang for our buck … This is a relatively simple project assuming we scrap the site and start afresh.”

Lawlor ended his email with a garbled sentence about leveraging “the next $2 Billion of build.”

Katehi responded the same day with, “I like this idea very much.”

But not all of the administrators on the email chain agreed with Lawlor that the plan was “relatively simple.” Adela de la Torre, then-Vice Chancellor for Student Affairs, soon replied, “So once this is flushed out and Linda agrees, we should bring (a student rep) in the loop as (the student association) has critical spaces, such as the KDVS radio station, which is very important to our students.”

Emily Prieto, then-Assistant Vice Chancellor, echoed that point, replying, “having student buy-in will be one of the most difficult pieces to navigate.”

De la Torre shot back, “If the students don’t buy in, it will EXPLODE.”

Prieto responded, “I couldn’t agree with you more.”

This exchange reveals that not only was renovating the historic Freeborn Hall apparently a viable option, but that Katehi’s team understood from the start there were reasons the student body might push back against obliterating such a musical and artistic legacy on campus.

The email exchange was also happening during the calm before the storm. At that point, Katehi had already survived withering criticism for setting off the chain of events that led to peaceful student protesters being pepper-sprayed in the face (an incident that happened in 2011 and arguably triggered one of the first mega-viral memes in internet history). However, as Katehi was encouraging Lawlor to keep planning his unspecified “grand experiment,” she was simultaneously involved in several highly questionable spending endeavors and business relationships.

In 2016, the Sacramento Bee broke the story that Katehi had nearly doubled the budget of Davis’s Office of Strategic Communications, which in turn spent $175,000 in a futile attempt to purge the internet of the chancellor’s pepper spray debacle. It then emerged that Katehi was also earning $70,000-a-year to sit on the board of the controversial private, for-profit school DeVry University, which was under federal investigation for allegedly being a diploma mill.

Katehi’s moonlighting didn’t end there. She reportedly received $420,000 in the course of two years for sitting on the board of textbook publisher Wiley and Sons, which has been criticized for predatory pricing practices against students, including those at U.C. Davis.

Lawlor resigned from U.C. Davis in May of 2016, just several weeks after then-U.C. President Janet Napolitano placed Katehi on administrative leave. Investigations were underway into the chancellor’s conduct, including whether she’d rewarded her own family members with jobs and pay raises. Even once Katehi was demoted to teaching the following year, she still managed – for a time – to hold onto the equivalent of her chancellor’s salary.

Katehi is now a professor at Texas A&M University. Prieto and de la Torre have also moved on to other universities.

The public records act request that unearthed how directly Lawlor and Katehi were involved in the plan to destroy Freeborn Hall and orphan KDVS was filed by Dr. Gerrell Drawhorn, a senior anthropology professor at Sacramento State University. The ten former KDVS managers who have been speaking out to save the station are clearly aware of it.

“We urge the University to abandon its disastrous plan, a remnant of a 2015 initiative by former Chancellor Katehi,” their letter read.

Bill Wagman has been listening to KDVS since the 1970s and volunteering as one of its programmers for 30 years. Prior to COVID-19, Wagman regularly hosted a Saturday morning folk show in the studio. That often included having live performances on the air. Wagman is worried about what will happen to the station if college administrators go through with their plan.

“A lot of things that have been part of it over the years will be a lot less feasible,” Wagman told SN&R. “It’s brought so much music to people that’s not readily available elsewhere. There’s a community impact, and I think there’s also something to be said about the impact on the KDVS community itself, and whether that community will really be able to continue.”

He added, “I don’t think the administration has much commitment to it, so we just don’t know what the future is.”

Michael Doughton is another member of the music community who’s concerned about U.C. Davis’s intentions, both for KDVS’s studio and for Freeborn Hall itself, which has hosted countless concerts over the decades and remains a classic example of modern mid-century architecture. Doughton is a former attorney for the State and performer in the band Orange Morning. He’s been lobbying the college to reimagine its options for the space around Freeborn Hall.

“What motivates me the most is my sense of outrage — as a former 27-year veteran attorney in State service — at the secrecy, the disingenuousness, the aloofness, the complete lack of transparency, of former Chancellor Katehi in making the decision to demolish historic Freeborn,” Doughton said. “Everything we’re dealing with now is a direct result of that one decision.”

Editorial: For the sake of public trust, U.C. Davis leaders must stop emulating the Katehi way