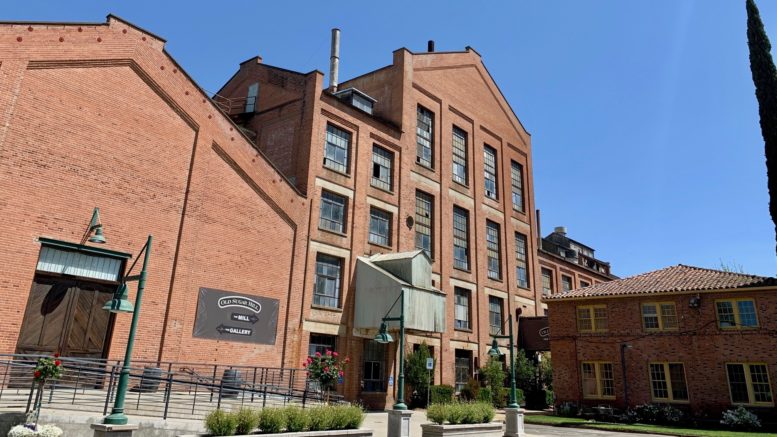 As the days get warmer, Clarksburg’s great hall of vino is pouring again

Spring skies are sparkling against the river near a stone megalith that’s tucked into scrubby cottonwoods along the North Delta. This Depression-era relic is known as the Old Sugar Mill. It was once a vault of broken glass and web-swept bricks that loomed behind quiet waterways. Now it’s a consortium of boutique wineries showcasing California’s very best vineyards fed by river wind.

It’s also the hidden gem of the Golden State’s vino scene – the Galleria Divina, or gallery of the vines.

Open, enormous and boasting plenty of outdoor seating, the Old Sugar Mill is coming alive again as a rural afternoon destination just down the road from Sacramento.

The place was the brainchild of John Carvahlo, who has family roots in the winemaking tradition that go back four generations to Portugal. Carvahlo grew up in the Pocket neighborhood by the tip of the North Delta. For years he knew the husk of the American Crystal Sugar Company stood aging and empty under the levees of the Sacramento River. But it didn’t have to be that way. Back in the 1970s, Warren and Chris Bogle had shown the world that the Delta’s soil and microclimate could produce outstanding vineyards. As more local farming families started to grow grapes and bottle wine, Carvahlo wanted to give them a central connection point in Clarksburg, one that was reminiscent of a bygone era – one that breathed a genuine sense of place.

He purchased the Old Sugar Mill in 2003 and set out to make that happen. Eighteen years later, Carvahlo’s vision has become a reality.

“I think it’s a centerpiece for the Delta, and it’s still getting more and more traction in recent years,” he said. “It’s just so close to Sacramento, and as the general awareness of the place has grown, there’s more people coming out. I think public appreciation for the Sugar Mill has never been better.”

Carvahlo and his wife Marnie still have a tasting room at the Sugar Mill for their label, Carvahlo Family Wines, but they’ve also opened a new inn and restaurant in Freeport, a fishing hamlet near the edge of Sacramento that serves as the gateway to the North Delta. Christened Carvahlo’s Freeport Wine Country Inn, it will be opening its post-COVID doors to the public again this Mother’s Day, with regular Sunday brunches to follow.

“The ability to have an inn with its own winetasting bar and restaurant was just a natural fit for us,” Carvahlo reflected. “We’re showcasing not only our own wine, but also other wineries from the Sugar Mill and around the Delta. And I think the key is that we’re right at the region’s entry point. That means it can be a stop for people spending a day in places from Clarksburg to Walnut Grove.”

And what about the wine? The Carvahlos were early champions of harvesting Tempranillo in California and they haven’t lost their touch with it. Their 2015 Tempranillo shines with a faint grape-apricot front chased by cool custard swirls and a biting glow of red and orange sweet peppers.

“The Tempranillo has been popular for us,” Carvahlo acknowledged, “and our Boat Shed Red is another wine that we sell a lot of.”

Another personality increasingly associated with the Old Sugar Mill is Roger Smith, keyboardist for the famed R&B group Tower of Power. Partnering with Mike Smolich, Smith has channeled his longtime love of vino into Bump City Winery. On most days fans can catch the easygoing musician in its tasting room, chatting about instruments, amplifiers, performances and his extensive knowledge of wine.

“I’ve been wine tasing with my partner Mike for 40 years,” Smith recalled. “What I enjoy about it is, everywhere I’ve tasted – it doesn’t matter if it’s the same varietal – if the grapes are grown in a different appellation, the wine’s characteristics, its flavor profile, and its finish, are going to be different – and that’s always intrigued me.”

By sourcing their grapes from Sonoma County, Smith and Smolich have produced some pretty intriguing wines of their own. That’s especially true of Bump City’s 2018 “Red,” a smoothly calibrated blend of Tempranillo, Merlot, Malbec, Syrah and Cabernet Sauvignon. It hits the palate with a vibrant vanilla swing enlivened by oak hues and its quick simmering contours of coco dust. It’s a red that’s elegant enough to impress guests, but affordable enough to drink with dripping meat on the barbecue.

Not surprisingly, Bump City has been forging the path for live music at the Old Sugar Mill. Prior to the pandemic, its wine club members were flocking to intimate concerts on its back patio. Smith and Tower of Power also performed at the Sugar Mill in July of 2019, using its sprawling open acres to host some 2,500 wine lovers. Smith says that if health restrictions allow, he and Tower of Power will put on another outdoor show this August.

“The Old Sugar Mill is special,” Smith noted. “It’s up-and-coming; and it’s a great destination point to just come and have a nice picnic and really enjoy wine.”

Beyond drawing renowned musicians, the site’s also taken on broader cultural dimensions with the arrival of Séka Hills. The winery is owned and operated by the indigenous Yocha Dehe Wintun Nation – and it’s been drawing a lot of folks to the Delta. The word Séka comes from the Wintun language, meaning “blue,” a nod to the tribe’s home in the lush hills and ridges along the Capay Valley. This rustic Yolo hideaway provides Séka Hills with all the grapes it needs to make Grenache, Viognier and Tannat, as well as its delicate but flavorful 2016 Syrah.

One of the most unique bottles Séka Hills offers is its 2014 Tuluka. The word “tuluka” is a Wintun term for “red,” and this vintage is as big as reds come. It blooms with smoky blackberry aromas elevated by tannin-touched cherry and hickory, all smoothed to near silk by phantom reflections of nutmeg. If there was ever a wine to pair with steaks from California-bred cattle, the Tuluka would be it.

On the other side of the gallery from Séka Hills is the Clarksburg Wine Company, a steadfast Old Sugar Mill classic for more than a decade. Winemaker Andy Gaudy’s latest big achievement is his Chardonnay, which he ages in steel barrels and then re-ages again in oak. The combination is magnificent: This Chardonnay has a clean ultra-crisp effect while conjuring hints of tea leaf and the essence of honeycomb, its finish landing with a calm, peach perfection.

There’s more than 14 different wineries housed in the Old Sugar Mill. That includes standouts like Todd Taylor Wines, whose namesake has earned a reputation for obsessively mastering the nuances of individual varietals, particularly Zinfandel, Cabernet Franc and Cabernet Sauvignon. Matt Cline at Three Wine Company is another well-known vintner, partly because he’s made magic over the years with grapes harvested from the Delta’s south waterways and a 130-year-old zinfandel vineyard near Bethal Island.

Yet even with all the Sugar Mill’s options, most visitors’ first stop – or their last – is at Rendez-vious. It’s a tasting room that rose up in the aftermath of trailblazing Napa winemaker Larry Dizmang saying goodbye to pretentious craziness and hello to a relaxed sliver of Delta countryside. That’s where Dizmang set his sights on bringing Chenin Blanc to the next level. He’s since been recognized by Wine Spectator Magazine as one of the top makers of Chenin Blanc in the nation.

Rendez-vious has also earned high marks for its Malbec and red “Delta Dusk” blend; and that’s to say nothing of how addicted people are to the ports it’s pouring. Rendez-vious latest dessert wine, “the Preserve,” is no exception. Each sip tastes like a raspberry fudge truffle that’s been gradually melted into sugar molasses, its brazen body glowing like a hot skillet. After a hard day at work, a big glass of the Preserve is sure to melt life’s madness away.

With clear days wrapped by cool delta breezes, it’s the ideal time for a tasting experience at the Old Sugar Mill. The place tends to find fans and keep them coming back, all while sharing an uncorked energy that makes the wine continue flowing into the early evening light. It can make for reflective moments on the Delta – and reflective moments with each other. As the writer Eduardo Galeano once said, “We are all mortal until the first kiss and the second glass of wine.”