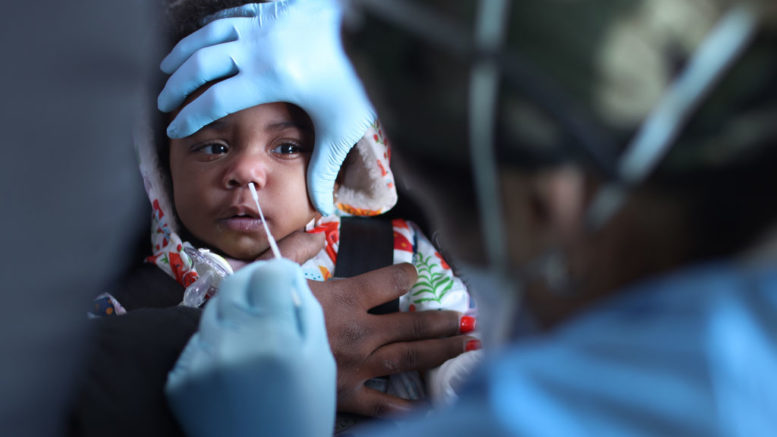 A child is tested for the COVID-19 virus. (Photo: Scott Olson/Getty Images)

It was toward the end of last summer that Martha Kuhl began to notice the numbers. With increasing frequency, parents were bringing their kids to the emergency department of UCSF Benioff Children’s Hospital in Oakland, the young patients complaining of an array of symptoms – fever, pain in the stomach or neck, rash, bloodshot eyes – that at first glance appeared to mimic other childhood ailments.

“Some of the parents were really afraid that it was COVID-19, and we had been seeing some cases of acute COVID,” said Kuhl, a registered nurse in pediatric oncology at Benioff. “But these were a kind of post-COVID case that was different.” (Disclosure: Kuhl is a member of the California Nurses Association, which is a financial supporter of Capital & Main.)

The cases were, in fact, part of a disturbing evolution: an illness called multisystem inflammatory syndrome, or MIS-C, which is marked by extreme inflammation in the body that can lead to heart failure and severely impact major organs. Many months after identifying the syndrome, researchers still aren’t sure what causes it, but they know it almost exclusively affects kids who’ve previously had COVID-19.

That’s one hallmark of MIS-C, a baffling one. The children who suffer from MIS-C may have displayed no symptoms of COVID-19, since most pediatric cases of the virus are mild, and therefore neither they nor their parents may even know they contracted it. And because MIS-C trails COVID by weeks, it may appear to families to come out of nowhere and suddenly sicken a child.

But there’s another troubling characteristic of the disease that physicians and researchers discovered early. Like the COVID that precedes it, MIS-C is disproportionately affecting children of color, particularly Black and Latino kids. Nationally, those two ethnicities account for 66% of all MIS-C cases.

“The published data on MIS-C cases from regions around the world have shown us that the demographics will mirror the demographics of the COVID surge in any given region,” Dr. Erica Lawson, pediatric rheumatologist at the Benioff Children’s Hospital’s San Francisco campus, told Capital & Main. “[If there’s] a huge prevalence of COVID cases in the Latino community, the high prevalence of Latino ethnicity among MIS-C cases will be consistent with this.”

In Los Angeles, those statistics line up ominously. Latinos make up 49.3% of L.A. County’s population, but have accounted for more than 63% of its COVID cases – and according to the county MIS-C data compiled through Feb. 25, Latino children make up 71% of the total reported cases.

In Oakland, meanwhile, “We’re seeing Black, Hispanic and Latino children disproportionately affected with MIS-C,” said Kuhl, who has nearly 40 years of nursing experience. “We’re a safety net hospital, so many of these are immigrant and undocumented children – and their access to health care in general is just so poor. I have to say that. These kids weren’t getting care before any of this, and they wind up in the emergency department now, really sick. It’s a reflection of our poor overall health care system in America.”

Although the pathology of the illness is not understood, the link between ethnicity and incidence is plain. In California, Black and Latino children tend to live in poorer, more crowded neighborhoods, where COVID infection rates run high and access to health care is spotty. (Latinos account for more than 55% of all cases in the state.) Some of those children in turn become infected with the virus, even if they never know it, and then go on to develop MIS-C four or five weeks later.

Many of the symptoms of MIS-C match up with another rare childhood illness, Kawasaki disease, said to affect roughly 5,500 children per year in the U.S. Some researchers believe that through the first half of 2020, many cases diagnosed as Kawasaki disease were in fact MIS-C, which had not yet been fully identified. In both cases, parts of the child’s body can become terribly inflamed, including the heart; MIS-C may also compromise the lungs, kidneys, brain, skin, eyes and gastrointestinal organs. Though death is uncommon, about 63% of the young patients require a stay in the intensive care unit (ICU) before recovering.

The disease is relatively rare, with 2,617 cases and 33 fatalities reported nationally through March 1. (Los Angeles’ public data shows 100 cases and one death, and the California Department of Public Health puts the statewide total through March 8 at 357 cases, the most of any state.) But it’s the trend line that concerns those tracking the disease: Over the past two months, documented MIS-C cases have been increasing, even as national COVID statistics are finally beginning to taper off.

“We’re now getting more of these MIS-C kids, but this time, it just seems that a higher percentage of them are really critically ill,” Dr. Roberta DeBiasi of Children’s National Hospital in Washington, D.C., told the New York Times last month. During the early days of reported cases of the disease last year, about half the patients at DeBiasi’s hospital required treatment in the ICU. More recently, she said, 80% to 90% of them need such care.

One explanation for the recent surge in cases is that MIS-C numbers tend to follow COVID outbreaks on a delayed basis. Thus, when the holidays produced a new spike in COVID cases, it was a matter of time before children began showing up in increasing numbers with symptoms of MIS-C. The median age for the syndrome is 9, but the illness has been detected in children younger than 1 and as old as 20.

“It’s tricky, because from what we understand, the symptoms can look like a number of other illnesses in children,” Kuhl said. “When we test a kid and they show COVID antibodies, that’s when we become more sure that it’s MIS-C – but before that, it can be very hard to tell.”

Researchers also don’t know what the long-term implications of the illness may be – whether, for example, young patients may go on to develop cardiomyopathy, which stiffens the heart muscle. Heart damage is one of the possible after-effects for adults who contract COVID.

What the scientists do know, along with the doctors and nurses who attend to kids with MIS-C, is that the illness, like COVID itself, is hitting communities of color in numbers well out of proportion to their percentage of the population. As long as low-income neighborhoods continue to lag behind the rest of society when it comes to health care in general and COVID vaccination in particular, those numbers won’t change.

“It’s sad – but it’s not a surprise,” said a worker at a community clinic near Sacramento. “The families with the toughest situations also have the least access to health care. That’s not a new dynamic.”