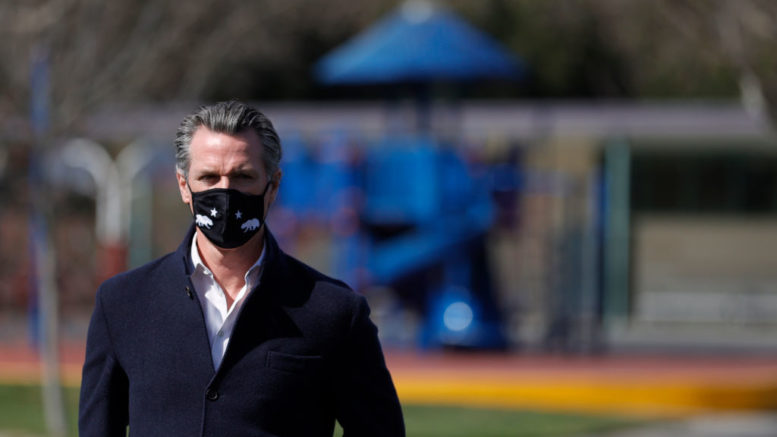 This article was produced by the award-winning journalism nonprofit Capital & Main. It is co-published here with permission.

California Gov. Gavin Newsom’s latest attempt to change the conversation around classroom reopenings, a bill passed by the state Legislature last week, is a classic carrot-and-stick approach to the state’s 1,037 school districts. It dangles the prospect of state cash before those districts that can manage to get schools opened by April 1 — but for those that cannot, the financial incentive is reduced by 1% a day, every day, through mid-May.

It’s an approach that essentially penalizes some districts for needing more time to be sure they reopen safely. Beyond that, though, the bill, which passed with bipartisan support, appears to place the emphasis on the money. In so doing, it distracts from a far more important announcement that came from Newsom’s office last week — more important, that is, if it’s fully realized.

On Thursday, the governor said that the state would reserve 40% of its available vaccine for its neediest residents. Specifically, the distribution would include about 400 ZIP codes in the lowest 25% of the census tracts ranked in the California Healthy Places index, a broad measure of socioeconomic health and opportunity that combines 25 community characteristics into a single score.

Taken at face value, Newsom’s announcement is a potential game-changer, a chance to both slow the spread of COVID-19 and speed the reopening of segments of California society by getting medicine to the hardest hit areas of the state, including many neighborhoods within the greater Los Angeles area. Last week, we wrote about the broad inequities in the distribution of vaccines nationwide, with those in lower income neighborhoods and communities of color lagging badly behind white Americans in the percentage of doses administered. The governor’s plan meets that issue with some force.

As critics have pointed out, Newsom’s idea is undeniably political. Under threat of a recall vote, Newsom is under tremendous pressure to find ways to open California businesses and public spaces, and exhausted parents and some school administrators have ramped up their calls to allow students back into classrooms, which in many districts have sat idle for nearly a year.

Currently, about 1.6 million vaccine doses have been administered in California’s most desperate communities. When that total reaches 2 million, the tipping point of last week’s announcement, the state will relax its requirements for counties to exit the so-called purple tier of infection and move down to the red tier — and when that happens, many businesses, restaurants and public spaces will be allowed to either reopen or expand their operations.

The new plan still follows California’s reopening guidelines, meaning that even with vaccine doses reallocated to the communities with greatest need, recipients have to meet the current eligibility requirements. About 70% of California’s doses overall are reserved for those over age 65, with 30% held for those in essential frontline jobs, including food and agriculture, emergency response, law enforcement and education. Within that framework, 40% of the vaccines will go to the neediest areas, many of which are significantly populated by Black and Latino families.

Over the longer term, it is this plan, not the financial inducement, that has the greatest chance of opening classrooms and school buildings. Speaking generally, it has been local or county rates of infection that have driven most school districts’ decisions on whether and when to reopen — and their families’ decisions on whether to attend.

As an example, take the Lawndale Elementary School District just south of Los Angeles. While 82% of the district’s 6,000 students come from low income families, Lawndale was nevertheless able to replace the HVAC systems in every one of its schools that needed an upgrade and to install highly rated filters. The district was found by the L.A. County Department of Public Health to meet every required protocol for opening, and it has had students on campus since October without a single reported case of COVID transmitted at school. But some families still hesitate.

“The reason our community is reticent to return is not about our programs or facilities,” said Betsy Hamilton, superintendent of the district. “It is that a staggering number have felt the direct effects of living in a community hard hit by COVID.”

It is by driving down the local rates of infection that communities may be encouraged to open up. California’s reallocation of vaccine doses to reach the neediest may accelerate that process, but only if there’s also a plan to make sure those doses get into the arms of the people for whom they’re intended.

The governor’s announcement last week was short on such details — except for one very big one concerning who is going to administer the state’s vaccination program. We’ve advocated previously for the state’s vast community clinic system to be heavily involved in the vaccine distribution process, since those clinics serve some 7.4 million Californians, many of them low income or without health insurance at all. But with Newsom choosing Blue Shield to coordinate the statewide rollout, it’s unclear whether clinics will be involved at all — and few of the state’s 58 counties even want to be a part of the program.

The result may be, once again, a fractured and inoperable attempt to get California’s allotment of COVID vaccine distributed to the places where the need is greatest. That is precisely the sort of failure that would doom any attempt at a broad reopening — and it certainly would trump the cash inducements to open schools in districts where people are still sick, struggling financially and looking for a way forward.

Be the first to comment on "Vaccine distribution key element in Gov. Newsom’s plan to reopen schools"