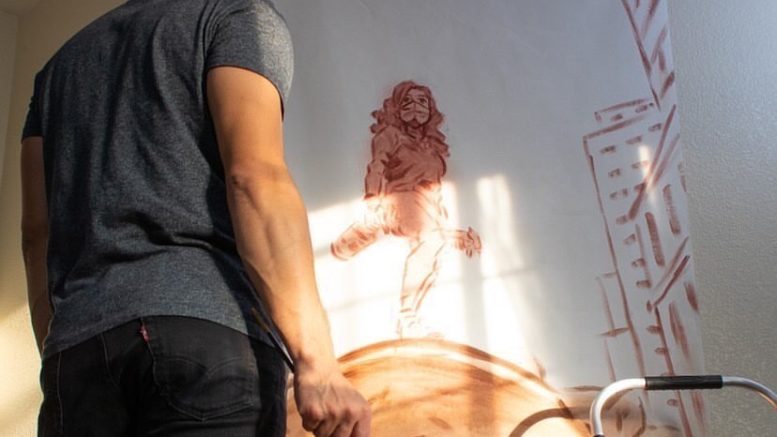 The WPA provided employment for 8.5 million Americans until the war effort reignited the economy. Since then, the unemployment rate had not reached the levels of the Great Depression.

The U.S. unemployment rate increased from less than 4% in February to more than 14% in April following massive pandemic-related business closures. The arts and entertainment sector was hit especially hard, with the jobless rate skyrocketing past 47%.

“I began to hear from artists who we annually contract for our programs, many desperate that all their livelihood had vanished in one day,” said Marie Acosta of Sacramento’s Latino Center for Art and Culture.

Acosta knew that she had to do something to protect those out-of-work artists. She partnered with Richard Falcon of Teatro Nagual and Manuel Jose Pickett of Teatro Espejo and together they formed the Sacramento Artist Corps.

“It’s really just about us coming together as a collective,” Falcon said. “I’m very proud to have partnered with [Marie] and Manuel and that the city saw fit to give us the level of funding we had.”

The three devised Sacramento Artist Corps based on Federal Project Number One, a WPA program that between 1935 and 1939 employed about 40,000 artists, writers, musicians and actors to create works that reflected the country through literature, state guides and theater pieces.

“It played an essential role in a historic crisis, and it seems to me that the artists today could assume that same role and responsibility,” Acosta said.

“Artists have a tremendous resource to convey emotion and feelings and information. Just like in a wartime effort, I think at this time, to keep our city and country going we have to look to artists to be using their expertise as well.”

Although each group operates independently, their shared goal is to provide accurate coronavirus information.

“We told the artists we started to work with that they had to have a passionate commitment to use their work to serve community,” Acosta said. “This was not a commercial venture. This was serving community, kind of like the Peace Corps or Americorps. It’s the Artist Corps.”

The 40 artists in the Sacramento Artist Corps are demographically diverse, but of particular importance to the group is the Latino community, which accounts for about 30% of COVID-19 cases in Sacramento County. That number represents more than a simple statistis for Acosta.

“I lost my brother in October to COVID, and on a personal level, the intensity of the artist corps, the short time we had to create it, my belief in it and my belief in how important it is stemmed a lot from losing my brother,” he said.

Acosta isn’t the only Sacramento Artist Corps member who has been personally affect by the pandemic. According to Falcon, several members temporarily lost their homes.

“I shudder to think what could have happened to these artists,” Falcon said. “Artists learn to live hand to mouth, but it is time that we’re able to give them somewhat of a living wage to be able to carry them through.”

The urgency of the program was not lost on Sacramento City Council member Eric Guerra, whom Acosta approached for assistance in March.

“I said ‘This is going to be devastating for people you know, that you’re familiar with, that we work with. What can we do?’” Acosta said. “At the same time the city had received funding to fund arts through the CARES Act, so he was very encouraging and gave us a lot of support to get the right proposal in to the Office of Art and Culture.”

Guerra saw an opportunity, not only to provide artists a wage, but to use their particular skills to communicate the gravity of the public health crisis, especially in the Latino community.

“In the Latino community, music, theater and art has been a way of storytelling, to tell our past and history,” Guerra said. “So it’s a very natural organic way that has an authenticity to convey how the communities are feeling and also to get information to communities.”

Guerra says that the Sacramento Artist Corps can convey critical information to families in a format that is far warmer and more meaningful than any government office.

“We have to look to this as not just funding arts for arts’ sake, but looking at artists as another tool to fund when we look at public information,” he said. “Artists have a tremendous resource to convey emotion and feelings and information. Just like in a wartime effort, I think at this time, to keep our city and country going we have to look to artists to be using their expertise as well.”

With Guerra’s support, Acosta wrote the proposal for Sacramento Artist Corps and within six weeks was approved for $300,000, with 75% of the money going directly to the 40 artists.

“As artists, we have a responsibility to be citizens, good citizens, and when something like this happens to our community, we pitch in and that’s what I hope remains as a legacy for the Artist Corps.”

Recently, Julie Baker, executive director of Californians for the Arts a statewide arts advocacy group of which Acosta is an active member, brought the group’s work before the governor’s office.

“We’re hoping that we’ll see some real support for it at the state level,” Baker said. “Artists are unemployed. Let’s—instead of having them on the unemployed roll—let’s get them to work. There’s such an important role that artists can play right now in this massive behavior change that we need to have.”

Baker says state and federal support is desperately needed to save the arts in California, especially in Sacramento.

“Sacramento unfortunately does not always have the private funding base that let’s say the Bay Area or L.A. might.  We don’t have the same level of foundations that support the arts through private donations,” Baker said. “Show me a business that can stay open after not receiving any revenue for a year. That’s fundamentally what’s happened.”

Ultimately, Baker hopes that the Sacramento Artist Corps could be an example of a potent solution to that problem.

Although much of the Sacramento Artist Corps’ work has yet to be seen by the public, the livestreaming group has been working since Oct. 19 to spread information about coronavirus through shows such as Sacramento Poet Laureate Andru Defeye’s Masked Up.

Since it premiered, Defeye has used Masked Up to share the latest “rona” numbers with a casual attitude that borders on irreverence. Masked Up plays every Monday night at 8:08 pm. On Sunday is Dominic Garcia’s bilingual Covid Loops music show, and on Tuesday is Justine Lopez’s Covid Knowledge respectively.

The other shows are Jesse Vasquez’s “Essential,” which features conversations with essential workers on Wednesdays, and “Wonder Show” in which Nosearte shows original work, including live doodling, accompanied by pandemic resources including mental health phone lines provided by Robertos Robles.

Also, the corps’ visual arts group released a coloring book that it is distributing through 1810 Gallery’s website.

In January, the corps will be releasing two live theater pieces: La Familia, Who Me? on Jan. 8 and Las Tres Mujeres, a story about three Latina women from different walks of life coming together to share their experiences of the pandemic, Jan. 28-31.

The rest of the Artist Corps projects are slated to be released throughout January and February. Despite the city CARES Act money expiring at the end of the year, Falcon says he is confident the group will remain.

Acosta says that she hopes that the Sacramento Artist Corps will be an example of the value of the arts during a historic crisis.

“As artists, we have a responsibility to be citizens, good citizens, and when something like this happens to our community, we pitch in,” she said. “And that’s what I hope remains as a legacy for the Artist Corps.”