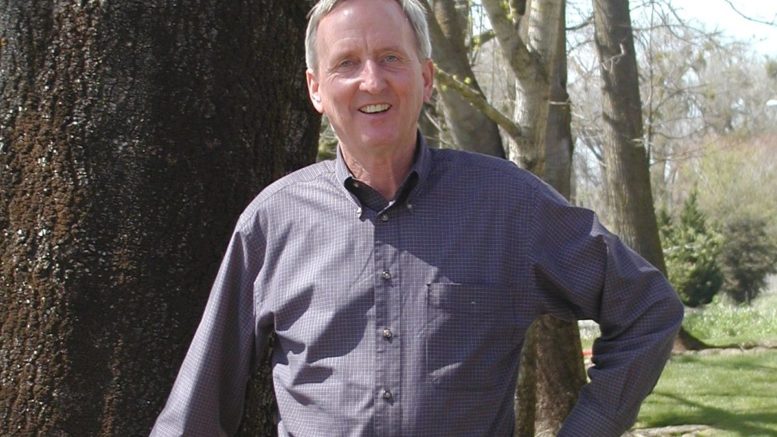 Ray Tretheway poses with one of his favorite trees, the Valley oak. (Photo courtesy of Sacramento Tree Foundation)

For nearly four decades, Ray Tretheway has been as strong and steady as a Valley oak. In the City of Trees, he has been Sacramento’s outspoken and buoyant advocate for our urban forest.

Now, it’s his turn to enjoy a break in the shade.

This month, Tretheway is retiring as executive director of the Sacramento Tree Foundation. He’s led SacTree since it sprouted on California Arbor Day in 1982. When he was officially named executive director in 1990, he became the foundation’s first full-time employee.

“When we started, our goal was to plant a tree a day,” recalled the 73-year-old Tretheway. “We planted 400 our first year.”

Now, SacTree’s total is somewhere more than a million. Every year, the foundation helps plant many thousands, mostly through its shade program partnership with SMUD, which accounts for more than 600,000 trees and counting.

“It’s been magical,” Tretheway said. “We built a great platform, a springboard to the future that’s very strong. I worked a lot of long hours, not selling a product across the counter but selling a vision. It’s now time to enjoy the world.”

SacTree is celebrating Tretheway’s legacy the best way it could—naming an oak-filled park in honor of Ray and his wife, Judy. To be shared via Facebook, a ribbon-cutting ceremony and dedication will be held at 11 a.m. Nov. 19 at the Ray and Judy Tretheway Oak Preserve, formerly the Natomas Oaks Park. For COVID-19 safety, it won’t be a public event, but will be livestreamed on Facebook, said SacTree spokesperson Stephanie Robinson.

Nearly 13 acres of oaks on River Plaza Drive near Garden Highway will be a living tribute to Tretheway’s lifetime of service. Besides leading the foundation, he also served as a Sacramento city councilman for 10 years.

The foundation is also launching a fund-raising campaign to honor Tretheway, “and gifts will go toward two initiatives very close to his heart,” Robinson said.

The first $50,000 will go to preserve the native oaks and flora of the preserve and to add amenities to support outdoor education. All other contributions will go toward the Evergreen Fund, which provides trees throughout the region.

“Our urban forest is living, natural and affects every person’s life.”

A Sacramento native, Tretheway grew up with an admiration for nature. After working in Washington, D.C., as an environmental researcher and at the Smithsonian Institution, he returned to his hometown to advocate for the environment.

“For years, ‘urban forest’ was an oxymoron,” he said. “Now, we understand that 85, 90% of our urban forest is owned and controlled by home and property owners where they live. Our urban forest is living, natural and affects every person’s life. It’s linked to our quality of life and health.”

Tretheway will continue to work with trees and people. His focus recently has been planting trees in historically impoverished (and treeless) neighborhoods.

“It’s been a dynamic career; not a job, but a pleasure,” he said. “How else do you get to live a vision?”

Editor’s note: SMUD is better than PG&E, but not perfect

Be the first to comment on "Steady as a Valley oak"