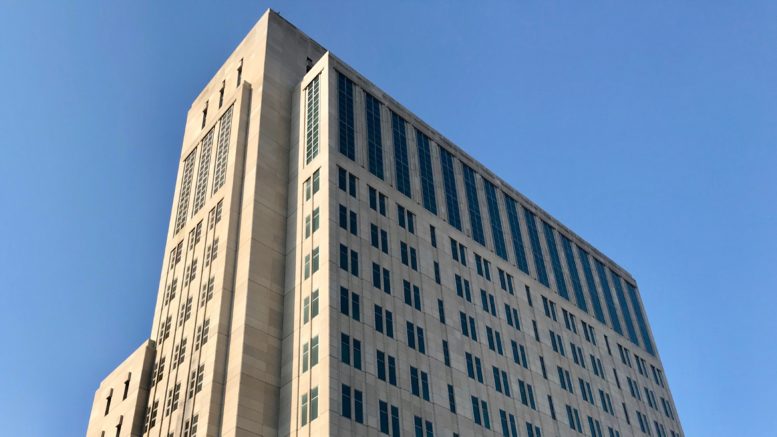 The federal courthouse in downtown Sacramento was scene of an 11-day trial on labor trafficking. (Photo by Scott Thomas Anderson)

A Sacramento couple was sentenced to 15 years each in federal prison for luring women from India to work in their home, only to subject them to coerced labor, starvation, sleep deprivation, false imprisonment, assaults and even burns on a stovetop.

Experts say that the case is emblematic of a lesser-known side of human trafficking in Northern California.

The investigation into 46-year-old Satish Kartan and his wife, 40-year-old Sharmistha Barai, began in January 2016, when a distraught 51-year-old woman suddenly appeared at the Stockton Police Department.

She had just escaped from a home Kartan owned in San Joaquin County. Agents from the Sacramento office of the Department of Homeland Security were called to the scene. The woman told them that she came to California from India on a B-2 work visa, specifically to be a housekeeper for Kartan and Barai. She was sponsored by one of Kartan’s relatives who was a friend of her late mother.

According to an affidavit filed by Homeland Security special agent Marc T. Beeson, Kartan paid to have the woman flown to Sacramento International Airport and then brought by taxi to a house he owned near White Slough in Stockton. The large, two-story residence was nestled in an upscale, gated community called Brook Hollow Circle, and its backyard and side yards were surrounded by a solid, six-foot-high wooden fence with locking gates.

The woman said Kartan and Barai began forcing her to work 18 hours a day. She was paid no money and only fed a small amount of rice once every 24 hours. The victim also recalled that whenever she slowed down from exhaustion, Barai threatened to throw hot water on her. The couple listened to the brief phone conversations they sometimes allowed the woman to have with family members back home.

After weeks of escalating abuse, the woman told Kartan she wanted to leave. He physically stopped her and demanded that she pay $2,500 to go home. Eventually, the woman spotted a chance to get out of the house and the gated neighborhood when Kartan and Baria weren’t paying attention.

Once she was with federal agents, they recorded her speaking with Kartan over the phone. He threatened to have her deported during that conversation.

Seven months into Homeland Security’s investigation, the Stockton police received a call from one of Kartan’s neighbors. The witness told 911 that a woman from India had shown up at his door frantically looking for help—and protection from the couple she was working for. She could not speak English, but used hand gestures to indicate someone had been hurting her.

When agents arrived with an interpreter, this woman said that she escaped after Kartan took out the garbage, forgetting to lock the yard gate. Her story was similar to the first victim. She was recruited through an ad in an Indian newspaper for a nanny, discovering too late that Kartan fostered an atmosphere of constant intimidation, paid her virtually nothing and cut her off from contact with her family. When Baria found out that the woman had managed to tell at least one relative in India that she was being mistreated, Baria struck her in the face, the woman told agents.

Beeson and another agent took the victim to the hospital that same evening after learning Baria had pushed her hand down on the open flame of cooking stove.

“[The victim] claimed after this incident, she’d lost feeling in her fingers,” Beeson wrote in court filings. “According to the emergency room doctor, [the victim] was slightly dehydrated and had burns on her hands that were several days old.”

On Sept. 7, 2016, law enforcement officers watching Kartan’s house spotted a 50-year-old woman from Nepal standing in the driveway. With help from an interpreter, they discovered she was yet another migrant tapped to serve as a maid in Kartan’s fortified home. The woman said that she’d yet to be paid and that Kartan had been physically coercing her into working long hours, including when she was sick. Like the other victims, the woman found herself trapped inside the house at times by doors locked with deadbolts.

Homeland security agents searched Kartan and Baria’s Stockton property, obtaining emails and text messages between the couple and the trio of known victims. This evidence collaborated much of the women’s accounts.

The agents also found clear signs there were other victims. According to court filings, Kartan had been using an Indian community portal called Pragathi.com to coax women to work as housekeepers and nannies, promising them good conditions, treatment and pay. The agents recovered numerous messages that Kartan exchanged with unknown individuals on WhatsApp. One of these texts involved a nanny who was trapped in the house in the summer of 2016. The message, sent from that woman’s daughter to Kartan, begged him to stop hurting her mother.

“She is all the time weeping,” the daughter wrote. “And scared about her situation.”

In another text exchange that agents zeroed in on, an unknown man helping Kartan recruit workers from abroad said word was getting out about conditions at the Stockton home.

“We need somebody now,” Kartan texted.

“I’m sorry, I had asked so many people, but they are scared to come to your house because of the work,” the man replied.

“Did you ask the woman from India?” Kartan messaged back.

“Yes, I asked her, but she knows you, so she does not want to come,” the man told him.

“I did not know I am so famous,” Kartan texted.

The other man then asked an obvious question: “Why are all the people talking about you, and are scared of you?”

Kartan and Barai were charged with multiple felonies. The case against him and his wife was prosecuted by Eric Dreiband, assistant attorney general for the Department of Justice’s Civil Rights Division.

After an 11-day trial in March, Kartan and Barai were both found guilty of forced labor, conspiracy to obtain forced labor and committing fraud in foreign labor contracting. In mid-October, they were both sentenced to 15 years in prison by U.S. District Judge Morrison C. England Jr.

“The United States abolished slavery and involuntary servitude more than 150 years ago,” Dreiband said following the sentencing. “Yet, inhumane forced labor and deprivations of liberty and dignity persist because human traffickers proliferate modern-day slavery, and endeavor to exploit their fellow human beings for profit and other gruesome purposes.”

While several nonprofit organizations have been formed in California to combat international sex trafficking, the Little Hoover Commission has recently been evaluating whether the state has adequate resources dedicated to labor trafficking. The commission issued a report in October stressing that there is no centralized referral tool in California for victims of labor trafficking, nor is there any method of tracking the number of survivors, nor of evaluating the effectiveness of programs for victims.

“We still know far too little about the individuals who are harmed by this abusive crime each year, and do not yet understand how best to help these individuals recover and thrive,” Little Hoover Commission Chairman Pedro Nava wrote.

Ashlie Bryant, co-founder and CEO of 3 Strands Global, a nonprofit based in El Dorado Hills with experience in helping victims of both sex and labor trafficking, agrees that good data and statistics in California are scarce. She says that many people tend to think that labor trafficking happens primarily in the agriculture and cannabis industries, but ads placed abroad for restaurant, janitorial and housekeeping work is another major conduit.

“When you look at cases with people being brought over to be nannies or domestic servants, it’s important to remember it’s not happening the way smuggling happens,” Bryant explained. “Often times the victim is brought over with a debt to be paid off, and then the person will never let them to pay off the debt … The M.O. of taking away the victim’s passport and then threatening to deport them is also something that happens in many of these cases, along with telling the victim law enforcement is not going to help you. There’s a breaking down and caging of the mind.”

3 Strands Global is now making prevention and education training a major part of its mission to help the public recognize the signs of labor trafficking. Bryant notes that while awareness around sex trafficking has risen tremendously in the last decade, the same is not true for forced labor.