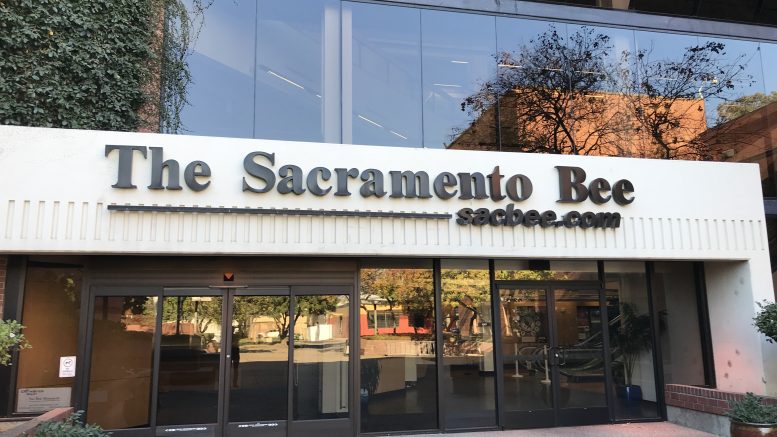 McClatchy Co., owner of The Sacramento Bee, announced July 11 that it was being bought by Chatham Asset Management, a hedge fund. (Photo by Foon Rhee)

Re: “A dark day for The Sacramento Bee” by Jeff vonKaenel (Greenlight, July 14):

I gave up on the Bee at least 20 years ago. Like the rest of the media, it only reports news that “fits” while ignoring everything else. It is not surprising that the SN&R owner praises it, though, since SN&R is just like the Bee, only worse.

Jeff vonKaenel can’t even take a break from being a crybaby snowflake fake news peddler long enough to write a farewell. Your crappy SN&R will meet the same fate soon. See, left bent fake news rags like yours have zero appeal to people who actually read. Mouth-breather liberals can’t be bothered, so your weak publications die by the wayside. Try reporting the news instead of whining about an election that was won four years ago and maybe you will be taken seriously. Until then have fun lining bird cages.

Print media, especially that is marginal or even subpar, has no chance. I have a subscription to the New York Times, which costs me $1 week and for national and international reporting. It is quality journalism. I tried the Bee for a year and found it to be completely useless, but did give it a try with a GroupOn special, and for $1 a month I still wouldn’t purchase it. If I felt I need a California newspaper, there are many better to choose from but California is covered everywhere so really no need.

I like the Bee and wish everyone who works there well. Stop the name-calling blame games. Let’s get on with creating and maintaining a newspaper that serves our community. I’d be glad to subscribe to keeping our Bee healthy. Good luck, hang in there, keep the faith.

It’s not a bad thing. Most news is swayed by big money, racist opinions and fear-mongering, and very little truth or facts.

I dropped my subscription after many years when the op-ed page started to be on the front page. Too biased for me! Very disgusting!

I am a lifelong liberal, and the Bee makes me sick. Lunacy is not liberalism.

I notice almost all of the comments are calling the Bee leftist garbage. I don’t know one way or the other, but it does make me ask myself where those same people do actually get their news from. I think I have a pretty good idea, and if I’m correct then it just adds to the absurdity that now manifests itself into everyday life in America.

It is a dark day indeed for real news. For people (overwhelmingly right wingers) who believe The Enquirer is actual news– they will now get their fake news delivered to their doorstep, sporting the Sac Bee name.

Journalists vs. the NSA

1 Comment on "Letters: The Bee,’liberal’ media and local news"