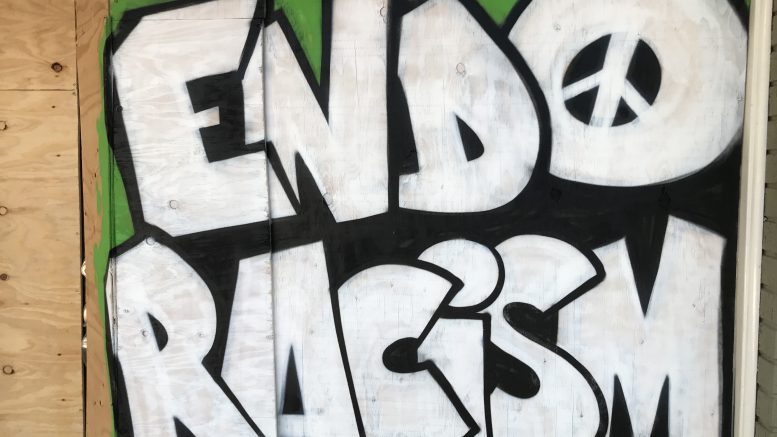 Some Sacramento businesses that boarded up during the Black Lives Matter protests sent messages of support. (Photo by Foon Rhee)

Essay: The goals of The Liberation Collective for Black Sacramento go far beyond police reform

When people ask if our mission has changed as we evolved from Black Lives Sacramento to The Liberation Collective for Black Sacramento, I can only assume they haven’t seriously taken the time to know and understand the history of this country and the fact that America wouldn’t be what it is had it not been for Black bodies.

The illusion that free commerce and fair competition catapulted America into a world power fails to consider how America and white men became the leaders of the free world at the expense of Africa’s most looted and prized possession—its children.

The very foundation of this country was built on the backs of Black people, while a false ideology known as white supremacy emerged, creating a racial divide and manifesting into racism and systemic oppression.

So, no, the mission hasn’t changed. The fight for Black liberation has literally been 400 years in the making.

It was in 1619 when the first Black bodies were documented and sold on auction blocks as property in a chattel slavery system, offering no compensation for their labor or lives sacrificed. Compounded acts of oppression caused the first slaves to rebel and to build black cities after emancipation, including, but not limited to Tulsa, Oklahoma’s Black Wall Street. It is the reason why Blacks showed up in droves during the 1960s civil rights movement—and why today we scream, “Black Lives Matter.”

Our demands are the same: reparations, equity, justice, liberation and a redistribution of wealth and resources. Equally, there is a grave need to address the harm and acknowledge the intentional, systemic polices put into place to keep the Black community from thriving and building generational wealth.

Every tactic to abolish and rebuild the existing broken system is necessary—marching in protest, rewriting laws, collaborating with other marginalized groups and so much more.

In this moment, the power of the people coming together regardless of race and socioeconomic status, the exposure to incidents of state-sanctioned violence and the COVID-19 pandemic have changed the landscape of what it means to fight for humanity and equity. We are not our grandparents, who thought equality was possible. We know there must be concerted efforts to redress the harm and trauma that has in many ways ravaged the ability of Black people to live with the expectation of peace.

“Many are finally realizing when Black Lives Matter, everyone wins. At the end of the day, isn’t that what we all want—the value of Black lives to be actually seen as human.”

In this moment, when there is more urgency to act than ever before, we have come together in ways that show we are in solidarity, forever. Many are realizing that they have been turning a blind eye to state-sanctioned violence, and that taxation without representation has been killing the Black community since this country was built and now directly impacts their ability to survive.

Standing up for Black lives is evident in the massive number of non-Black faces showing up to challenge the status quo and protest what we know as American hypocrisy. Many are finally realizing when Black Lives Matter, everyone wins. At the end of the day, isn’t that what we all want—the value of Black lives to be actually seen as human.

So, the mission hasn’t changed, but the pursuit for justice is moving forward. Defunding the police is happening all over this country; turning power over to the people is happening; providing resources to manage mental health, poverty and homelessness is happening; and addressing educational inequities via ethnic studies is happening.

We are seeking long-lasting change that reflects humanity and nothing less.

A beautiful garden, a big sale