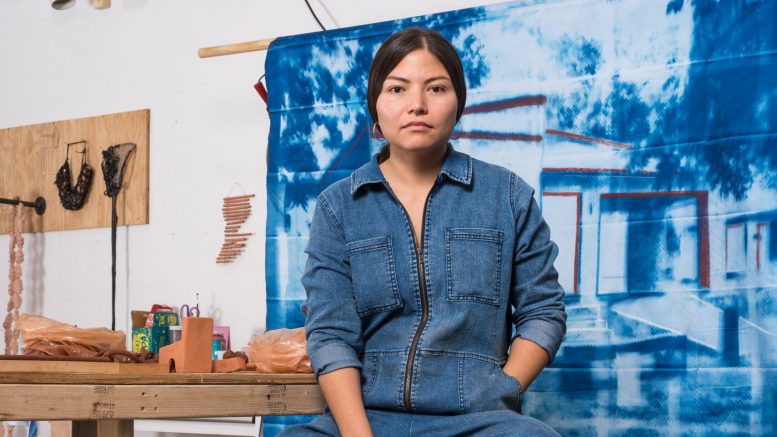 “It was difficult to feel like I understood what was going on in school because of the language barrier. In the art classroom, that wasn’t really necessary,” says artist Aida Lizalde. “I knew how to draw. The language was different, and I could acquire that language and use it successfully.”

Lizalde was born and lived in Mexico for 15 years before she moved to Stockton on her father’s work visa. The shock of moving to a new country with a different culture was a difficult transition, but was made a little easier with the support of her art teacher, Ms. Tsutsui.

“She spoke a little bit of Spanish, even though she was a white lady, and she was very enthusiastic and very encouraging of my sister and I and she thought we had talents,” Lizalde said.

Tsutsui helped Lizalde apply for summer art programs and begin her career as an artist. Unfortunately that didn’t stop the company where her father worked from closing, leaving Lizalde and her family without a visa.

“My parents kept trying to figure out ways to fix our documentation, but once we were overstayed, there is really no path to citizenship,” she said. “I was undocumented for eight years.”

Being a teenager can be difficult enough without the added pressures of being undocumented but Lizalde’s mother instilled in her the belief that there is always a way to make her life better.

“It’s very frustrating to be told that when you’re undocumented,” Lizalde said. “But you just learn to realize that no matter how much you complain about it, you’re still going to have to figure it out. Figuring it out for me also means that maybe it can potentially open the path for other people to figure it out, especially in the arts.”

She ultimately became a U.S. citizen in 2018— and voted for the first time in the March primary— but it was a bittersweet moment. Because the Trump administration imposed a travel ban on seven predominantly Muslim countries, her feeling of security in her adopted country was undermined.

“I didn’t necessarily feel like I wanted to consider myself a U.S. citizen,” Lizalde said. “It was kind of scary thinking, ‘Oh, I thought I was safe, now the political climate is changing and maybe I’m no longer safe unless I become a citizen.’”

One of the challenges facing Lizalde was maintaining her identity amidst her political and social anxieties. She talks about how she would avoid speaking Spanglish, how reaching adulthood in America shaped her in ways that Mexico hadn’t and how, though she was born and spent her childhood in Mexico, as of June she had spent as much time in America.

“I’m in the middle of the middle of two worlds in a sense, because there’s this Chicanx identity in the United States and it kind of has a political pull,” she said. “I always felt like ‘No, I’m Mexican,’ but I’m not fully, totally Mexican.”

Identity plays a big role in Lizalde’s artwork. A piece titled ID Tabla shows straight-on portraits of the artist in cyanotype with clay pucks inscribed with stars and the letters “U.S.A. E.E.U.U.” blocking six of the portraits. The expressions displayed by Lizalde are plain like grainy passport photos.

Another piece titled Binomial features the artist in a performance, wearing an enormous necklace that hangs heavily on her nude body. She is surrounded by darkness during the performance and her hair hangs over her face; the sense of the weight of the necklace is palpable.

Lizalde often experiments with different mediums to express her thoughts and feelings, including video and textile construction materials. But her most important medium is ceramic. As she writes on her website: “I mold and manipulate clay to explore tactile sensations and think about the connections between my body, labor and the world around me.”

“Ceramic is something that we all feel some familiarity to in one way or another,” she said. “It’s also something that is so ancient, but yet can be so conceptual and new.”

In the fall, Lizalde will be participating in an artist residency program in Mexico City called Casa Lü to work on a project exploring the decolonization of indigenous cultures and the new cultural identities people will make for themselves.

“Our lives have been dictated a lot by Western thought and by European Western thought, and because of that, a lot of our lineage has been erased,” she said. “That makes them create a different identity for themselves that is aside from white Western culture. Even if they start to create their own rituals and to make them up.”