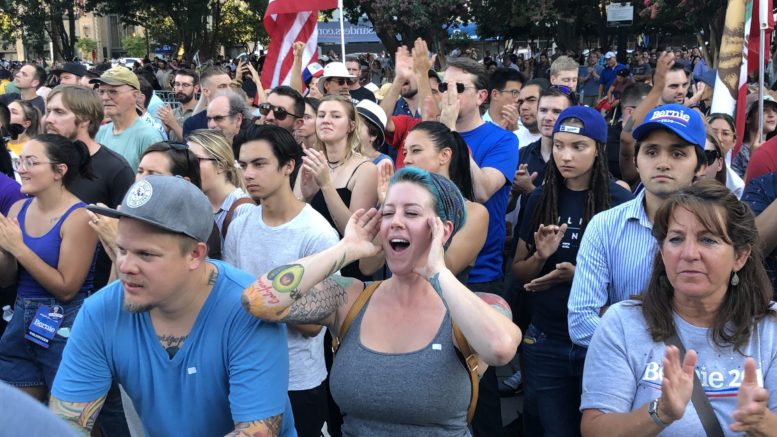 Vermont Sen. Bernie Sanders’ visit to Sacramento last week confirmed one thing about the 2020 presidential race—California will likely play a decisive role in determining who challenges President Donald Trump for the future of this country.

“I need your help to win in California because the candidate who wins here in the largest state in the country will in all likelihood win the nomination,” Sanders told a crowd of more than 4,000 during an Aug. 22 campaign rally in Cesar Chavez Plaza.

That hasn’t always been the case. In the last two decades, with Iowa and New Hampshire monopolizing early-bird primaries, California’s role has often been to ratify a choice that was all but already made.

Over the last four presidential primaries in which the incumbent participated, California voters backed the candidate who would be his (yes, his) opponent each time. In 1992, voters in the state favored Arkansas Gov. Bill Clinton, the eventual Democratic nominee, over their own governor, Jerry Brown, by 7 percentage points, which should be a lesson to California Sen. Kamala Harris that the home crowd can be fickle.

After running away with results at the California polls, these three challengers ultimately lost their contests.

That primary was also California’s earliest since at least 1992, occurring in February 2008, Black History Month.

After the state’s last two presidential primaries in June, California moved up the 2020 primary to March 3, when it’ll be one of 15 states participating in the super Super Tuesday. Only four states—Iowa, New Hampshire, Nevada and South Carolina—will hold earlier nominating contests.

A recent Survey USA poll for KGTV-TV and the San Diego Union Tribune showed Biden leading with 25% of likely voters and Warren second at 21%. Sanders edged Harris for third with 18%.

Four years ago, Sanders dueled Hillary Clinton to a close second in California, about 400,000 votes and 8 percentage points behind. In Sacramento County, Clinton beat Sanders by 10 points.

On Aug. 22, the indefatigable Sanders stumped for a full 30 minutes under a steamy Sacramento sun, just hours after he toured wildfire-devastated Paradise and held court during a town hall in nearby Chico. To the Sacramento audience, he hit upon his major theme of calling for a political and economic revolution that wrests the levers of power from the wealthy and hands them to working-class Americans.

“We understand that to transform this country, it is not just good enough to defeat Trump,” he bellowed. “We have to take on the whole damn one percent!”

An incident that began unfolding before Sanders took the stage illustrated how entrenched the status quo is.

As UPTE-CWA vice president Joaquin Chavez localized Sanders’ support for unions, a lanky spectator bellied up against the railing began shouting, “What about the homeless?” While a media representative calmed the man down by describing Sanders’ affordable housing plan, several police officers later arrived and arrested the man for a public disorderly charge. The moment provided a visual juxtaposition at a rally where the candidate called for both criminal justice reform and a redistribution of wealth.

Sanders hollered that “500,000 people should not be sleeping on the streets tonight,” unaware police led one of them away in handcuffs.

While a small contingent of Proud Boys loitered on the park’s outskirts, the neo-fascists did little more than verbally troll Sanders supporters, a dozen or so of whom gathered to heckle the hecklers after the candidate ended his speech and departed for San Francisco.