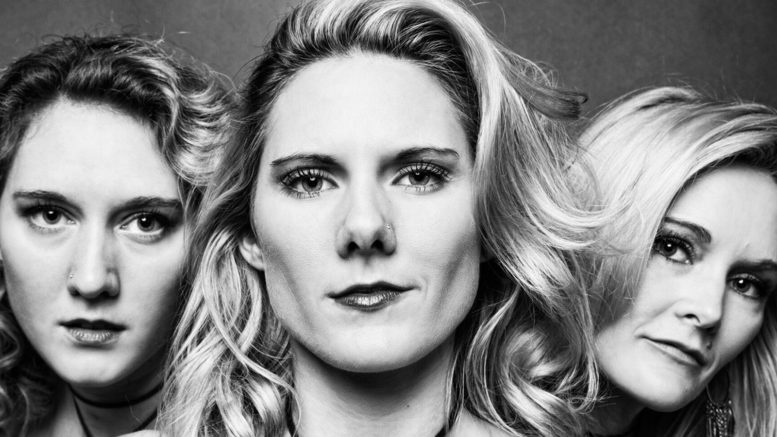 It’s a weekend night at the Opera House Saloon where a sea of audience members donning cowboy hats and flannels crowds the stage as The Ariel Jean Band is about to perform.

The bright multicolored stage light illuminates Jean’s wavy bleach blonde hair as she and her two sisters tap their cowgirl boots to the rhythm of their song “Coors Light Country Girl” while piping out the lyrics: “She’s a bad babe rocking that sun-kissed tan / Mama taught her how to shake it for a man.”

The hip-swaying number leaves no one in their seat. During intermission, while the rest of the band goes to the bar, Jean heads backstage to quickly rummage through her duffel bag, removing extra clothes and makeup to find her breast milk pump.

“On our breaks, I would go in the back office and pump,” Jean says.

Afterward, she quickly shoves the device back into her bag and ran onstage to finish the other half of the set.

That was last year, when during the peak of her music career Jean became a mother.

This year, Jean is nominated for a SAMMIE in the Country/Americana/Alt-Country category. But she’s not the only local country singer who has had to balance motherhood and her passion for music. Fellow nominees Noelle Fiore, of Noelle and the Deserters, and Jennifer Moore, aka Jennifer Belle, are also country singers who understand the wonderful—and challenging—experience of being a mother and following their dreams.

In 2009, when pop goddess Lady Gaga’s “Just Dance” dominated the airwaves and neon-colored skinny jeans were all the rage, a teenage Jean discovered the sassy and genuine sound of Miranda Lambert. At age 12, she picked up a guitar and began writing songs, but Lambert’s music was what Jean says made her fall in love with the country genre.

It wasn’t until 2016, when Jean and one of her sisters sang backup for local country band Blackburn Bullet, that she decided to create The Ariel Jean Band with both of her sisters. Since then, the trio has opened up for national acts, including the Eli Young Band.

Everything changed in 2019 after Jean and her husband found out they were expecting a baby. After their daughter Chevelle Taylor was born, Jean says she felt even more inspired to keep playing music and even wrote a song called “Heartbeat,” about the first time Jean heard her daughter’s heartbeat.

“[My daughter] inspires me everyday to become stronger,” Jean says.

As for Fiore, she experienced motherhood a little differently. Originally from New Mexico, she describes her music as “Southwestern vibes” with narrative elements.

“Country music gave me that platform to be able tell stories through songs,” Fiore says.

A longtime fan of folk music, Fiore was drawn to artists such as Emmylou Harris. She’s also inspired by female country legend Loretta Lynn, pulling from her bold humor and incorporating that quality into her own music.

“I really appreciate Loretta Lynn because I think she paved the way for many female country singers,” Fiore says.

When Fiore met her now-husband in Nevada City in 2013, the two ended up moving to Sacramento and eventually got married. She welcomed her new roles, not only as a wife, but also as a stepmother to her husband’s then 12-year-old son. She describes their relationship as “strong and solid.”

Fiore stepped onto the Sacramento country scene in 2018 when her band, Noelle and the Deserters, performed at the Hideaway during a fundraiser she organized for Bradshaw Animal Shelter. Still new to the local scene, Fiore says she enjoys the challenges of balancing her love for playing music—and since her now 19-year-old stepson is out of the house—with her life with four dogs.

“It can be difficult, but I tend to function well in chaos,” Fiore says.

Jennifer Moore, originally from the Bay Area, juggles having two girls with her time in the spotlight. Both daughters aspire to be in the music biz just like her.

“Being a mom, you try to do the best you could do and be a good role model,” Moore says.

She recalls being a young girl herself, running around her grandparents’ house singing Patsy Cline records. She was introduced to the local country music scene while out with her friend one night singing karaoke. After belting out Jewel’s “Who Will Save Your Soul,” she was approached by someone at the bar who asked her to audition for the cover band Rhythm City Allstars, which she did.

After that, Moore recorded some original songs in a local studio and decided to email a bunch of Nashville producers with her piece “A Road of Dreams” in 2018. She later signed to JGSII Records, a Nashville independent label. There, she recorded her first EP last year with two of its songs “Ex” and “Moving Day” debuting on the Indie World Charts.

Still, Moore says she couldn’t have gone this far without following some sound advice—advice she passes onto her two daughters.

“Never ever let go of your dreams,” she says. “Stay true to yourself, follow your instincts and your heart and you can’t lose.”

Be the first to comment on "On motherhood and country music"