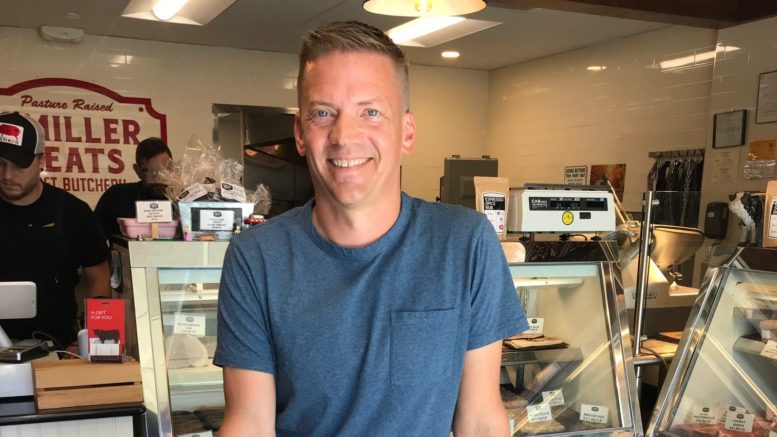 Gregory Berger shares his passion for bread baking with Sacramento

As a graphic designer who focuses on local nonprofits and restaurants such as Fairytale Town and Dos Coyotes, Gregory Berger is also a well-seasoned and award-winning baker. His specialty? Bread.

Berger has it covered, whether it’s fluffy hamburger buns, rectangular Pullman-style loaves or trendy Instagram demos that show home cooks how to create their very own sourdough starter. Last September, he released his first cookbook, Buns & Burgers Handcrafted Burgers from Top to Bottom ($24.95, Mango Publishing). Inside are more than 60 recipes for delicious burgers and accompanying buns such as The Elvis Burger (bacon, fig jam, spicy honey) paired with a round Peanut Butter Bun, or Cod Cake Silders topped with a sweet pickle rémoulade sandwiched between jet-black charcoal buns. Buns & Burgers is an easy-to-follow guide for those looking to stay busy in the kitchen by baking homemade breads during a time when grocery store shelves run bare. Over the weekend, Berger shared a new video on his Instagram page, @thefreshbreaddaily, that showed his followers how to make simple hamburger buns in just three-and-a-half hours.

Berger spoke to SN&R about sourdough’s newfound popularity, life during what he calls the “upside down” and what sparked his passion for dusting everything in flour.

How did you get into baking?

I’ve always been into cooking, that was always a big thing of mine, but I didn’t start baking until about eight years ago when my son was a baby. I work at home as a graphic designer, and so he was home with me and I suddenly had all these hours to fill where I was working, but I was at home and needed something else to do. I read Michael Pollan’s book, Cooked, and he had a chapter in that book about sourdough. So that just intrigued me. I’ve always liked project-cooking, the more steps the better. It took off from there, and then about five or six years ago, I entered the bread into the California State Fair and then I won. And then, I’ve won blue ribbons every year since.

Tell me about Buns & Burgers.

As I got more and more into bread, I decided I wanted to write a cookbook about some aspect of bread baking and realized there wasn’t really a cookbook out there that focused on hamburger buns. There’s a million cookbooks about how to cook a hamburger, but usually those cookbook have one recipe for a basic bun.

I started jotting down recipes and realized that it would be a fun format to have a burger for each bun. The book has 32 different buns and 32 different burgers.

What is it about bread baking that you enjoy so much?

I love the whole aspect of your local food chain and the whole interaction with the different people. In order to make a good hamburger, we have access to V. Miller Meats, and they’re getting their meat from sustainably local places and then he’s processing it and selling it to you. By making this hamburger, you’re supporting V. Miller, and he’s supporting the rancher, and then if you go to your farmers markets, you can meet the farmer who’s actually growing the lettuce that you’ll be putting on your burger. I just love completing that circle knowing where everything on your plate is coming from and who did each part of that. Now I know where my buns came from because I baked them.

What’s a good bread for beginners to try?

To me, hamburger buns are the easiest. It takes a couple more ingredients than you might have, but it’s basic ingredients: all-purpose flour, yeast, egg, butter, milk and salt. If you have those six simple ingredients, you can make it from start to finish in about three-and-a-half hours without a lot of skill. And if you have hamburger buns, they don’t have to be for hamburgers. You can make breakfast sandwiches or a ham sandwich for lunch.

Yeast seems like the most intimidating ingredient. Any tips?

I think people get intimidated by yeast because it changes. You open it up and it’s the little grains, and then you have to do something to it. But if you have active, dry yeast, the recipe that I have for hamburger buns, everything goes into the mixer at once and you don’t have to do anything special to it. But some recipes call for putting the yeast into some warm water to activate it first, but it also can get activated by just putting it in with other warm ingredients.

A Pullman loaf and that’s actually the name of the pan that you cook it in. It’s kind of like a brick shape. It’s a square pan that has a lid that slides over the top of it and they actually used it in California way back when the railroad was going and they would bake the bread on the actual rail cars. They invented these pans so that they could stack them in the ovens. They had small ovens, so they would bake as many as they could at the time. The bread comes out in perfectly rectangular loaves. I love the way it looks and it makes a really good loaf of bread, too. It’s perfectly square sandwich bread and I have a 9-year-old, so he doesn’t necessarily like the rustic-looking tangy sourdough, he would rather have the brioche-looking white bread.

Sourdough bread-making is trending big time. Why do you think that is?

Since the “upside down” began, I had so many people texting or messaging me how to make a sourdough starter, because they couldn’t find yeast or they were asking me if I could give them the starter. I could, but then I’d have to go to their house. So I decided to film a little how-to video on how to do the sourdough starter. Immediately, there were hundreds of people watching at a time and then I had strangers asking me, “Mine smells like this am I doing this right?” The following video I did was how to make the sourdough loaf.

What do you make with your homemade sourdough?

With sourdough bread, you’re making your sourdough starter. So when I make sourdough, you can turn that into a loaf of bread, and then in the morning you can put avocado on it and make avocado toast with an egg on it. Then you can not bake it and you can save that dough and turn it into a pizza that night with whatever toppings you have.

What are some sourdough starter tips?

The sourdough starter is the yeast. You’re finding the yeast from the air in your kitchen and then you’re grabbing it into the flour and water mixture and then it starts fermenting. That’s the thing right now. A lot of people keep saying they can’t find regular yeast at the store. So if you’re making sourdough, you’re making the yeast essentially.

You start off on the first day with 1 cup of water and 1 cup of flour and mix it up. Then, you cover it and let it sit for 24 hours. Then the next day, you look at it and it most likely looks the same. Pour some of that mixture out and add a little more flour and a little more water. You do that process for about five days. You have yeast in your kitchen, and outside, all around us. We have the same kind of yeast and bacterias that San Francisco sourdough has, just like anywhere in the country has that same yeast and bacteria just naturally floating around in the air.

What would you say to those curious about bread baking?

I think the main thing with bread is that people think “I’m not a scientist, I’m a cook.” … The main thing is just try it and you might find out that it’s not as hard as you think it’s going to be. You can make a better loaf of bread and you can always be better, but just by trying it you’re going to most likely end up with a pretty good loaf of bread.

Be the first to comment on "15 Minutes: Dusted in flour"