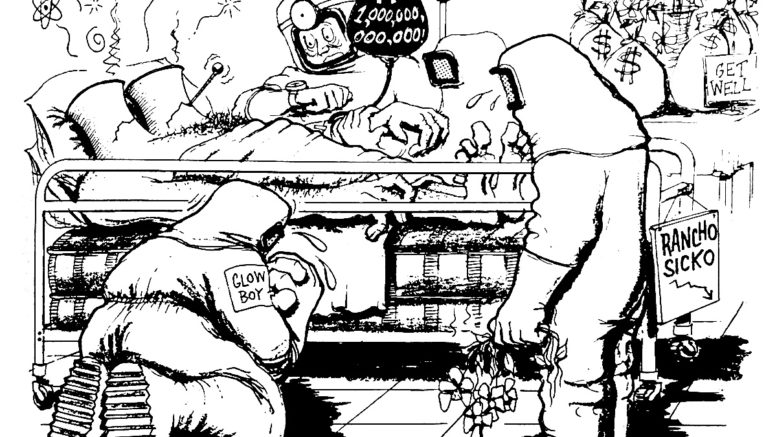 The very first cartoon SN&R published was a 1989 illustration by John Kloss that took on fears surrounding nuclear contamination of Rancho Seco.

Anyone who’s seen a prehistoric cave drawing already knows that cartoons are exponentially older than the written word, yet they don’t always get the respect that should come with advanced age.

Maybe blame us mono-talented writers. We only have one way of telling a story and have somehow convinced you that two dimensions are better than three. But the truth is that serious journalist types owe a huge debt to the professional doodlers who send up or enthusiastically ignore whatever’s happening in our world.

Ever since Richard Felton Outcault’s The Yellow Kid became the first comic strip to appear in an American newspaper 124 years ago, the funnies and the news have gone together like cream and coffee. That relationship is arguably more symbiotic within alternative weeklies, which embrace the absurdities of political and cultural life that establishment media typically ignore.

That’s not to say we’ve always preserved a space for comics. The rapid decline in traditional advertising revenue has just made it tough. According to our online archives, it’s been more than eight years since SN&R published an editorial cartoon (a John Kloss illustration from the height of the Occupy Sacramento movement, titled “Treedom of Speech”). Since then, we’ve flirted with the funnies, most recently with the Serene Lusano-created, Devon Mc Mindes-drawn GoatKidd strip in our Cannabis section.

But I, for one, miss having a front-of-book comic setting a big, bizarre tone for the content inside. Comics are the ultimate gateway to media literacy. This issue is an attempt to reboot that tradition.

We received nearly 50 submissions from artists ranging in age from 7 to 81—many of them just before the Jan. 16 deadline; of course you cartoonists are procrastinators. Designer Sarah Hansel corralled a judging panel that somehow argued its way down to a top 12. Our staffers and contributors got in on the action, too.

Together, we’re presenting a collage of what life in and around Sacramento looks like inside our heads. It’s by turns funny, freaky and fearless.

Comics have come a long way since an artsy cave dweller scrawled a skinny bovine creature (who bears a not-insignificant resemblance to Marmaduke) on an Indonesian wall more than 40,000 years ago. I, for one, can’t see where they go next.

Be the first to comment on "The Comics Issue"