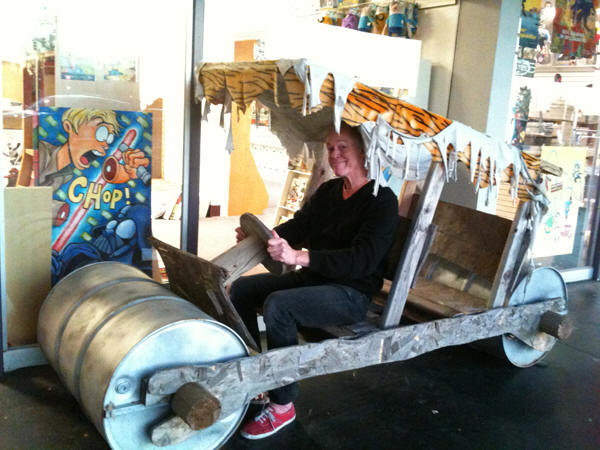 I totally thought this was some joke at first but, no, it’s true: At some point between Saturday, December 14 and 15, someone stole a Flintstones replica car from its usual spot parked outside of World’s Best Comics & Toys on Watt Avenue.

Downey says the car, which had only been parked in front of the shop for two weeks, is worth about $500 but its appeal is priceless.

“Kids love it of course, but then again the adults loved it too. Everyone remembers The Flintstones,” Downey told a reporter from KTXL Fox 40 Sacramento.

Downey is currently reviewing security footage from the outdoor cameras installed at the nearby Country Club Lanes. In the meantime, someone emailed him some fuzzy pics that reportedly show the car being towed off by a truck in the dead of night.

The story’s already gone national with both CNN and the Huffington Post picking it up. Surely, such prehistoric thievery doesn’t stand a chance in the Internet Age?

The vehicle, which weighs 200 pounds, isn’t technically driveable (of course not, it’s foot-powered …duh), was likely stolen for the sport of it–not for parts. But then again, who knows?

Check out this special link on the World’S Best Comic’s web page for more information on the stolen car and how to help.

No questions asked upon return, Downey says, and the reward is a six pack of Cactus Cooler. Oh, and Fred Flintstone’s everlasting gratitude of course.