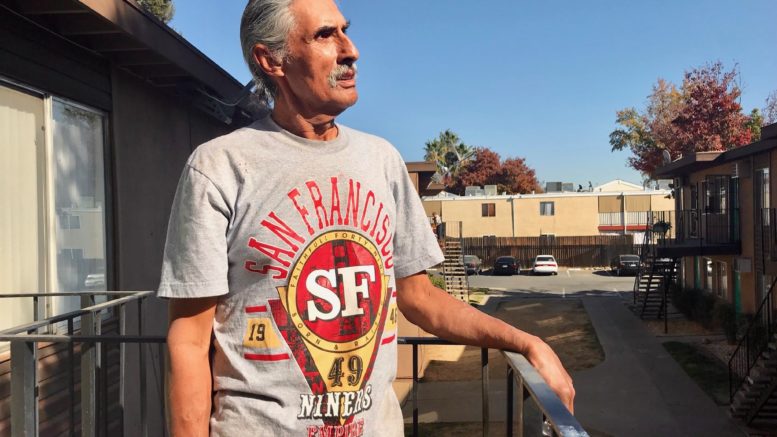 Richard Scott, a disabled veteran in Rancho Cordova, looks out on his apartment complex for one of the last times. Photo by Scott Thomas Anderson

On Halloween, a disabled veteran named Richard Scott sat in his apartment waiting to face something truly frightening—the threat of being forced from his home.

After nine years of being a reliable tenant at the Gold Run apartments in Rancho Cordova, Scott and his longtime partner Joyce Fagget discovered a loose piece of paper laying several feet from their door. It was from the complex’s new ownership and it informed them that they had 60 days to leave their one-bedroom unit. It was the start of a no-fault eviction. If they didn’t comply, they’d be hit with a court order.

For Scott, the news was jarring. He’d always worked closely with the previous owners, even holding their advertisement signs along the street and helping clean abandoned apartments. It also stung that the new owners had finally replaced a kitchen floor damaged by stormwater. And Scott had been given a teasing glimmer of hope when he heard of a new state law—Assembly Bill 1482—that is supposed to protect renters in California from no-cause evictions.

That hope quickly vanished when a friend who works in property management informed Scott that he and his partner had been booted on a timeline that meant they’d be out exactly one day before the new law’s protections kicked in.

The notice, which Scott showed to SN&R, was dated Aug. 26 and instructs the couple to be out by Oct. 31. According to numerous tenant advocacy groups, any contested 60-notice eviction served on Nov. 1 or after bleeds into January, thus offering a legal defense under AB 1482, which takes effect Jan. 1. The law also prevents landlords from raising rents more than 5% plus the local cost of living and no more than 10% under any circumstances.

The ownership group that issued Scott and Fagget the eviction notice, Baniqued Guzman Asset Management, is based in Pinole. Scott says he kept trying to call the company to see if he could afford the new rent, but no one called him back. Panicked, he and Faggett drove all the way to the Bay Area to speak to the company’s CEO, Marc Guzman. They say Guzman’s staff appeared genuinely surprised they made the trip, and told the couple he wasn’t available.

And so Scott and Fagget spent their Halloween making desperate phone calls to apartment complexes across Sacramento County. Scott, a retired laborer and Air Force veteran who uses a nebulizer for lung problems, is on a fixed income. Fagget works as a home health care provider. Together, they have the money to rent a new place—though the local market suggests they’ll pay much more—but their main challenge is coming up with first and last month’s rent. They can’t afford what they see listed.

He’s not alone. The plight of an entire complex of renters recently hit with a mass eviction spilled into the Nov. 5 county Board of Supervisors meeting, as a vote for an emergency ordinance to protect them and others was narrowly defeated.

Lupe Arreola, executive director of the statewide group Tenants Together, told SN&R that her organization’s hotline experienced “a big spike” in calls about people being hit with large rent hikes or 60-day eviction notices to leave after the passage of AB 1482, which Gov. Gavin Newsom signed on Oct. 8.

Elliot Stevenson of the Sacramento Tenants Union said his group is hearing the same. “We’ve been hearing about this throughout Sacramento County, pretty much in every district,” Stevenson said. “The way we’re treating it now is, we’re assuming the timing is in response to the law. … What we’re seeing is a wave of evictions.”

Tenants being hit with no-cause evictions in apparent response to AB 1482 prompted the cities of Milpitas, Daily City, Redwood City, Pasadena and Los Angeles to pass emergency moratoriums that get their vulnerable renters through the holidays and into the law’s effective date.

After news broke that every tenant at the Bell Oaks apartments in Arden Arcade was being displaced on a suspicious schedule, county Supervisor Phil Serna brought a moratorium for the board to consider, saying that greedy landlords were victimizing tenants and “trying to game the system.”

Meanwhile, Supervisor Susan Peters asked Jim Lofgren of the California Apartment Association to contact the owners of the Bell Oaks apartments and “strongly encourage them” to reconsider the mass eviction.

As the emotional meeting got underway Nov. 5, Lofgren reported back from the podium. “The owners of the Bell Oaks apartments are not members of our association,” he began. “I want to make it clear that the California Apartment Association does not condone large-scale terminations on properties for the sole purpose of avoiding the impact of the new state law.”

Peters may have been concerned enough about Bell Oaks to dispatch a lobbying group, but it soon became clear she wasn’t going to vote for the moratorium.

“Honestly, my office has had two phone calls, and that’s all, to complain about this,” Peters told the crowd. “That’s the level of interest.”

But numerous residents had argued against that narrative during the meeting.

“This fear of displacement, it’s huge, it’s massive,” said Crystal Sanchez of the Sacramento Homeless Union. “I have people calling me in fear of becoming homeless. … Once these people end up on the streets, there is no ability to recover because most of them work minimum-wage jobs and they don’t have two-and-half times the rent to put into a new place.”

Niko Comtois, a tenant of the Crestview North apartments in Carmichael, told supervisors that her rent just went up by 43% and that she and her disabled mother are now being encouraged by the ownership to accept a “cash for keys” offer to vacate the premise entirely.

“All of this is happening so they can line their pockets,” Comtois said. “But they’re in a business where the product that they have is peoples’ lives.”

The emergency ordinance required a super-majority of four votes. While Serna and supervisors Patrick Kennedy and Don Nottoli voted “yes,” Sue Frost, the former owner of a real estate company, made it clear that wasn’t to be. Speaking to the crowd, Frost blamed the evictions directly on the state’s new tenant protections, arguing the law took away the “flexibility” that allows “good landlords” to set fair prices.

She and Peters were met with a chorus of shouts and jeers.

Nailing a note on City Hall

At the same time residents were imploring supervisors for help, tenant advocates were also gathering at City Hall. The new coalition Sacramento for Real Rent Control hung a huge banner on the front of the building demanding that the City Council put the Sacramento Community Stabilization and Fair Rent Charter Amendment on the March 3 ballot—or see them in court.

Some 44,000 registered voters signed petitions to put that version of rent control and no-cause eviction protections to a public vote. Council members, however, struck a compromise with some backers of the ballot measure, but not others, passing the city’s own less sweeping version in August. The ordinance caps annual rent hikes to 6% plus inflation, but no more than 10%, and also protects renters with more than 12 months of continuous tenancy from no-cause evictions.

At that point, Mayor Darrell Steinberg said he considered the ballot initiative dead.

The scores of tenants who showed up to City Hall on Nov. 5 say otherwise.

“The city needs to do its democratic duty,” coalition member Jonah Paul said into a microphone. “It’s time they stopped listening to their donors and did what’s right. … We can’t let their donors decide what’s best for us. There have been almost half a million dollars in campaign contributions to the City Council by real estate and landlord lobbyists.”

And, according to a public statement released by former Housing4Sacramento leader Michelle Pariset, there does seem to be a legal conundrum for the city regarding the ballot measure, which would limit annual rent increases directly at inflation, usually between 2% and 5%. Pariset was one of its three signatories. She’s now indicating she refuses to remove it from the ballot.

“There is no scenario in which I would undermine the will of the voters,” Pariset wrote in the statement.

That didn’t appear to phase Steinberg, who tweeted shortly after the rally, “The City Council adopted rent control and just cause eviction protections in good faith after extensive negotiations with proponents of the rent control ballot initiative. We have lived by our word. Others who gave their word should do the same.”

For Jovana Fajardo, Sacramento director for the Alliance of Californians for Community Empowerment, a legal fight with the city is worth it, especially if it gives tenants the chance to vote for tighter rent limits and a publicly elected rent control board. That kind of board could hold unscrupulous landlords more accountable.

As Scott and Fagget sat in their apartment on Halloween, contemplating the very real possibility of becoming homeless, the thought of living in a city with an elected rent control board sounded like a dream to them. Fagget said that since getting her eviction notice, good dreams have been hard to come by.

“I just don’t know the reason for any of this,” she said with a sigh. “It’s made me really emotional. It’s a lot of stress, and it’s hard to even sleep.”

Be the first to comment on "The last minute gouge"