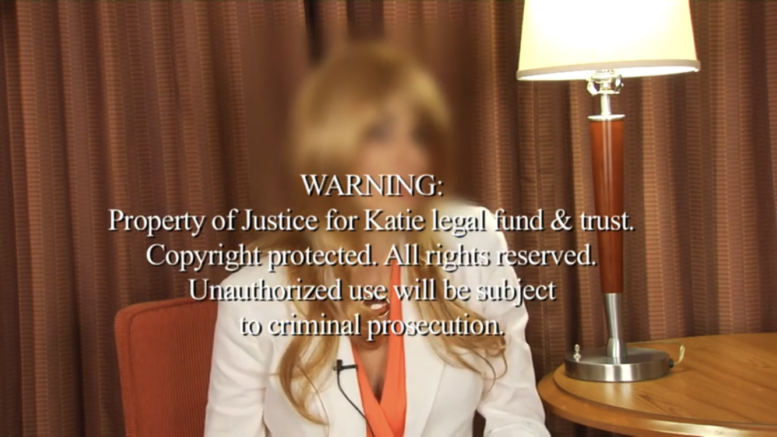 The woman using the pseudonym "Katie Johnson" appeared on camera in a wig to level her sexual assault claims against Donald Trump and Jeffrey Epstein.

A California woman who accused Donald Trump of raping her a quarter-century ago when she was 13 has gone to ground, says her former attorney, deepening the mystery surrounding “Katie Johnson.”

“Recent attempts to reach … her have revealed that she has disconnected her telephone number,” Evan Goldman, a New Jersey attorney who represented Johnson in late 2016, wrote in an email.

“Katie Johnson” and “Jane Doe” are pseudonyms the woman used to sue Trump and convicted sex offender Jeffrey Epstein in California and New York federal courts three years ago, before Trump was elected president in 2016 and before authorities say Epstein hung himself in a jail cell in August while facing child sex trafficking charges.

According to the filings, “Johnson” was an aspiring model in 1994 when, after a string of unsuccessful meetings with agencies in New York City, she was at a Port Authority bus terminal getting ready to make her cross-country trip back home. Instead, a woman told Johnson how she could make money and modeling connections attending parties. It was at these parties—allegedly featuring other underage girls and wealthy guests—that Johnson says she was forced to sexually gratify the future president on four occasions, each one escalating in its described level of depravity.

After their supposed final encounter, in which Johnson claimed she begged Trump to no avail to wear a condom, the complaint states, “Trump grabbed his wallet and threw some money at” the plaintiff and suggested she get an abortion.

The bombshell claims never gained as much traction as other Trump misconduct allegations, for several reasons. Johnson’s initial lawsuit, filed without an attorney, included a hinky phone number and unverifiable mailing address, and was swiftly dismissed in the Central District of California. Johnson abruptly withdrew her second lawsuit and canceled a press conference days before the election, citing fears for her safety.

The sum total was that the press didn’t know what to make of Johnson or those surrounding her, and moved on to other controversies such as the Access Hollywood tape and the Stormy Daniels payoff.

But since multiple women emerged this year with shockingly similar stories about how Epstein recruited and sexually enslaved them as young girls, some of the people who believed Johnson in 2016 say her claims should be reconsidered today.

“Katie’s story mimics those that have come out in the past several months,” Goldman wrote. “She was very forthcoming and also a very reluctant person. She only decided to do something when she saw that there was a chance that Trump could become President.”

Goldman and two other attorneys represented Johnson from Sept. 30 to Nov. 4, 2016. Before they represented her, Johnson’s first lawsuit was dismissed for failing to cite an actionable civil rights claim. It sought $100 million in damages and described in graphic detail allegations against both Trump and Epstein, a one-time financier accused of hosting underage sex parties for the obscenely rich.

SN&R corresponded via text with a person who identified as “Katie Johnson” in May 2016 and recently traced the phone number to a Southern California esthetician. Goldman said he couldn’t reveal Johnson’s true identity, but stressed that she “is and was a real person.”

“There were real threats which forced her to drop the law suit,” he added.

On the day Johnson was supposed to participate in a press conference arranged by attorney Lisa Bloom, whom the attorneys hired to conduct their media outreach, Johnson’s car and cellphone were stolen, Goldman said. “This freaked her out and that is when she decided not to go through with it.”

As for Johnson, Goldman says he has no way of contacting her. The attorney didn’t respond to questions about whether a blurred-out video purporting to show Johnson being interviewed was of his one-time client. But SN&R obtained what appears to be a letter from a combative “never Trump” conservative who arranged for the video to be made. The June 30, 2017 letter from Illinois political donor Steve Baer is marked “confidential,” directed to then-Special Counsel Robert Mueller and copied to numerous others, including “select” media.

In the 10-page document, which includes an unblurred image of Johnson from her video interview, Baer urges Mueller to investigate the claims of the pseudonymous “Katie Johnson,” writing that his group, Freedom Partners Trust V, while skeptical that the president colluded with the Russians or obstructed justice, does believe Johnson.

“The current President of the United States raped a 13-year-old girl in 1994,” writes Baer, who has been credited with other aggressive email campaigns.

House Democrats are currently in a formal impeachment investigation of Trump for openly urging foreign leaders to dig up dirt on former Vice President Joe Biden, a possible challenger to his reelection.