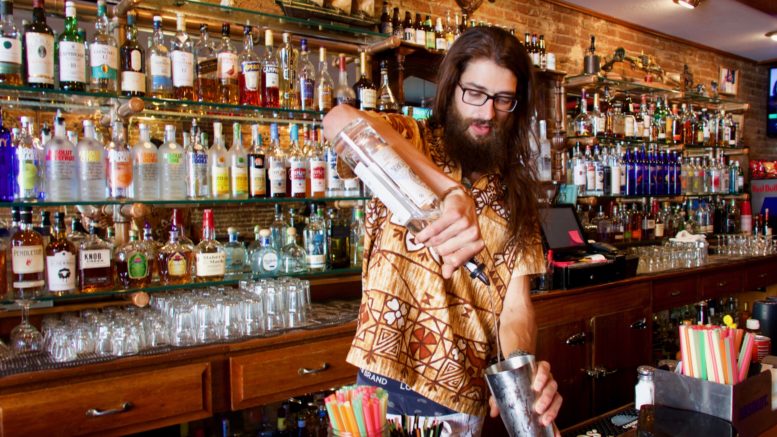 One of Nevada City’s favorite watering holes for locals isn’t a step back in time, it’s a place where time feels different

It’s not unusual to find someone in a pith helmet hunched over the bar at McGee’s, as if its clutter of triple-blended scotch and high-end spirits are the prime prey in an alcohol-inspired safari.

As it happens, it’s fine to sport touches of vintage attire in this 160-year-old Nevada City saloon. The pub openly embraces the shades of its white-knuckled past while using inventive décor to get the mine wheels of the imagination turning. That ambiance comes from a rare fusion of western Victorian grit and quirky industrial futurism. A lazy writer might describe it as the Gold Rush meets steampunk—an assertion guaranteed to annoy most people who love McGee’s.

Like many hideouts in Nevada City, this bar is a free-wheeling anomaly unto itself: evocative, transporting, a snapshot in time that doesn’t entirely give over its meaning. Oh yeah, it also has a jail cell under a trapdoor in the shadowed recesses of its basement.

For decades McGee’s has been owned by Richie Costello, who took the name from his late mother’s favorite moniker. It was the Irish-descended Mrs. “McGee” who first bought this saloon building that dates to 1852. Costello still tends bar there most mornings and then spends his afternoons by the front window, telling jokes, swapping stories and keeping the place a laid-back magnet for lushes and local characters.

Visitors are often entranced by what they see on McGee’s walls. Its artistic arrangement of gold gears, copper tubes and automated mine wheels were designed by Costello’s wife, Michelle, which, along with other oddities, brings a little escapism to the drinking. There’s the skull statue wearing aviator goggles. There’s the carved bear head in a top hat wrapped with Christmas lights. There’s the pilgrim musket modified to a hand-held blast cannon. It all says Nevada City—and it all says McGee’s.

The saloon’s slightly devilish style doesn’t stop there. Every Monday, it morphs into the only bar in the Sierra foothills that hosts a DJ-driven gothic night. That’s part of a broader music program that head bartender and general manager Marc Allen has brought. Allen also programs a monthly line-up of live bands and throwback dance nights. He says what he likes most about McGee’s is how inviting it is.

“If you come in here any day after 3 p.m., you’re going to see 20 or 30 people hanging out that have lived in Nevada City their whole lives,” he says. “It’s a range of people from their 20s to their 70s. It’s dynamic and diverse; and so are the stories that you hear.”

One person who also enjoys that atmosphere is McGee’s bartender Shawna Cleary, who originally hails from Dublin, Ireland.

“It’s unique in a lot of different ways, and it’s an old bar, too—the only Irish bar in Nevada City,” Cleary says. “People in this area like to eat good, and dance and wear clothes that are kind of … different. I like it here. It’s a good energy.”