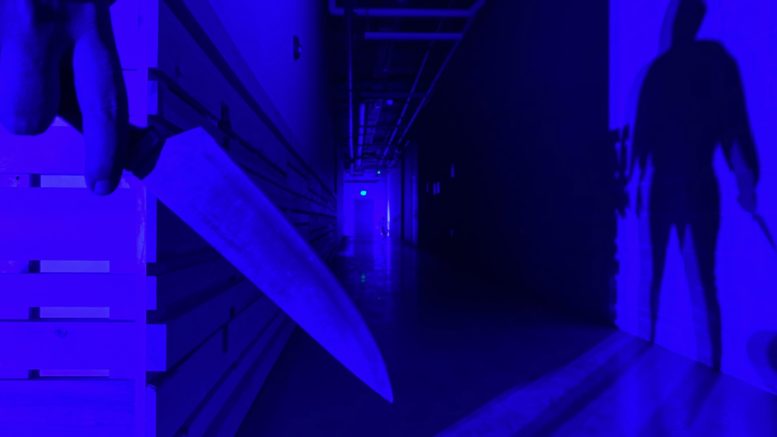 Photo courtesy of B Street Theatre

Are you looking for something spooky this week that doesn’t require you to leave home?

Check out “A B Street Horror Story,” a free online presentation from B Street Theatre at 7 p.m. Friday.

It’s a slasher adventure filmed in real time as B Street performer Peter Story struggles to escape a killer chasing him through the company’s home at the Sofia Tsakopoulos Center for the Arts, commonly known as “The Sofia.”

“I kind of I kind of pictured as like a first-person scare house,” Story says. “You’re seeing it through my eyes, because I’ll be performing on a tablet. And I’ll be switching the camera view so that you’re seeing what I’m seeing. So hopefully the effect is that you’re experiencing this with me.”

While the performance is structured as a Zoom conference between Story and troupe member Dana Brooke, a number of other B Street performers make cameos. Story is clear that all performers will appear either via Zoom or, in the case of the mysterious slasher, properly socially distanced.

The performance will comprise one continuous shot, much like Alfred Hitchcock’s Rope. The difference? If something goes wrong, there’s no second take, adding another layer of suspense to the event.

Story characterizes the performance as PG-13: “There is a bit of horror and a little bit of gore that probably would not be appropriate for younger kids.”

Peter Story, star of “A B Street Horror Story”

“A B Street Horror Story” is a unique event, but the B Street Theatre has been one of the few live performance venues that has managed to shift to a full calendar of online events. Programs include improvised performances, live music and “Re-Imagine,” a weekly program featuring artists of color from across the United States.

Story notes that the 25 year-old B Street Theatre was only in its second season at the Sofia when the pandemic hit.

“We still pinch ourselves that we went from this tiny little building on 27th tucked behind a baseball field nestled up against a railroad track to this gorgeous state-of-the-art performing arts facility nestled right in the heart of Midtown,” he says.

While performances continue online, Story relishes the opportunity to step back onto the Sofia stage for “A B Street Horror Story, giving opportunity for audiences to experience the Sofia, if only online.

Join the fright and fun at bstreettheatre.org/horror-story/.

Be the first to comment on "Halloween horror story"